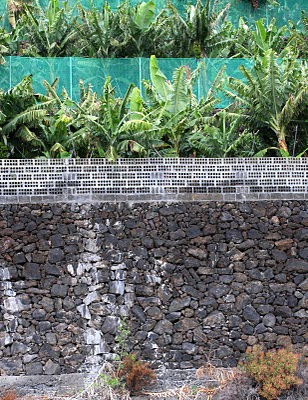 The most abundant diurnal raptor on the Canary Islands, the Common Kestrel (Falco tinnunculus), is encountered as two sub-species: canariensis on the central and western isles, and dacotiae on the eastern ones.

The species nests in cavities and ledges on rock faces, in pine trees and palms, in old crow and pigeon nests, in holes in the ground, and in derelict buildings, bridges and walls - such as the one shown above. In the photgraph, the nest cavity can be seen in the centre, roughly two thirds up the natural stone part of the wall, about 5 metres from ground-level at that point. 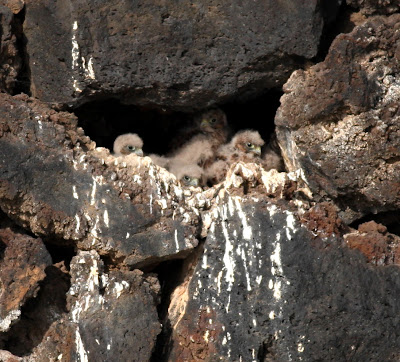 The four young chicks on the day the nest was first discovered (May 16th), with large amounts of fluffy white down still covering their bodies. 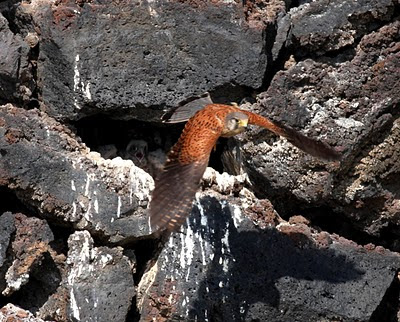 Only the male bird appears to deliver food to the nest, but all observations to date have been in the late afternoon. Perhaps mother feeds the chicks at other times of the day? 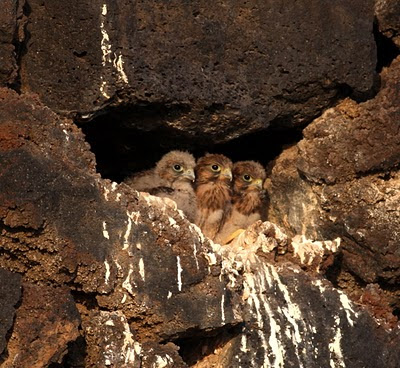 The fourth member of the family is hidden inside the cavity, which is becoming increasingly cramped as the birds grow. 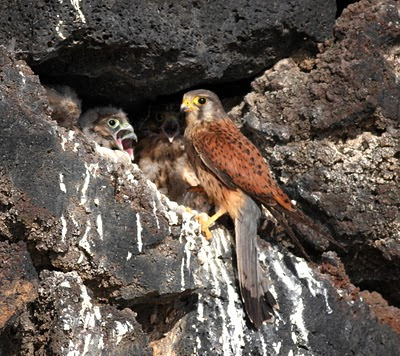 Another meal is handed over: first come, first served! 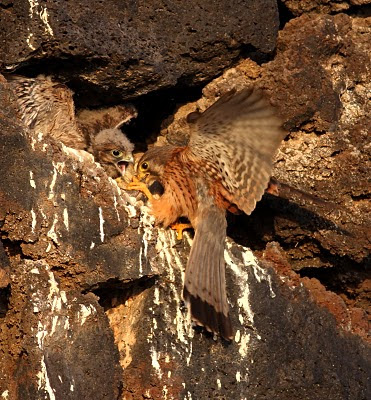 Lizards form a basic part of the kestrel's diet, although mice and large insects, such as dragon-flies, are also caught. The latter are typically plucked from the surface of ponds, and moorhen chicks are also predated on in this way. 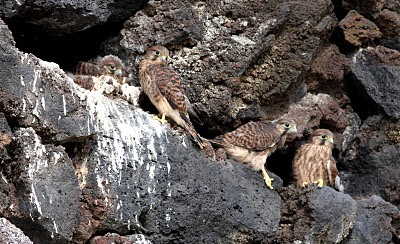 This recent image (May 25th) shows three of the young birds already clambering around on the wall outside the nest: the slightly less-developed runt is also visible inside the cavity. With luck, all four chicks will soon be fledged...

Note that all photgraphs (except the first) were taken from under a camouflage net at a distance of 20-30 metres, using a 400mm lens, to minimise disturbance.
Publicado por Robert Burton en 21:21 No hay comentarios: 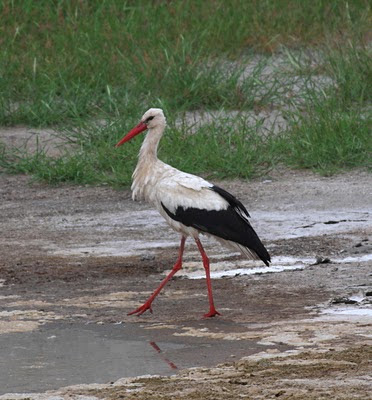 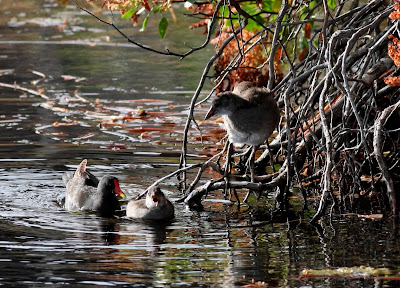 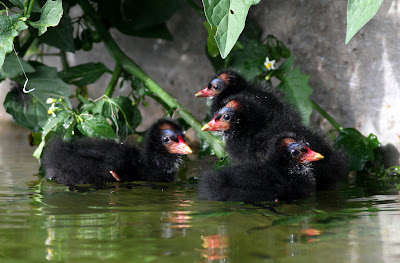 The solitary White Stork (Ciconia ciconia) appeared in an almost empty irrigation basin in the Las Martelas area on 07/05. Small numbers of this species turn up on the island almost every year at various locations, such as the rubbish tip north of Santa Cruz (Barranco Seco), where I saw a group of 3 birds in April 2007. There have even been sporadic breeding attempts in recent years, and the species possibly nested regularly on certain church bell towers in the past.

Cattle Egret (Bubulcus ibis) are fairly regular visitors to all the main islands and have been breeding on Lanzarote since the 1990s decade.

From the clutch of six Moorhen (Gallinula chloropus) chicks born in mid-February, featured in a previous post, two of the young survive at the time of writing and are past the "critical period". The irrigation basin is located in Las Martelas and still has good water levels and plenty of cover.

The last photo shows 4 of the 5 chicks from a Moorhen clutch born at the end of April at a basin in Tazacorte. Even chicks of this size are able to reach dry land by climbing up the stalks of the overhanging tomato plant visible in the image.