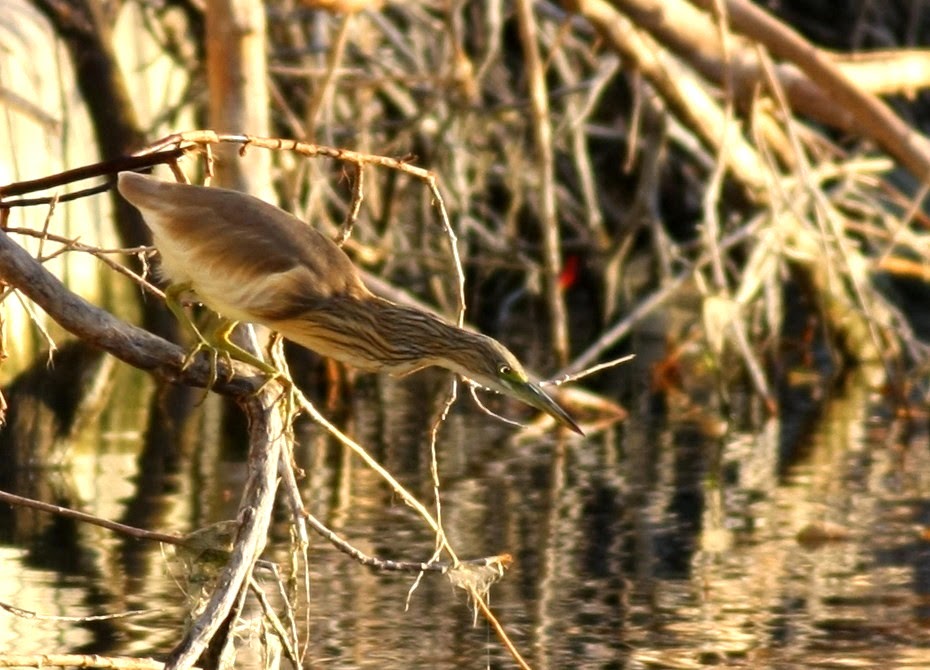 The Squacco Heron (Ardeola ralloides), first detected on Jan 13, was still at the same irrigation pond in Tazacorte at the end of the month. This evening, I was able to photograph the remarkable postures adopted by the bird while it hunted for prey; on one occasion it even plunged into the water to catch something edible. The first picture, above, is probably the best of the bunch. 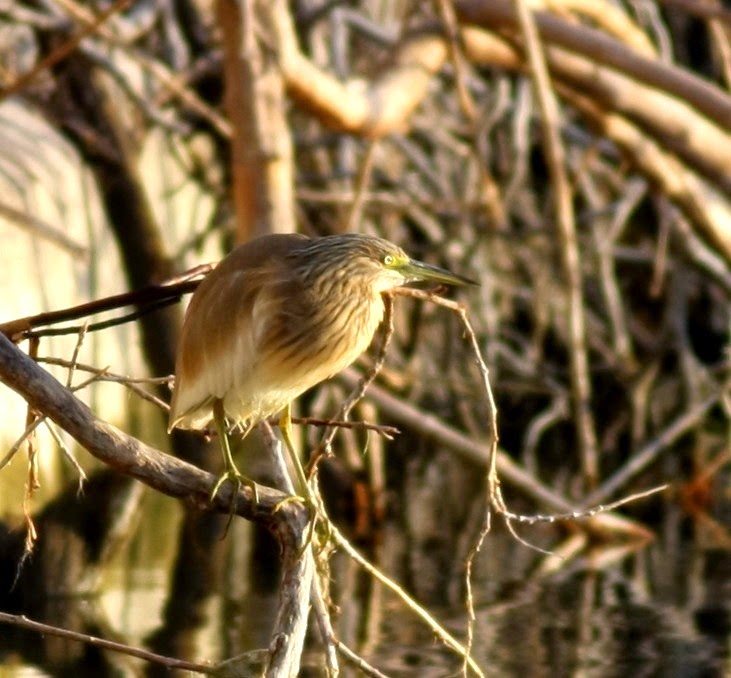 Unfortunately, the pond is bordered by private land, with only one access point located at some distance from the overhanging vegetation where the heron perches. 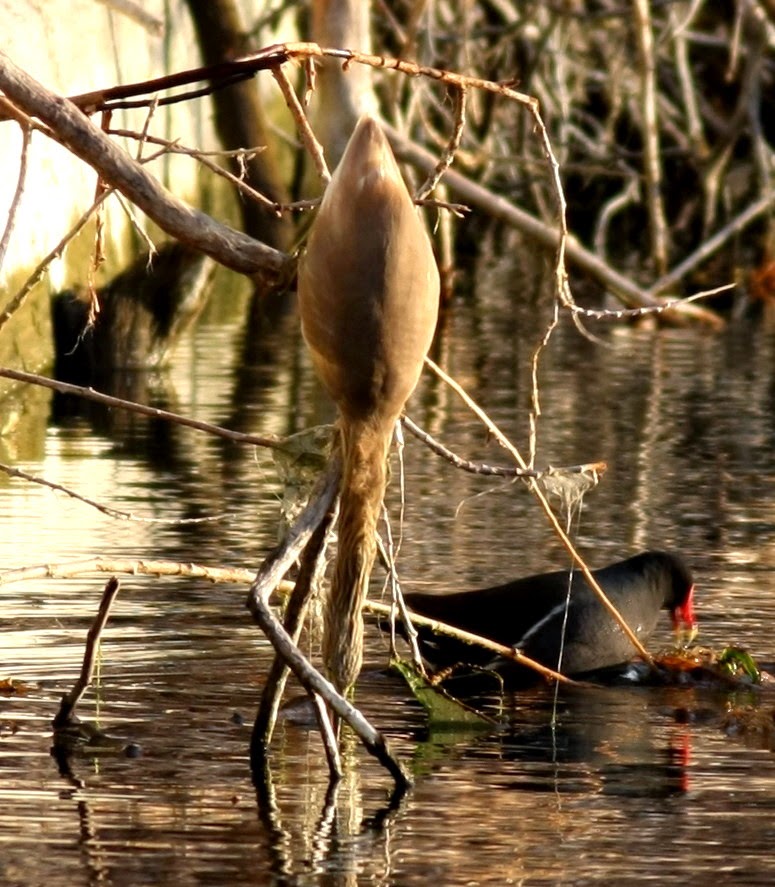 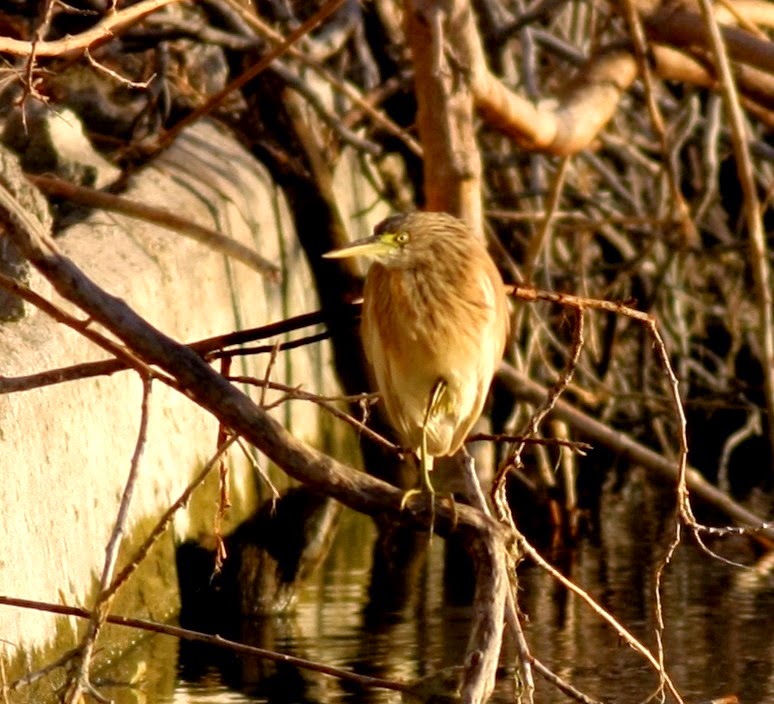 Also seen in the same area on Jan 31 was a solitary Barn Swallow (Hirundo rustica), flying low over the ponds in search of insects. The species is a regular passage migrant to the Canaries, usually in spring. 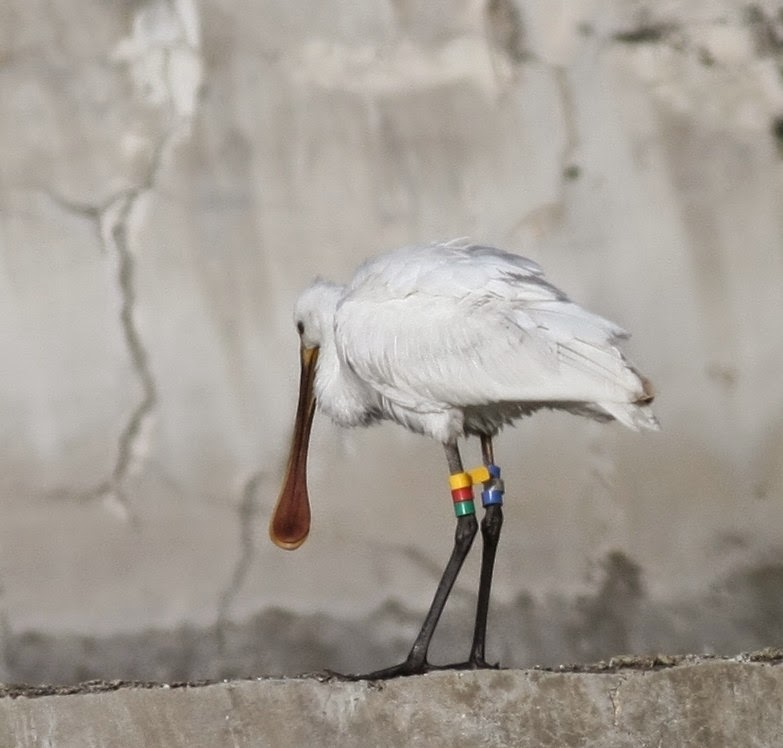 This juvenile Eurasian Spoonbill (Platalea leucorodia) was discovered at an irrigation pond in Tazacorte on Jan 17, and from the colour sequence of the leg bands, is clearly the same bird photographed at the airport pools back in October 2014 by a visiting observer (see recent blog post): just where the bird has been since then is a mystery... 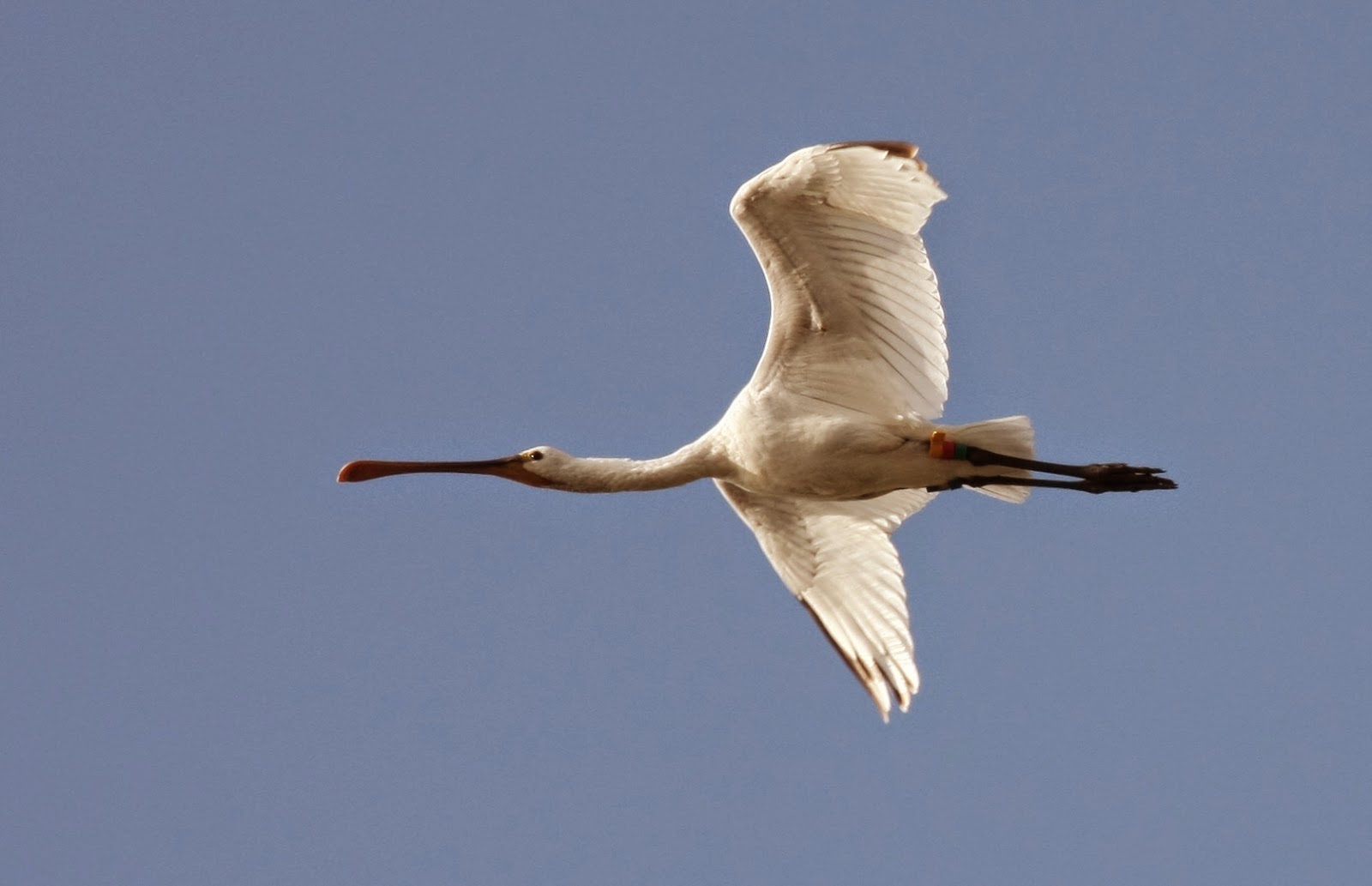 The Spoonbill is a regular winter visitor to the Canaries (all islands), and many of the birds recorded, like this one, come from the Netherlands. The species is said to prefer freshwater reservoirs while on migration within Macaronesia. 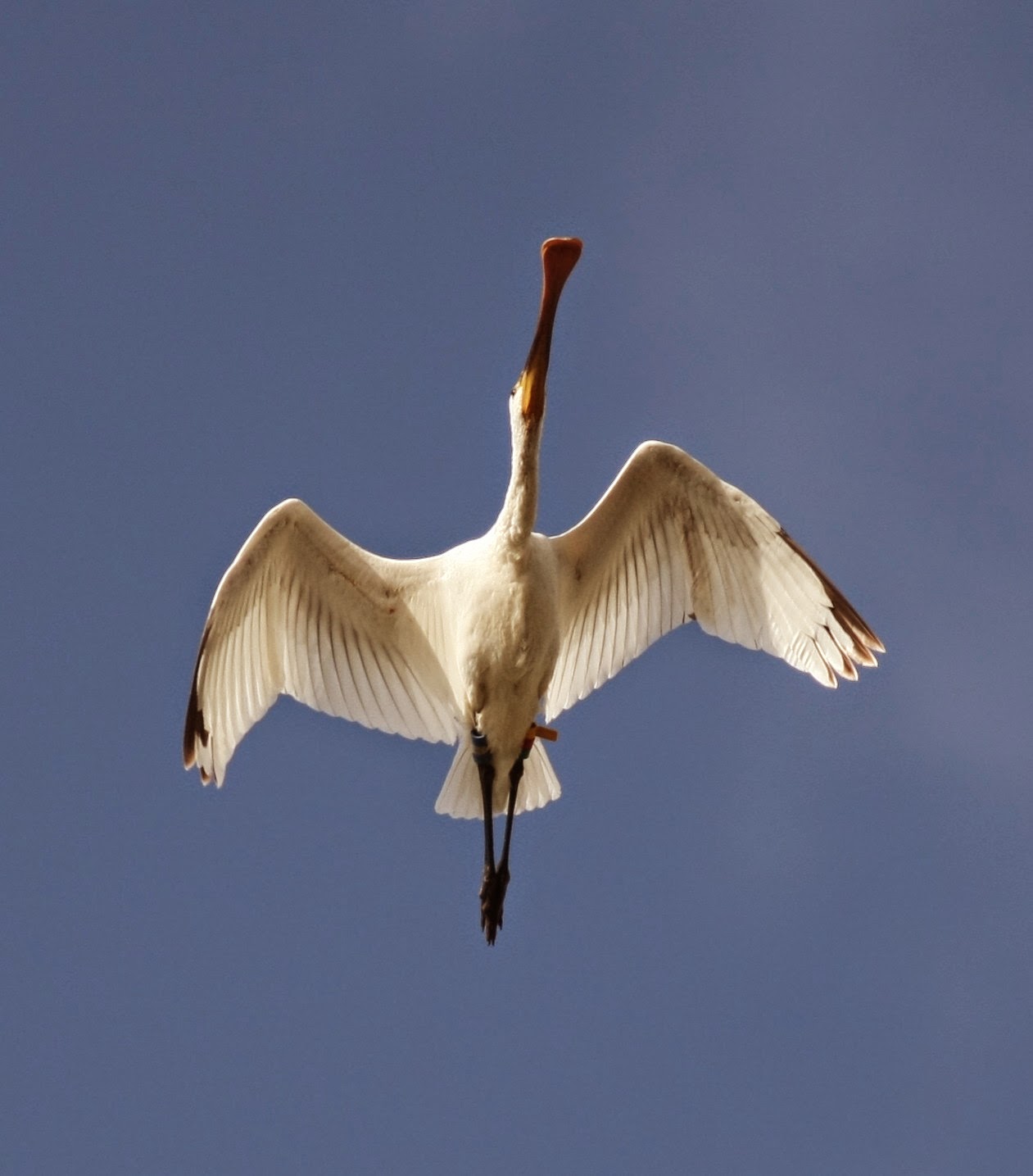 There are certainly plenty of man-made, freshwater ponds on La Palma, but most have high water levels at present and do not provide the kind of habitat usually associated with this mud sifting species.

It is highly likely that this conspicuous bird has been spotted by other people over the past 4 months, especially at irrigation ponds in the banana growing areas on the island. However, to the best of my knowledge, no one else has reported it. 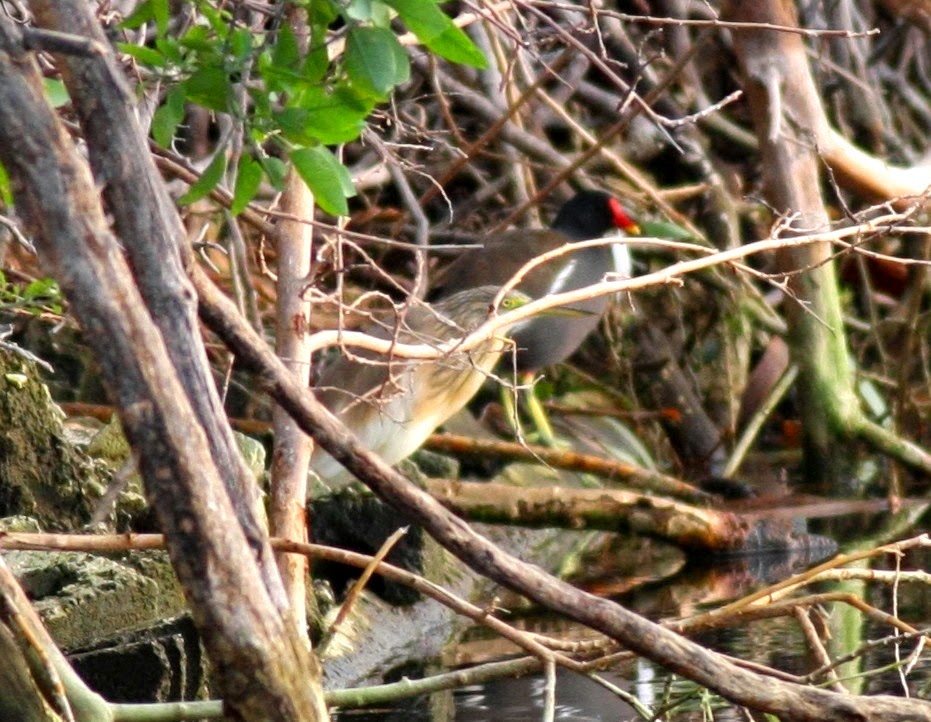 My last sighting of Squacco Heron (Ardeola ralloides) on La Palma was back in May 2012, and in April 2011 two birds were present simultaneously. The species can be regarded as a fairly regular passage migrant to the Canaries, with records from all main islands, except El Hierro.

All my Squacco sightings to date, including the present bird, have been at irrigation ponds in Tazacorte, typical locations at which other migratory Ardeidae also turn up, usually during the first part of the year, rather than in autumn. 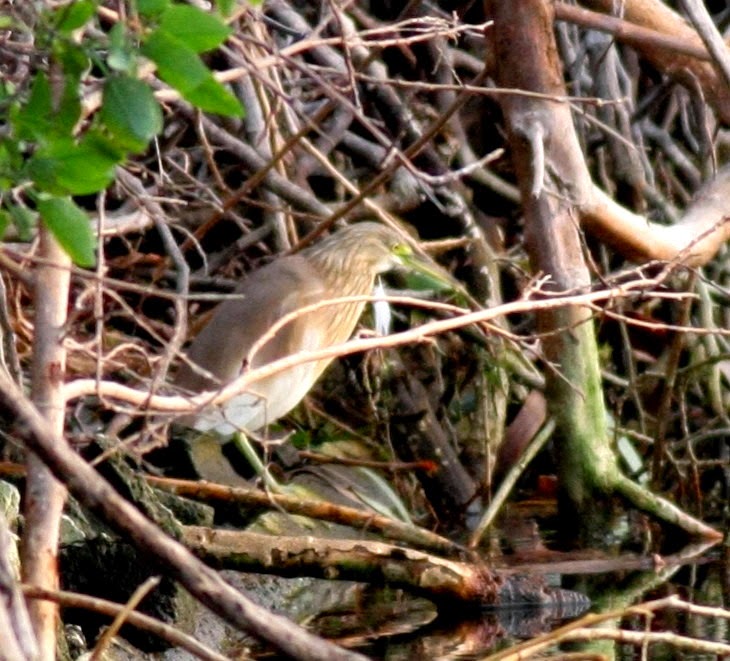 Observing conditions were far from ideal this evening (Jan 13), as the bird was discovered in failing light, some distance away from the only feasible access point, and partly concealed by vegetation. The present images were captured at ISO 800, 1/100 second, and leave a lot to be desired, photographically speaking. At the same location there were about 30 Little Egrets (Egretta garzetta) and two Cattle Egrets (Bubulcus ibis), which were presumably planning to roost in the surrounding bushes. The pond is also home to several Moorhens (Gallinula chloropus), one of which can be seen in the first photo above.

At the irrigation ponds in Las Martelas (Los Llanos de Aridane), a couple of White Wagtails (Motacilla alba) have provided a little interest in what is otherwise a fairly slack period for migrants.


Resident species are not often featured in La Palma Birds, so to redress the balance slightly, below are two shots of a leucistic Blackbird (Turdus merula) encountered in Tijarafe recently. I have seen similar individuals elsewhere on the island, such as in the laurel forest of Los Tilos.

Leucism is by no means a rare occurrence in birds, but can vary in extent from affecting just a few head feathers, as in the present specimen, to producing completely white individuals. Blackbirds seem to be particularly prone to this condition, but always retain their normal, dark eyes, whereas true albinos have red eyes . 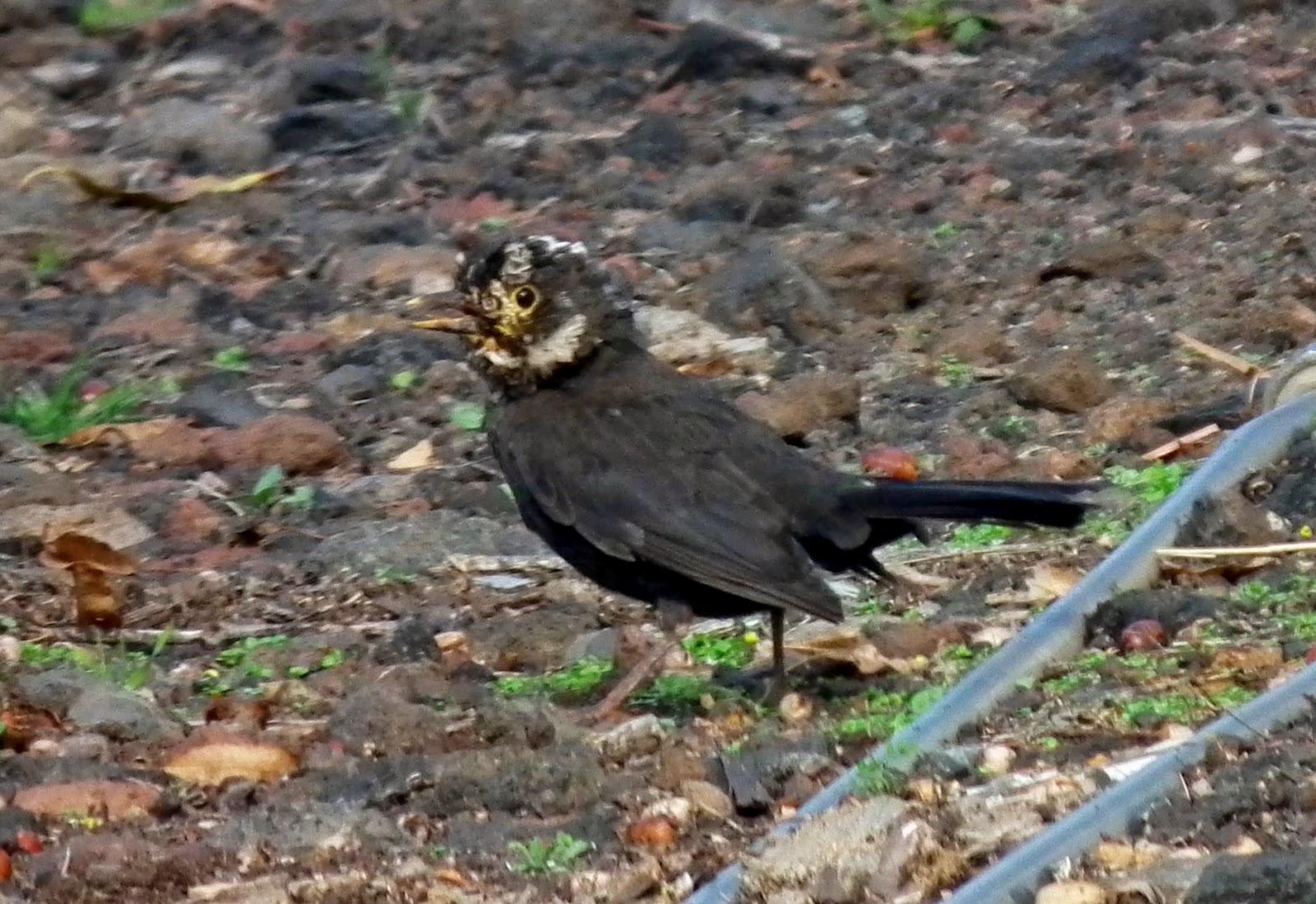 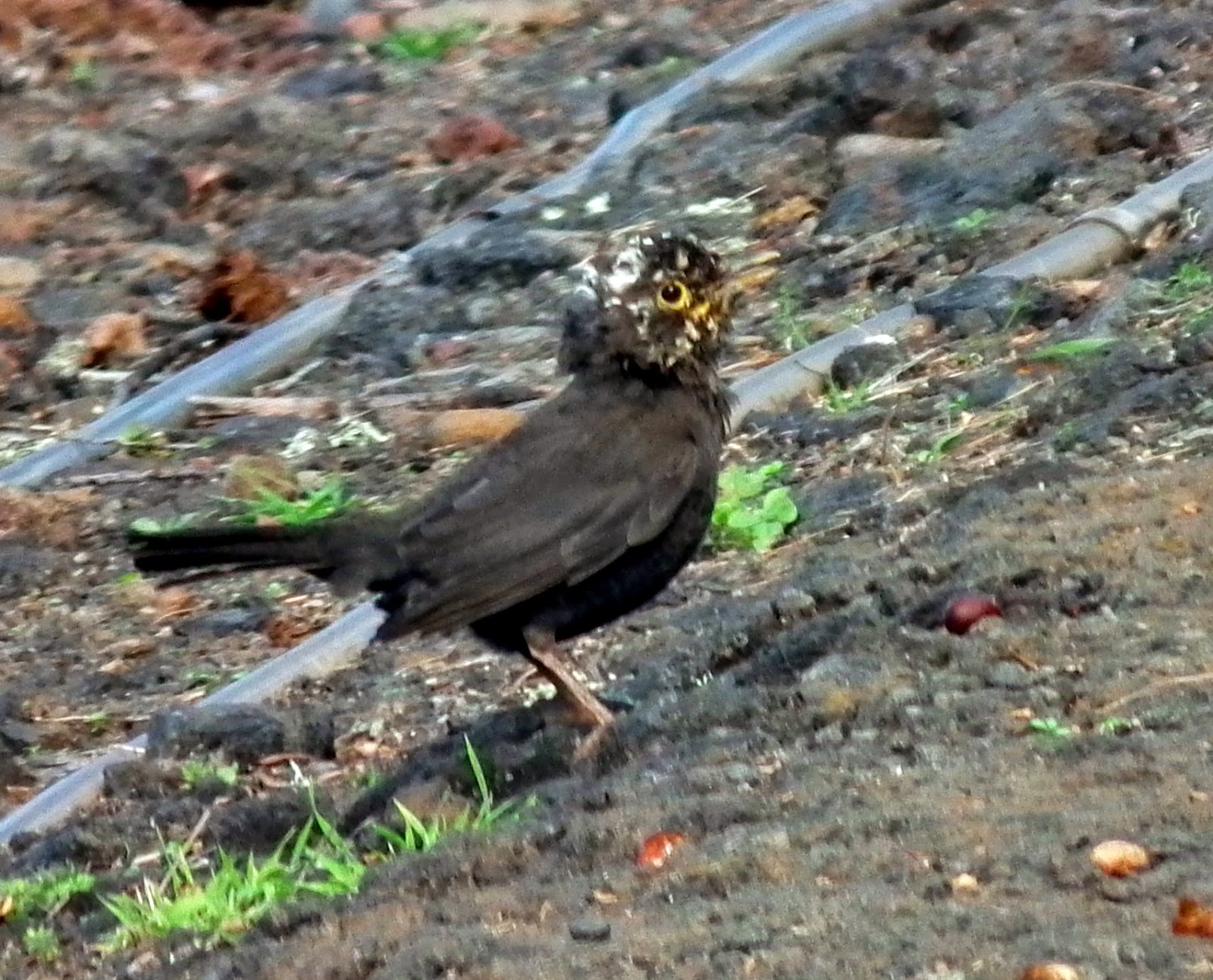 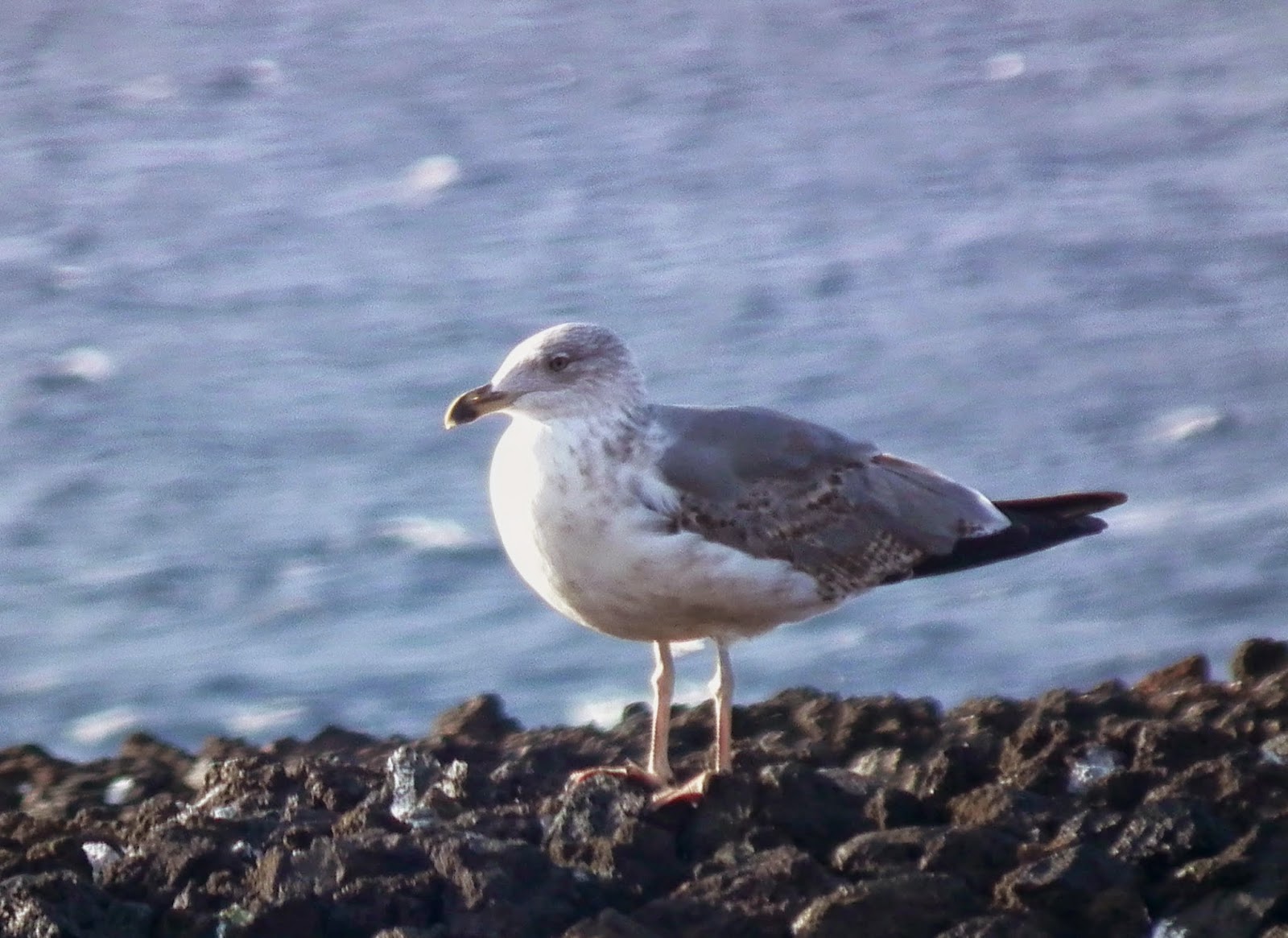 In November and December 2014, a number of interesting migrants were detected on La Palma, although no real "rarities" appeared. A pale morph Booted Eagle (Hieraaetus pennatus) was spotted by a visiting observer (Allen Moore) in the Santa Cruz area on Nov 28, and was also reported a few days later by a local islander (pers. comm.). My own efforts during the same period yielded, amongst other species, up to five Black-headed Gulls (Chroicocephalus ridibundus), one male Eurasian Teal (Anas crecca), two Tufted Ducks (Aythya fuligula), and the juvenile Garganey (Anas querquedula) shown below...all at the irrigation ponds in Las Martelas (Los Llanos de Aridane). Very few wintering Coots (Fulica atra) have arrived on the island this year; the total was only 12 birds at the end of December.

Possibly the highlight of recent weeks was the 3w Herring Gull (Larus argentatus) discovered at Las Salinas in Fuencaliente on Dec 22. This species is classed as a vagrant to the Canary Islands, with previous records from La Palma, Tenerife and Gran Canaria. 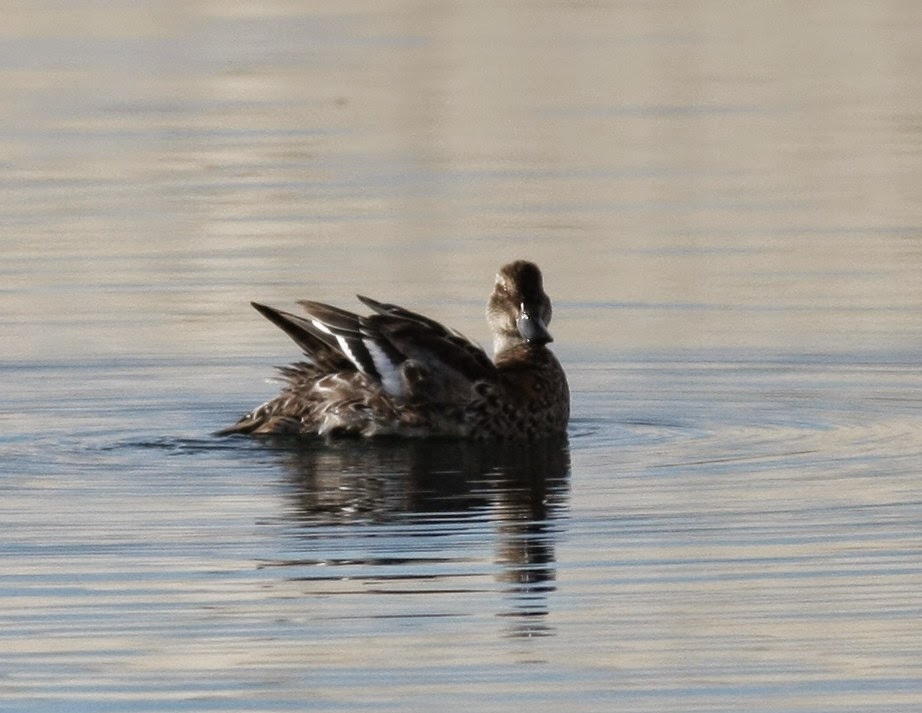 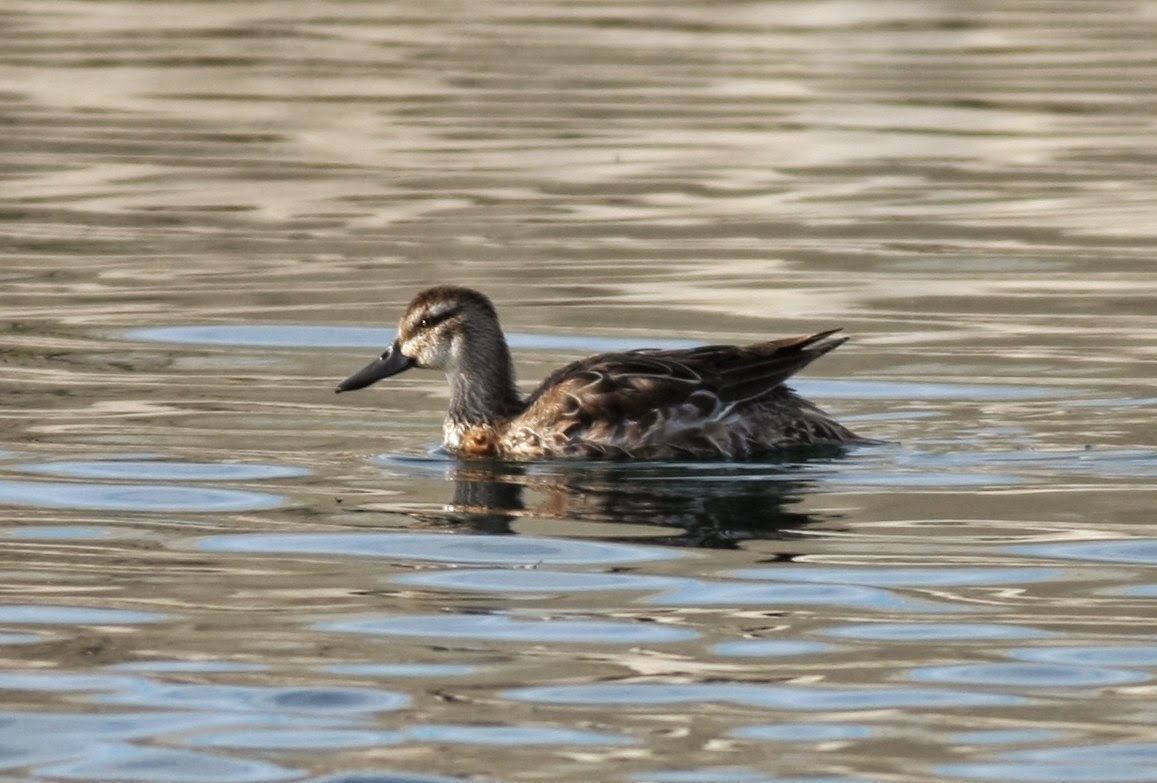 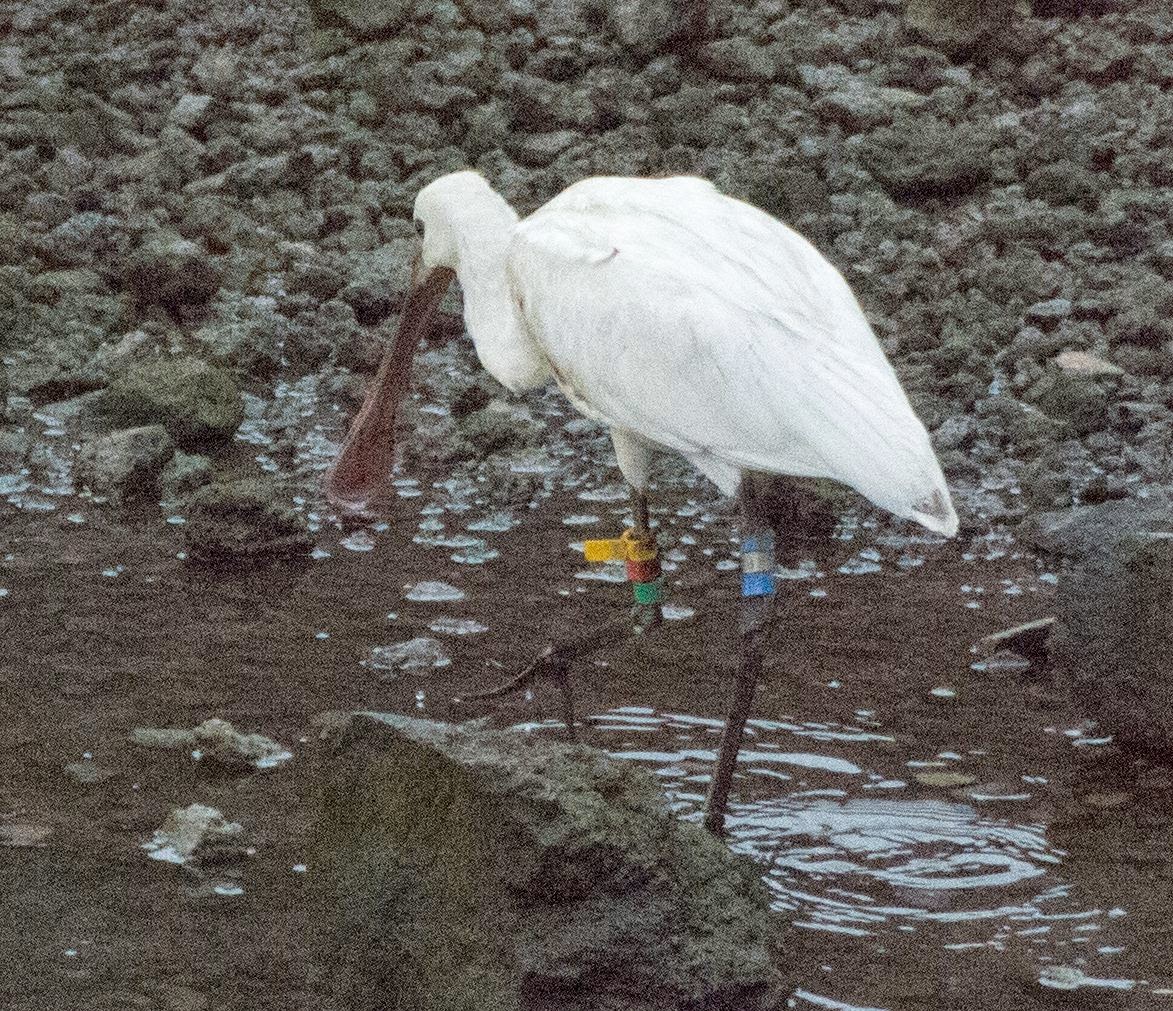 Finally, above is a photo kindly sent to me by a visiting observer (R.C.B.) who photographed this juvenile Eurasian Spoonbill (Platalea leucorodia) at the seawater pools near the island's airport on Oct 5. The coloured tag/ring combination indicates that this bird came all the way from the Netherlands, but the precise banding location remains to be confirmed.
Publicado por Robert Burton en 21:29 No hay comentarios: