Followers of this blog may recall that a census of overwintering Ardeidae was carried out on La Palma at the end of January 2011, and coordinated throughout the country by SEO/Birdlife (see: Annual Ardeidae Census - RESULTS, posted on 26 Jan 2011 for more details). The census method entailed localising communal heron and/or egret roosts and simply counting the number of birds flying in at dusk to spend the night there.
The first of the two main roosts on La Palma was located along coastal cliffs between Puerto de Tazacorte and Tijarafe, on the west coast of the island, and the second in a banana plantation bordering an irrigation pond, in the Tazacorte municipality. At the two roosts, 51 and 52 Little Egrets (Egretta garzetta), plus 5 and 1 Grey Heron (Ardea cinerea) were recorded respectively.
For the January 2012 census, an inspection of the coastal site is pending to see if it is still in use, but the plantation roost in Tazacorte now appears to have shifted to another group of irrigation basins about one kilometre away. On the evening of December 21, I counted 44 Little Egrets and 4 Cattle Egrets (Bubulcus ibis) at this newly-discovered location. The birds start flying in from about 18h onwards, with the peak of activity between 18:30 and 19:00. At this time of the year, from about 19:15 onwards, failing light makes further counting unreliable.
The short video posted above gives an idea of the lively atmosphere as the birds squabble for places on the flimsy, swaying branches of a Nicotiana glauca bush overhanging the pond... (Apologies for the rather poor quality of the film).
Publicado por Robert Burton en 21:00 No hay comentarios: 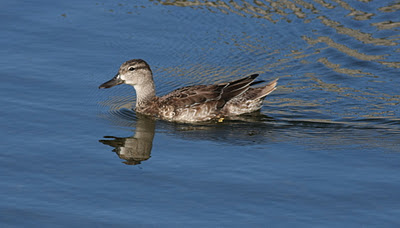 After thorough searching, and repeated visits to the same location in Las Martelas, I was pretty convinced that the duck had left La Palma for good. However, on December 13, the individual shown in the present post turned up at the same spot, and the question immediately arose as to whether this was the the first bird which had returned, or a complete newcomer... 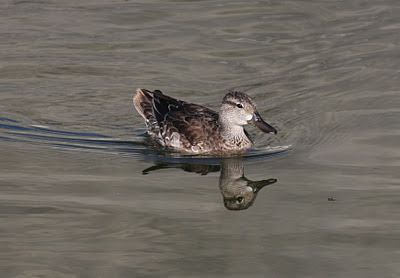 My first impression was that the new bird's plumage appeared to be more contrasting, with a more conspicuous dark stripe behind the eye, and a very obvious pale loral patch, clearly visible in all light conditions. 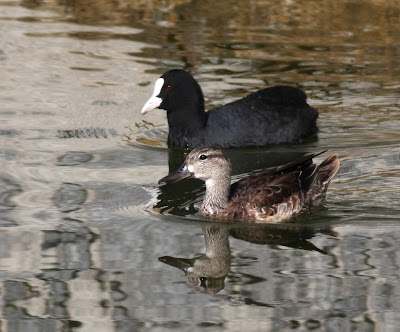 Female Blue-winged Teal together with Coot
In an attempt to settle the doubt, I have been comparing photographs, trying to judge the amount of blue and white on the upper wings, and to assess other relevant plumage details. As regards behaviour, the present bird seems equally at ease within the confines of its man-made pond, dabbling placidly across the surface at a respectful distance from the Coots (Fulica atra), preening itself both in and out of the water, and taking the occasional nap in the middle of the basin.

The following images highlight various aspects of the bird's plumage... 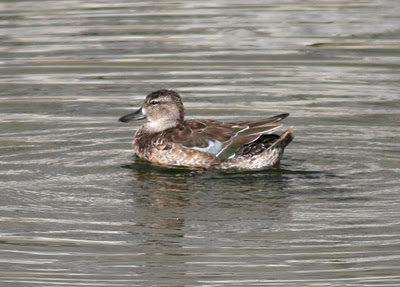 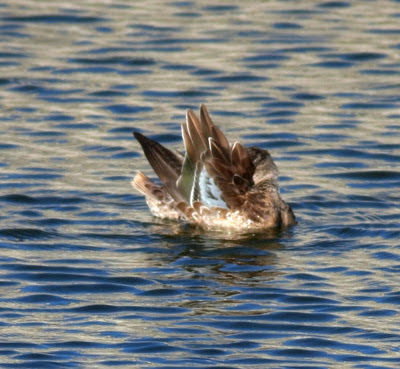 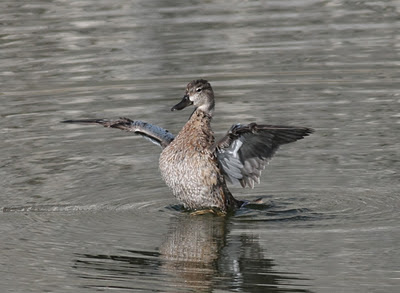 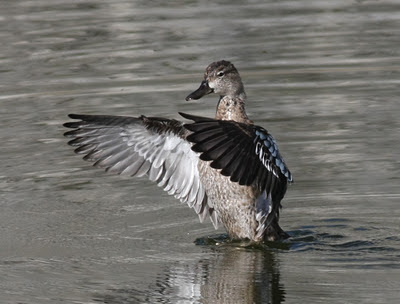 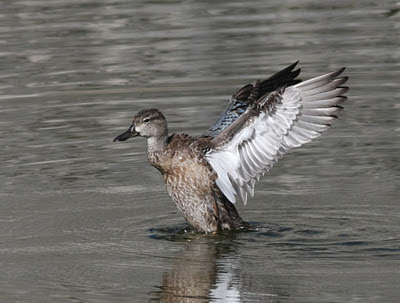 My final verdict, without conclusive photographic evidence to the contrary, is that this is the bird first observed on November 30 - but where it spent the 11 days between December 2 and December 13 remains a mystery...
Publicado por Robert Burton en 19:46 No hay comentarios: 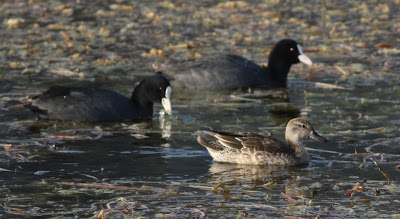 On Nov 30, during a visit to an irrigation pond in Las Martelas, I discovered this rather drab duck among the group of 10 Coots (Fulica atra) currently overwintering at the site... 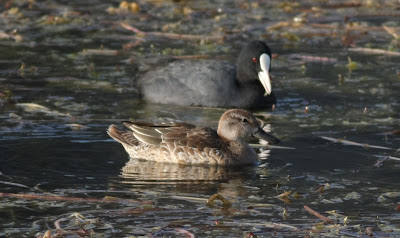 By this time of the year, the first migratory flocks of Teal (Anas crecca) have usually arrived on the island, but this bird, although roughly the same size, was no Eurasian Teal: the unusually long tail, and uniform grey bill were conspicuous differences, but the overall drabness made identification difficult...a Garganey (Anas querquedula) perhaps? 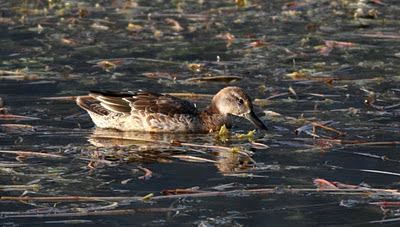 No helpful speculum or wing-bars were visible as the duck placidly dabbled around the pond, but the thin eye-ring and pale loral patch were useful clues...

Finally, after a brief session of preening, a small, turquoise blue patch came into view on the bird's flanks: a female, or juvenile Blue-winged Teal! 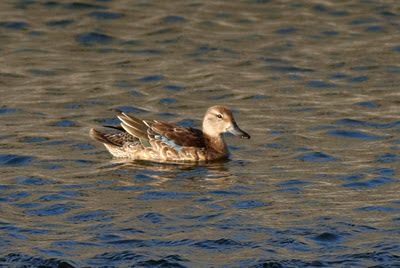 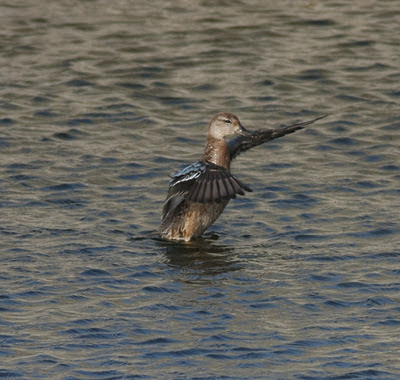 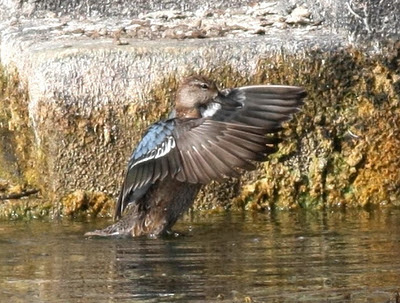 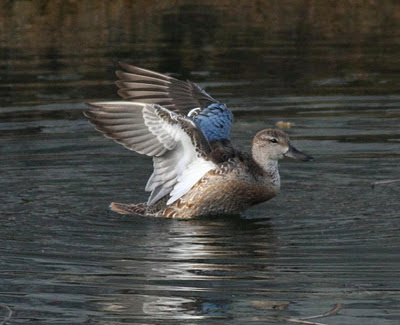 Blue-winged Teal (Anas discors)
Not the best pictures of this unexpected American visitor perhaps, but strong, gusty winds make photography difficult on the west side of the island at the moment.

The Blue-winged Teal is widespread in North America, from Alaska to Newfoundland, and in the centre of the United States. As with the European Garganey, it is more migratory than other Anatidae. Wintering grounds extend along the southern coasts, from California and North Carolina, throughout the Caribbean, Central America, and a large part of South America, where some individuals occasionally reach northern Chile and Argentina. The predominance of spring sightings in Europe, together with other evidence, suggests that many birds spend the winter in Africa, and only pass through Europe on migration, with their spring routes being more easterly than their autumnal ones (Eduardo de Juana, Aves Raras de España, Lynx, 2006).

Up to 2003, there had been 32 records of this species in Spain, 5 of them on the Canaries. It is interesting to note that, of the 5 Canary Island sightings, 4 were in winter (December-February). Consequently, de Juana postulates that "perhaps the islands are located only a short distance from the areas in Africa where most of the Blue-winged Teal visiting the Old World spend the winter".

More recent figures for this species are included in the SEO Rarities List of 2006: 35 records, 39 birds, nationwide.

This sighting will be submitted to the Spanish Rarities Committee in due course.
Publicado por Robert Burton en 19:25 No hay comentarios: