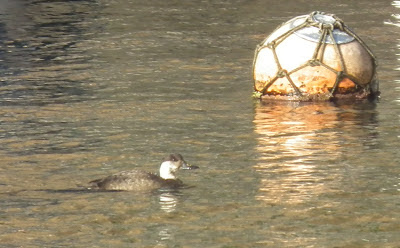 There was a short-lived storm on October 18, and while driving through the harbour of Santa Cruz de La Palma in the late afternoon, I spotted two ducks resting close to the pontoons in the marina. They could easily have been mistaken for abandoned mooring buoys. Unfortunately, I had neither binoculars nor a camera with me at the time, but was able to get close enough to identify the birds as Common Scoters (Melanitta nigra), probably immature females. 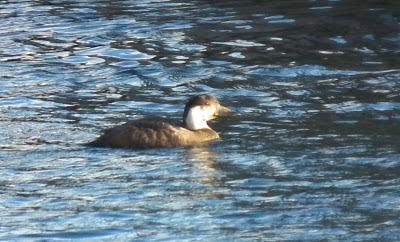 Using the camera of my mobile phone for the first time, I took a few pictures of very poor quality: all the images shown in the present post were taken with a Fuji HS10 this morning, Oct 19, when only one of the two birds could be located. 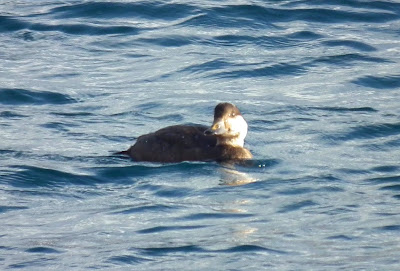 Referred to as the Black Scoter in the Field Guide to the Birds of Macaronesia (García-del-Rey, E., Lynx 2011), the species is classed as a vagrant to the Canary Islands, with records from Tenerife, Gran Canaria, and Lanzarote. Tony Clarke, in Birds of the Atlantic Islands (Helm, 2006), gives more details: "accidental visitor, but with only three recent records. On Lanzarote, two, Arrecife, Jan 1993, and one there, Jan 1994, and an exhausted immature, El Médano (Tenerife), 13 Dec 1998. Also recorded on Gran Canaria but not within the last 100 years". 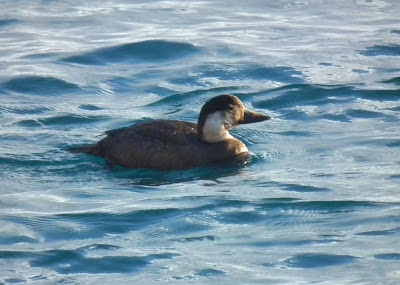 Luckily, I got to Santa Cruz just as the last duck was making its way seawards. Before leaving the protected waters of the harbour, it made a short detour into the fishing-boat area, where I saw it dive a few times and pick crabs off the rocks. It then continued paddling south, parallel to the Bajamar beach, less than 50 metres off-shore.

A group of women bathers seemed disconcerted by its arrival...

... and were obviously relieved when the duck decided to ignore them.

For an interesting summary of documented appearances of the  Common Scoter in the Canary Islands (in Spanish), including details of recent records from Madeira, see the SEO/Birdlife blog here

This sighting will be submitted to the Spanish Rarities Committee in due course. 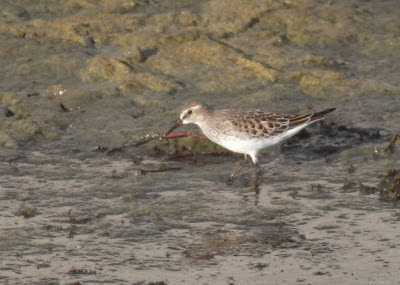 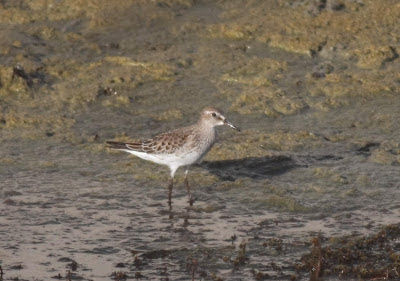 I was able to get a few passable photos on that occasion, but all the images shown here were captured the following morning, Oct13, at the same pond. Of the accompanying waders, only the Curlew Sandpiper was still present. 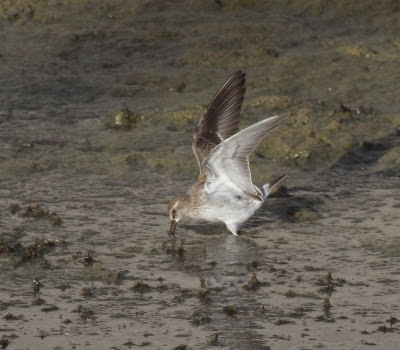 What first attracted my attention to this Transatlantic vagrant was its elongated outline and long primary projection. The bill was the right shape and length for fuscicollis, but the appropriate brownish patch at the base of the lower mandible was not very evident. Identification was finally clinched (and Baird's Sandpiper discounted) when the bird obligingly did some wing-raising, thus providing a few glimpses of its upper tail coverts: the rump was very clearly white in colour, as can be appreciated in three of the present photos. 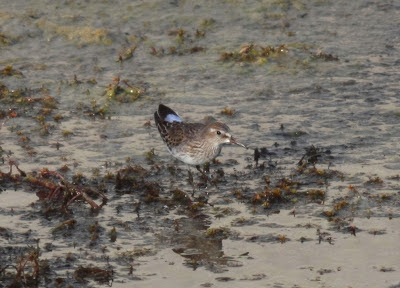 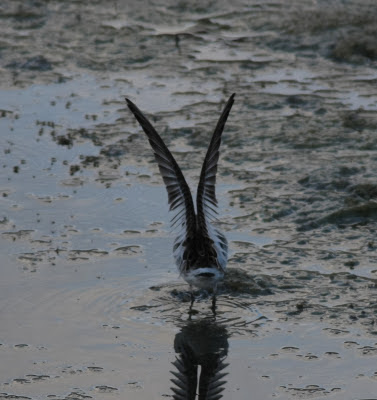 For comparison, the last four frames include the Curlew Sandpiper (Calidris ferruginea): 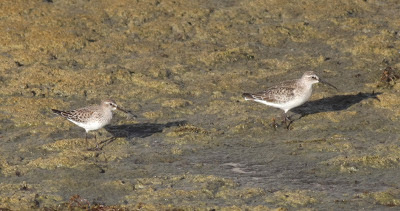 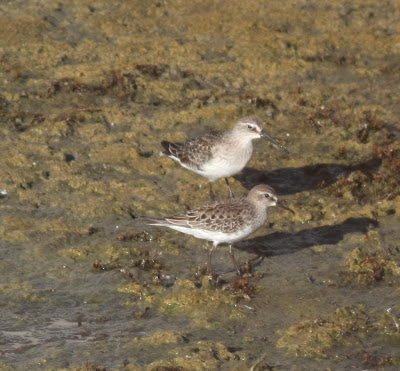 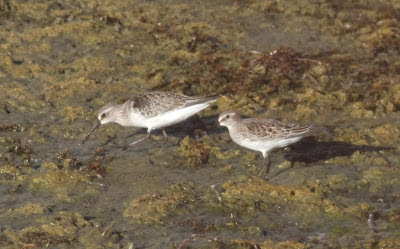 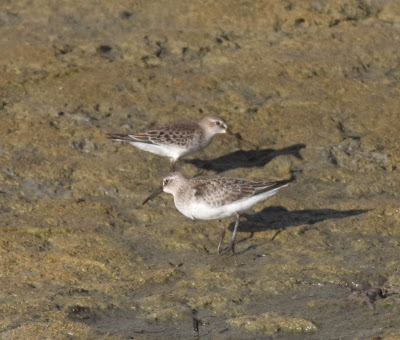 The White-rumped Sandpiper has been recorded on all the Canary Islands, and this is my second on La Palma: the first was discovered at the saltpans in Fuencaliente on Oct 21 2010. (See Oct 22 2010 post).

Details of the present sighting will be submitted to the Spanish Rarities Committee in due course.
Publicado por Robert Burton en 16:48 No hay comentarios: 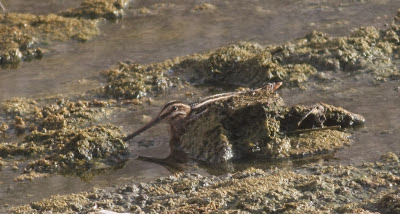 Although these images of a Common Snipe (Gallinago gallinago) have been drastically cropped, they are still quite effective, I think. They illustrate how well migratory birds are able to adapt to the far-from-ideal habitat in Las Martelas, an area of manmade ponds on the outskirts of Los Llanos de Aridane. 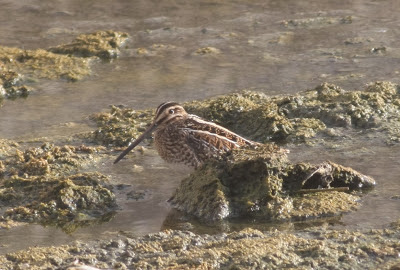 This species is a regular passage migrant to the island, and often turns up in small numbers at irrigation tanks like the one shown here. However, due to ongoing drought, very few of the ponds have the necessary layer of mud or soft sand in the bottom - in fact, many are completely dry at the moment. 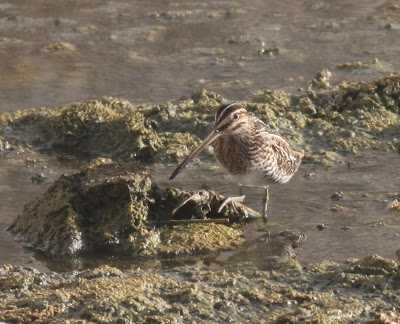 Somehow, this solitary specimen manages to feed in the shallow pool of stagnant water in the bottom of an almost empty tank, where a Greenshank (Tringa totanus) and a Curlew Sandpiper (Calidris ferruginea) were also foraging. 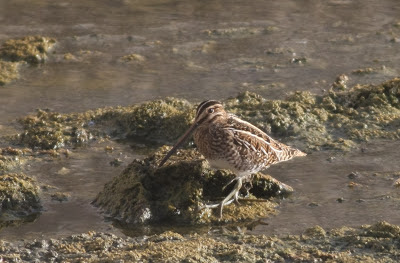 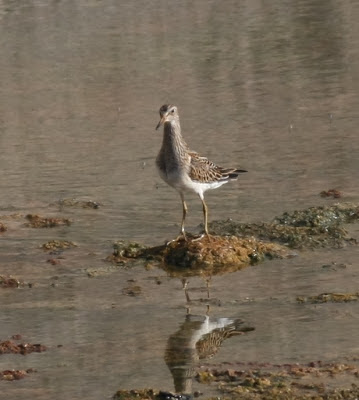 The Pectoral Sandpiper (Calidris melanotos) shown here is a Transatlantic vagrant with records from all the main Canary Islands except La Gomera (Fieldguide to the Birds of Macaronesia, García-del-Rey, E., Lynx 2011). This bird, first detected on the evening of Oct 9, is my eighth sighting of this species on La Palma. 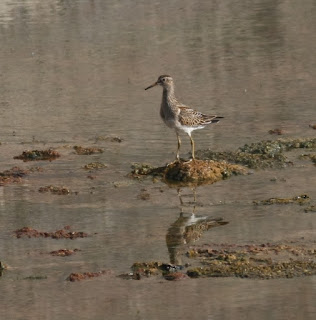 Several key identification features can be seen in the present images, including the abruptly ending neck streaks, which clearly contrast with the white underparts. 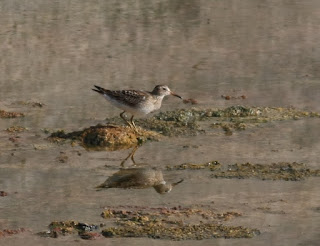 The leg colour and bill characteristics are also diagnostic. This sighting will be submitted to the Spanish Rarities Committee in due course.
Publicado por Robert Burton en 21:54 No hay comentarios: