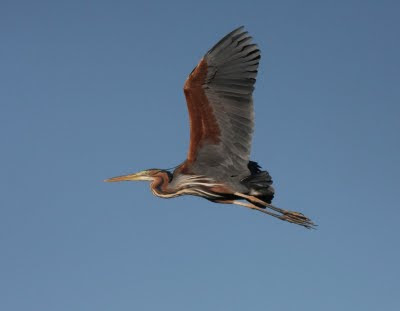 First glimpsed at a distance on April 16, identification remained uncertain until better views a day later settled the doubt. This is my first sighting of Purple Heron ( Ardea purpurea) on La Palma, although the species is a "regular but scarce passage migrant, especially in spring, recorded from all main islands except El Hierro" (Birds of the Atlantic Islands, T. Clarke 2006).
There are presently at least two birds around the irrigation basins in Las Martelas and adjacent areas, while on the island of Tenerife, two groups of 7 and 4 individuals have been sighted this month - exceptional for a species which normally appears in ones and twos. See the SEO blog avescanarias.blogspot.com for more details. 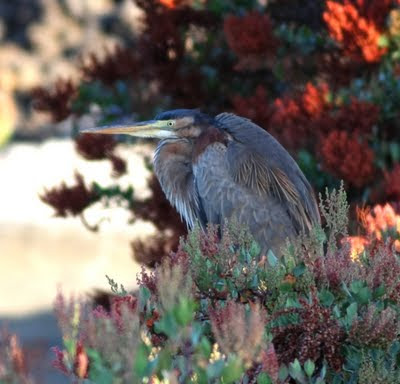 The photo above was taken early in the morning, after waiting under a camouflage net for first light. At about 7:20, the bird glided in from out of nowhere and landed on the shady side of the pond, remaining almost motionless and partly hidden for about one hour, making no attempt to forage.

Getting the first images meant setting the ISO speed at 1600, shutter 1/6 second, f.5.6. After its initial inactivity, the heron finally flew over to the sunnier side of the basin, and, had it not been for the untimely appearance of a man who flushed the bird when he came to measure the water level, I might have got some more satisfactory, better-lit shots... 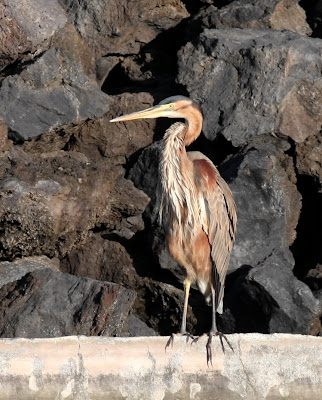 The Squacco Heron (Ardeola ralloides) is a fairly regular visitor to the island, and is tolerant of stealthy approach. It seems to feed well while here, taking frogs, tadpoles, dragonfly larvae, and possibly the occasional small fish, hunting either by wading or from a perch. Two individuals are present at the time of writing, in various irrigation basins in Tazacorte. 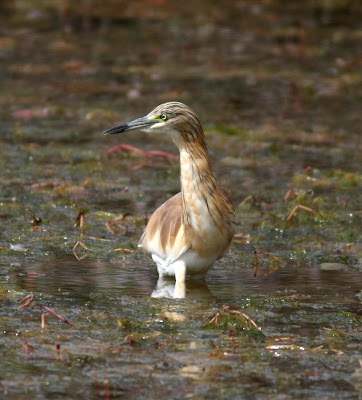 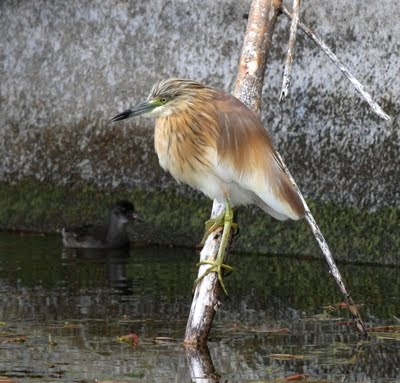 Squacco Heron: on the left, slightly out of focus, one of the 3 surviving Moorhen (Gallinula chloropus) chicks from an early February brood

Finally, the Night Heron (Nycticorax nycticorax) mentioned in my last post, has been seen on a number of occasions in Tazacorte and Las Martelas, both on the ground, and in flight. 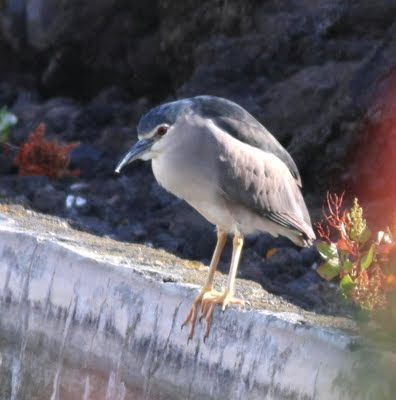 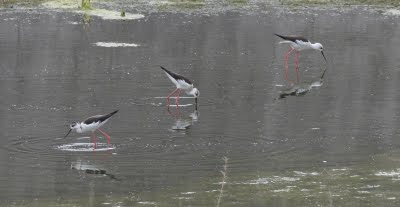 After a longish spell with little migratory activity, the above group of three Black-winged Stilt (Himantopus himantopus) photographed in Las Martelas on April 15 came as a pleasant surprise!

A small colony of this species established itself on Lanzarote in the 1990s, and the bird has also bred sporadically on Fuerteventura, Gran Canaria and, more recently, on Tenerife (Atlas de las Aves Nidificantes en el Archipiélago Canario, Ed. J.A.Lorenzo, 2007). On the remaining islands it is probably an uncommon but regular passage migrant (Birds of the Atlantic Islands, T. Clarke 2006).

The following record for La Palma was published in Ardeola 42/2 1995: 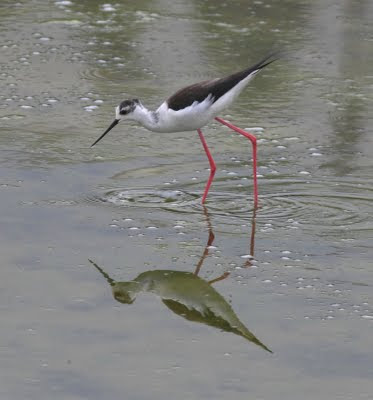 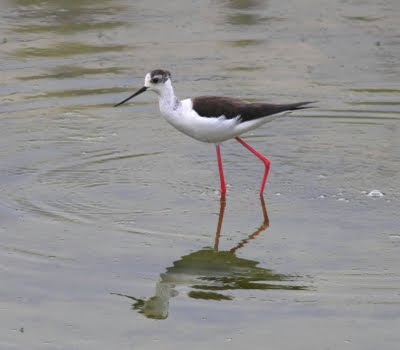 The Night Heron (Nycticorax nycticorax) shown below was discovered in an irrigation basin in Tazacorte on the evening of April 16: the handheld shot was captured in poor light conditions, with ISO set at 1600, 1/250 second, with a 400mm lense without image stabilisation.

This species has bred recently on Tenerife, and possibly occasionally on Gran Canaria, and there are records of birds on passage from all the islands. In the case of La Palma, a sighting was published in Ardeola Vol. 55/2 2008 of an individual seen by I. Brito in Las Martelas on Sep 28-29 2000. 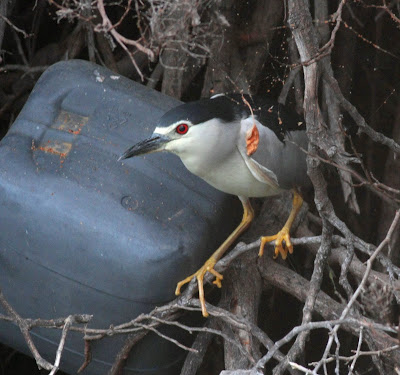 The Squacco Heron (Ardeola ralloides) has been recorded regularly on La Palma in recent years, mainly around irrigation basins in Tazacorte, where the bird below was located on April 15. 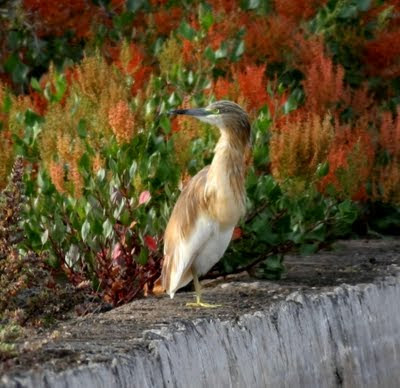 The following Wood Sandpiper (Tringa glareola) has been seen in various irrigation basins in Las Martelas since April 7. This individual appears to have exceptionally long tibia... 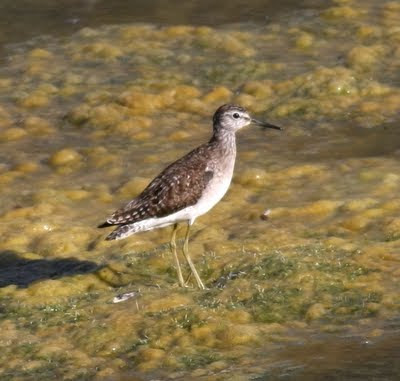 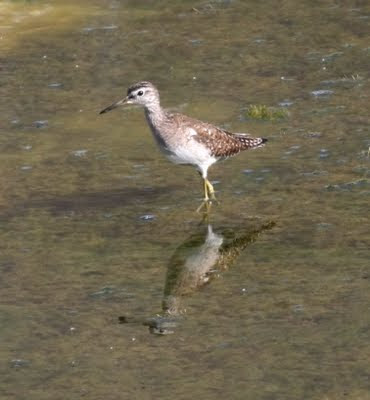 Over the last few days, apart from the above species, there have been up to 6 Little Ringed Plover (Charadrius dubius) in Las Martelas, a Redshank (Tringa totanus) at the seawater pools near the airport, and a possible sighting of a Purple Heron (Ardea purpurea), also in Las Martelas but pending confirmation and photo.
Publicado por Robert Burton en 23:30 No hay comentarios: 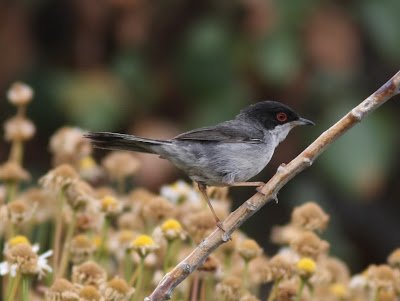 Very common in forest or scrub, especially at low to medium altitude, the noisy rattle-like call of the Sardinian Warbler (Sylvia melanocephala) is unmistakable, and is emitted during foraging and when perched.

Interestingly, the natural habitat of Canary Island warblers in the past was probably the thermophilous forest, located between the coastal and montane zones, a kind of Mediterranean dry woodland in which wild olive trees, palms, dragon trees, juniper, buckthorn and various other trees and bushes once grew. As these areas were cleared to create farmland, or generally became degraded, warblers were able to expand their range both above and below their original habitat (Atlas de las Aves Nidificantes, Ed. J.A. Lorenzo, 2007).

The photos in this post were all taken in coastal scrubland, on a dull windy day with fairly poor light. Both the male and the female were foraging energetically, in order to deliver food to a nest hidden in a thicket of Rumex lunaria (Tree Sorrel). 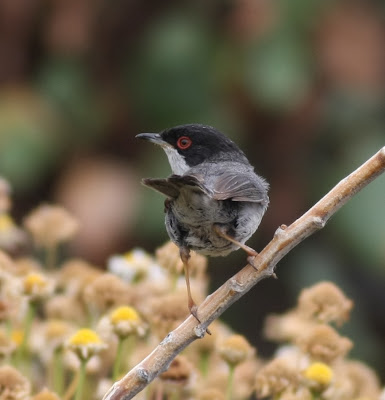 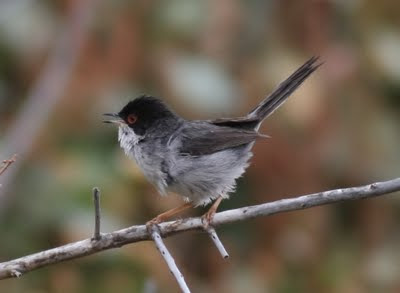 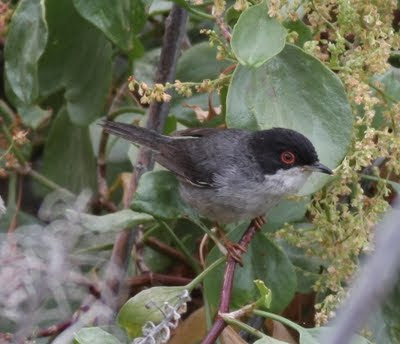