Identification of the "Mystery Bird" shown in the previous post was confirmed by the next three pictures received today. The barring on the pale breast is clearly visible, as are the tail bands.
My thanks to the photographer Roger Ligter for permission to publish these excellent shots of a magnificent raptor. 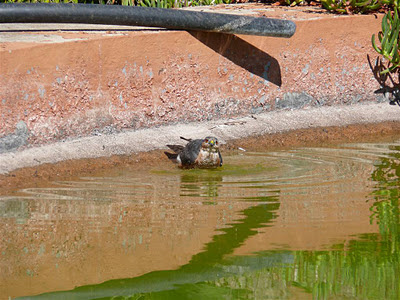 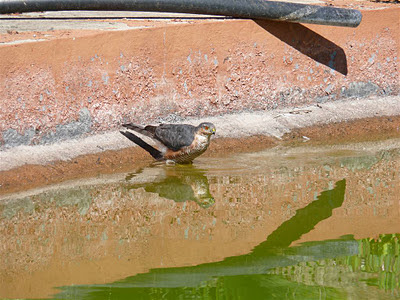 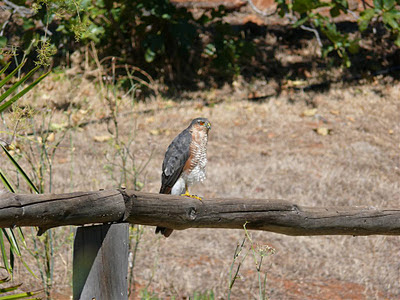 Sparrowhawk (Accipiter nisus)
The Sparrowhawk (Accipiter nisus) is described in the Atlas de las aves nidificantes en el archipiélago canario (Ed. J. A. Lorenzo, Madrid, 2007) as follows:
"...widely distributed on La Palma in all types of forested areas, from the far north of the island to the vicinity of Fuencaliente in the south.  Although absent from drier zones, urban environments or farmland, it is often seen when hunting there..."
Despite being a widespread species , one rarely gets the chance to witness bathing scenes, such as those shown in the present post!
Readers of this blog are invited to send news of interesting sightings on the island of La Palma to the author at: grajaland@gmail.com
Publicado por Robert Burton en 17:24 No hay comentarios:

On Nov 9 I was sent these two photographs of a bird of prey, taken at a small water tank in a garden in El Paso:

The author of the pictures (Roger Ligter) requested help with  identification of the species. I was surprised by the amount of pink on the bird's plumage, and a better view of the breast would have been helpful. My final verdict, after seeking a second opinion from an experienced local birder, is that the mystery raptor is an adult Sparrowhawk (Accipiter nisus).
Publicado por Robert Burton en 8:19 No hay comentarios: