Seabirds and seawatching on La Palma


I am often asked by birders planning a visit to La Palma about the sea-watching potential of the island. La Palma is, after all, surrounded by a vast expanse of unpolluted ocean, so the question seems reasonable.

However, not all regions of the Earth’s oceans are equally rich in marine life, and the subtropical waters around La Palma are referred to as oligotrophic.

So seabird activity and species numbers are generally low. La Palma has no insular shelf or extensive shallow waters offshore, no reefs, no nearby seamounts, no upwelling or nutrient-rich currents, and no estuaries which could act as feeding grounds for coastal birds. The Atlantic plunges to depths of 3,000-4,000 metres within a short distance of the coast. The narrow beaches are made of inorganic volcanic sand and lack food for waders.

So not a very bright picture for sea and shorebird enthusiasts.  Precise details of the observable species and their status can be found in “Birds of the Atlantic Islands” by Tony Clarke or the “Field Guide to the Birds of Macaronesia” by Eduardo García-del-Rey. (The Avibase checklist should be handled with great care, by the way).

Here is a basic overview of what to expect:

There is only one species of breeding gull, the Yellow-legged (Larus michahellis), and small numbers of Lesser Black-backed (L. fuscus) can also be found. Very occasionally, migratory gulls turn up, such as the solitary Iceland Gull (L. glaucoides), seen by various observers on the island earlier this year.

There are large breeding colonies of Cory’s Shearwater (Calonectris borealis) which are absent from the island between November and February-March. Small numbers of Little/BaroloShearwater (Puffinus baroli) and Manx Shearwater (P. puffinus), might be seen from the coast by patient observers.

The Gannet (Morus bassanus) is a fairly regular visiting bird, in extremely small numbers, and there have been about three sightings of Great Cormorant (Phalacrocorax carbo) on La Palma in the last ten years, including this recent one seen just north of Santa Cruz de La Palma on April 13, and kindly reported by the visiting observers Simon Priestnall and Anthony Cooper, the author of the photograph: 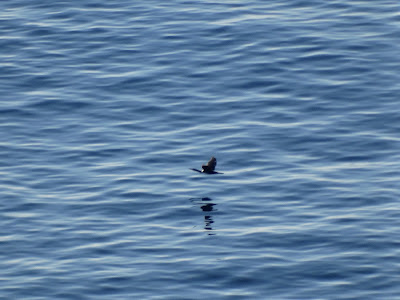 Of course, the fact that hardly anyone is observing birds on the island means that many species are simply overlooked. I also have to admit that, personally, I do more inland birding than coastal. Nevertheless, it would be reasonable not to set your hopes too high, if sea-watching is a priority…

Possible locations to observe seabirds on La Palma include the harbours of Santa Cruz and Tazacorte, Punta Cumplida in Barlovento (northeast) and El Faro in Fuencaliente (south). The latter location has the advantage of an excellent bar-cafeteria, with a wind-sheltered upstairs terrace from where you can survey the ocean in comfort: remember, the birding is going to be very slow.

You might also like to try your luck from Los Cancajos, a resort on the east coast where many foreign visitors stay.

So, no raucous colonies of Guillemot (Uria aalge), Razorbill (Alca torda) or Kittiwake (Rissa tridactyla) - to mention three of the seabirds Northern European visitors might mistakenly expect to find on an Atlantic island - but La Palma does have a couple of offshore stacks where Common Tern (Sterna hirundo) breed annually. Below, are some recent photos taken at one of the tern colonies: 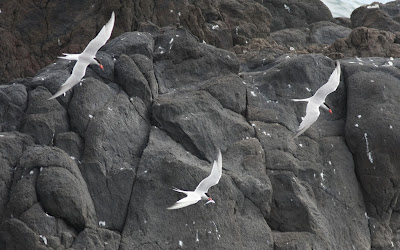 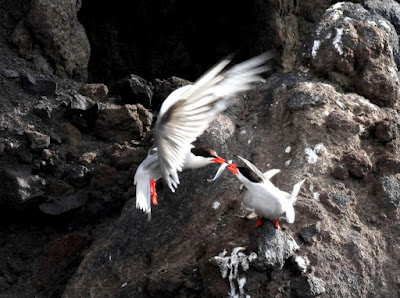 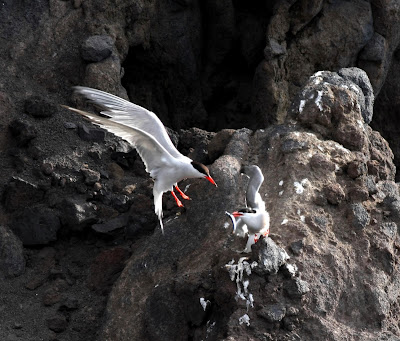 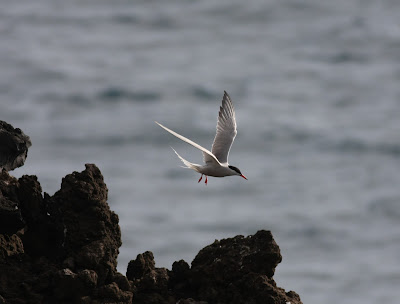 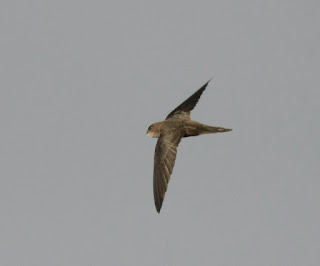 The widespread resident swift on most of the Canary Islands is the Plain Swift (Apus unicolor), although it is suspected that part of the population departs for Africa in winter. The islands of Tenerife, Gran Canaria, Lanzarote, Fuerteventura and El Hierro additionally have breeding populations of Pallid Swift (Apus pallidus), which seem to be restricted to certain parts of those islands.

In the case of La Palma, any swift species seen on the island, other than the Plain Swift (A. unicolor), can be assumed to be a migrant, until further information is available. 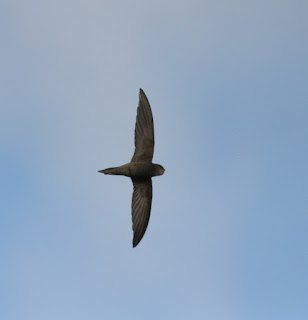 Followers of this blog might recall my previous sightings of Alpine Swift (Tachymarptis melba) on the island...no identification problems with that bird!

However, I find many other swifts difficult. There are records of Common Swifts (Apus apus) for all the Canary Islands, including La Palma, but in most cases these passage migrants probably go unnoticed. To be honest, I have made little effort to find them. 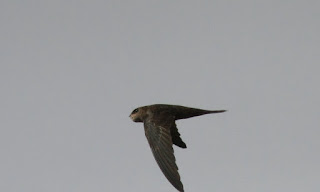 The Pallid Swift (Apus pallidus) is a different story, and I have been on the lookout for this bird on La Palma in recent years: it is classed as a summer visitor to all the Canaries, and even breeds on some of the islands, as mentioned above. So why no evidence on La Palma?

Despite being a little early in the year for a "summer visitor", I am pretty convinced that the three images in this post show Pallid Swifts, or at least the discernible fieldmarks seem to point in that direction: white throat patch, contrast in colour between the outer primaries and the rest of the wing, larger size compared to Plain Swift and less fluttering flight-action, pale, scaly appearance of plumage, bulky body, etc.

Could this be the Pallid Swift - at last?

Second opinions would be most welcome.

1. Second opinions from two knowledgable Canary Island observers, who are both familiar with the breeding colony of Pallid Swifts on Tenerife, have informed me that, in their opinion, the above images do not show Pallid Swifts (A. pallidus), but possibly Common Swifts (A. apus).

So, I will accept their verdict and keep searching!

2. I have even received a second opinion from a Swedish bird illustrator, who is considered an authority on swifts in Northern Europe. He also says my birds are not Pallid Swifts (A. pallidus), and actually thinks they could be Plain Swifts (A. unicolor).