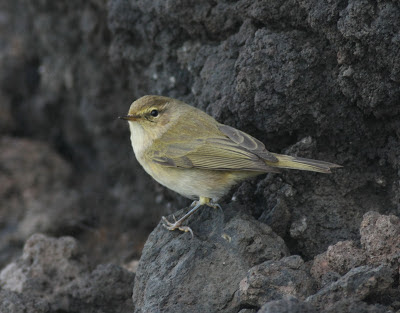 During a birding session at the saltpans in Fuencaliente, on the evening of December 19, I was surprised to spot the bird shown in the present post. The most ubiquitous and abundant passerine on La Palma is the endemic Canary Islands Chiffchaff (Phylloscopus canariensis). But what struck me about the individual shown here was its much greener, more contrasting plumage, its lack of buff tones on the flanks....and the fact that it was found at a location where I had never seen a single Chiffchaff previously, despite frequent visits to the site. 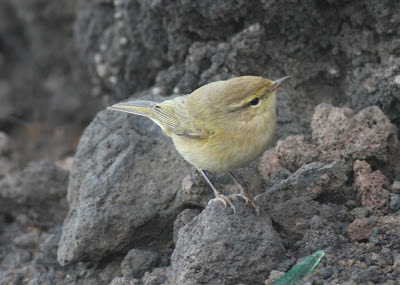 The bird was first observed foraging on the ground amid the sparse, coastal scrub on the inland side of the entrance path, and was shortly rediscovered on the stoney banks of the saltpans themselves, where all the pictures were taken. The only passerines which frequent this part of the island are the Atlantic Canary (Serinus canaria), Berthelot's Pipit (Anthus berthelotii), Sardinian Warbler (Sylvia melanocephala) and the scarcer Spectacled Warbler (Sylvia conspicillata). So here was a case of an unexpected species doing unexpected things in an unexpected area... 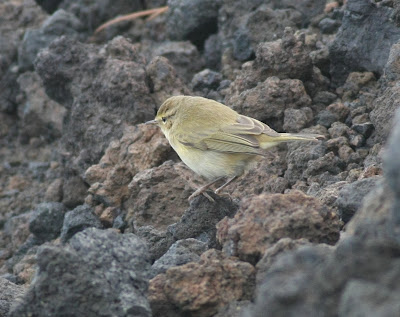 The photograph above enables the tertials and primaries to be appreciated: the length of the projection appears to correspond to a Chiffchaff. But are the greenish tones on the upperparts, and the patches of lemon-yellow on the flanks typical for a Canary Islands Chiffchaff? 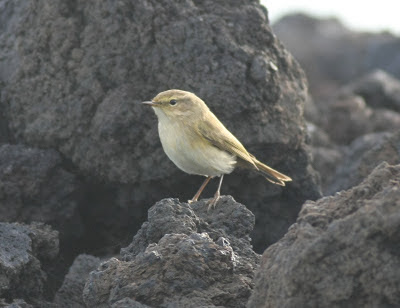 I have been through all my fieldguides and checked photographs on the Internet. To add to the difficulty there is, of course, an Iberian Chiffchaff (Phylloscopus ibericus), and three subspecies of Common Chiffchaff have been recorded in Macaronesia, the nominate collybita (W and C Europe), abietinus (N and NE Europe) and tristis (Siberia). 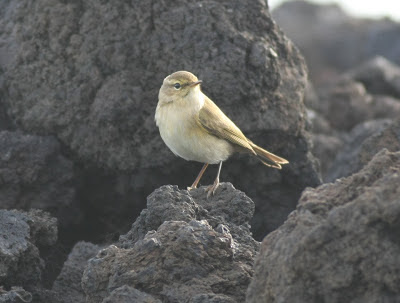 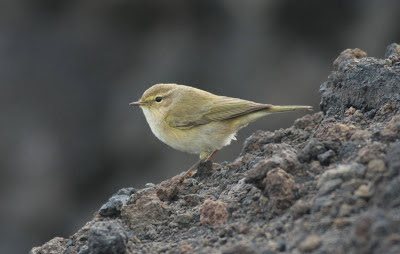 If bill-length is diagnostic, when seen from the above angle, this specimen appears to conform to the proportions for the Common, rather than the Canary Islands Chiffchaff. Unfortunately, the bird emitted no calls or song to aid identification. 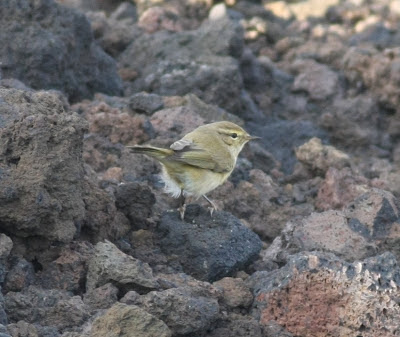 The last photo (above) shows the lemon-yellow tones around the vent and underparts of the tail.

Any comments regarding the identity of this specimen would be much appreciated. In the meantime, I plan to consult the ringers and other experienced passerine observers at rarebirdspain, and will post their verdict shortly.
Publicado por Robert Burton en 21:41 No hay comentarios: 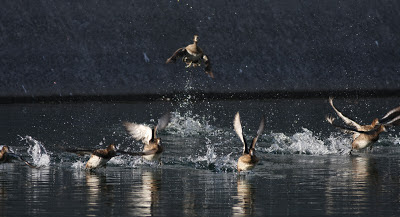 First out of the water, at the top of the image, is a recently-discovered Ring-necked Duck (Aythya collaris), which had been resting in one of the irrigation ponds in Las Martelas (Los Llanos de Aridane), together with 12 Tufted Ducks (Aythya fuligula). Even in this action shot of the birds taking flight, the two species can be easily differentiated...

"The Ring-necked Duck, a Neartic equivalent of our familiar Tufted Duck, is distributed in the breeding season throughout a large part of North America, from Alaska and British Colombia to Newfoundland and New England.  In the mid-1970s there was an estimated population of half a million, but numbers have greatly increased since then, as the bird's range has extended eastwards. The species winters along the coasts of the United States, mainly in Florida, and also in the West Indies, Mexico and Guatemala. Vagrants occasionally reach Venezuela and Trinidad, as well as Japan, Hawai and, of course, the Western Palearctic.

The first record in mainland Spain was a male seen in Gijón (Asturias) in 1978, and the first on the Canary Islands was a female found dead in San Sebastián de La Gomera in 1981. Since 1989-1990 the species has been observed regularly every winter, and so far there are 65 officially accepted records in Spain, 29 of which are from the Canaries. The vast majority of sightings occur between November and March. The species was removed from the British Rarities List in 1993, after 335 records had been logged." (Information adapted from Aves Raras en España, de Juana, E., Lynx 2006)

According to the same book, the last sighting of this species on La Palma was a female observed between February and March 2000, with a previous record from Santa Cruz in 1981, also a female. 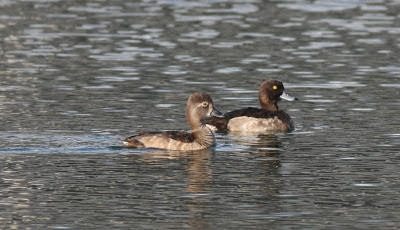 In the above photo, the duck's large head with its distinctive shape, the pale eye ring, the whitish, sub-terminal band on the bill, and the short, pale horizontal line behind the eye can all be appreciated, together with other plumage details of what I take to  be a female.

This sighting will be submitted to the Spanish Rarities Committee in due course.
Publicado por Robert Burton en 21:27 No hay comentarios: