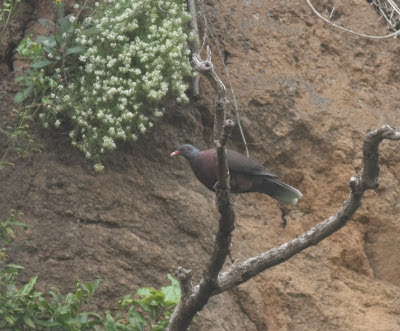 The present species, now simply known as the Laurel Pigeon (Columba junoniae) is endemic to the Canaries, but restricted to the western islands. It inhabits steep terrain covered with heath and patches of thermophilous woodland (probably its original habitat), and also certain pine forested areas, and has a marked tendency to move towards cultivated land at lower elevation. 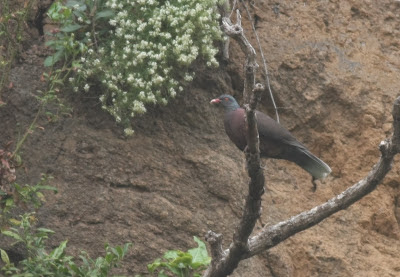 It lays a single egg in nests constructed on ledges or cracks in rock faces usually hidden by vegetation, and breeds between March and September, often laying several times. The bird's diet consists mainly of fruits and shoots of trees growing in the laurel forests or thermophilous woods, together with a variety of cultivated fruits, plus the occasional addition of certain invertebrates and assorted vegetables. 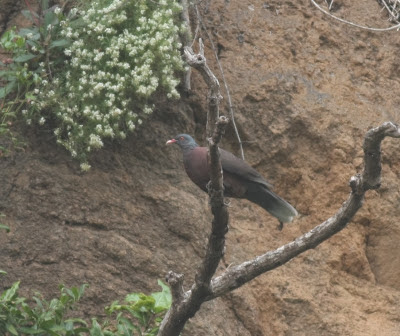 La Palma has the largest population of Laurel Pigeons of all the Canary Islands, the species being particularly abundant in the Barranco del Agua (San Andrés y Sauces) and other ravines in the northeast and north of the island. [Info adapted from Atlas de las Aves Nidificantes  en el Archipiélago Canario (1997-2003), Lorenzo, J. A. (Ed.) 2007]. 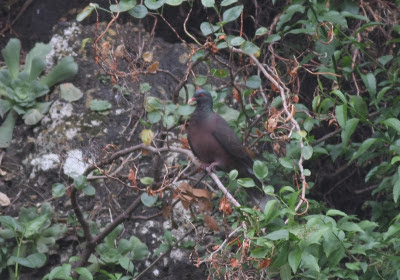 The present images were all taken in the Barranco del Agua this morning. The Laurel Pigeon is not an easy species to photograph with a 400mm lens. The sides of the barrancos are so steep that getting close to where the birds perch is virtually impossible. Light is also a problem, as the remaining patches of thermophilous woodland grow on the north facing slopes, which are in shade throughout the day at this time of year. 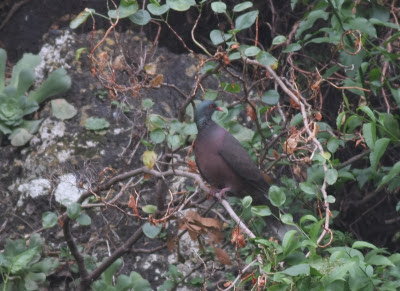 Both the Laurel Pigeon, and the more abundant Bolle's Pigeon (Columba bollii), are much easier to photograph outside their natural habitat, for example, when found feeding on cultivated fruit trees in sunnier locations. 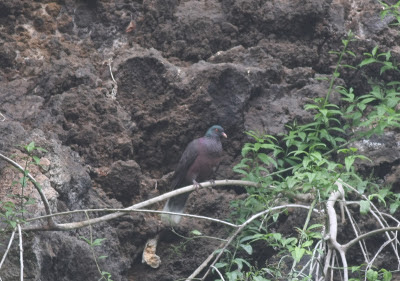 It is interesting to note that while Bolle's Pigeon is closely related to the Common Wood Pigeon (Columba palumbus), and is a recent colonizer to the Canaries (5My),  the Laurel Pigeon is not closely related to either and is probably an old lineage that might have colonised the Canaries a long time ago (20My). [Field Guide to the Birds of Macaronesia, García-del-Rey, E. Lynx Edicions 2011]. 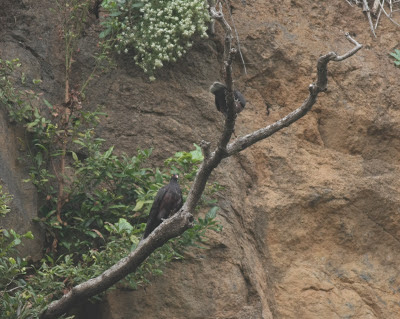 The present species, with its shorter wings, has a much slower and flappier flight action than Bolle's. All the birds observed today only made occasional, short sallies out from the sides of the gorge, and spent relatively long periods of time perched close to the cliffs or hidden from view on ledges. None flew for any distance along the length of the valley or crossed to the other side: their discreet behaviour may well indicate that some are already incubating eggs.
Publicado por Robert Burton en 22:14