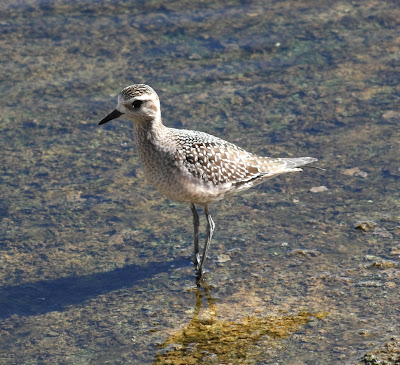 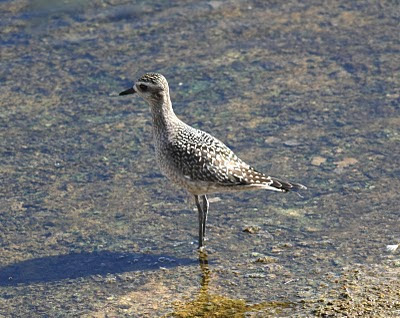 The second example of this North American migrant to appear on La Palma so far this season, two birds have also been recorded on Lanzarote in recent weeks: see appropriate links in Canary Islands Bird News for more details. 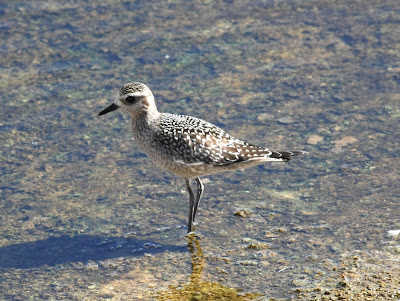 Plumage details of the previously-detected adult bird were harder to appreciate than in the present case: in the above photograph, there's no mistaking the four primaries projecting beyond the tertials, with two extending beyond the tail end.
This species "breeds in North American Arctic and subarctic tundra, and migrates south through interior North America, or via Hudson Bay, to reach the coast around New England, then over the Atlantic to South America, with the non-breeding season being spent in northern Argentina and Uruguay" (Shorebirds of the Northern Hemisphere, R. Chandler, 2009).
Presumably it is during that "over the Atlantic to South America" part of the migration route when certain individuals go astray...especially in autumns as stormy as the present one.

Another North American vagrant at the saltpans 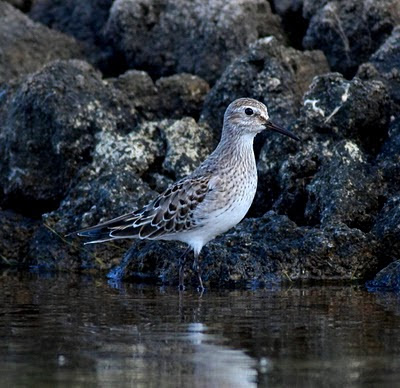 The saltpans at Fuencaliente recently attracted yet another North American migrant: following the Semi-palmated (Calidris pusilla) and Buff-breasted Sandpiper (Tryngites subruficollis) of two previous posts, on the evening of Oct 21 I discovered a solitary White-rumped Sandpiper (Calidris fuscicollis), feeding together with 3 Sanderlings (Calidris alba).

The island of La Palma actually holds the Spanish record for the largest single influx of this particular Nearctic wader, with 6 birds in Las Martelas on Oct 10 2005, 9 individuals at the Fuencaliente saltpans, and 4 at the seawater pools near the airport on the same date! (Ardeola, 54/2) 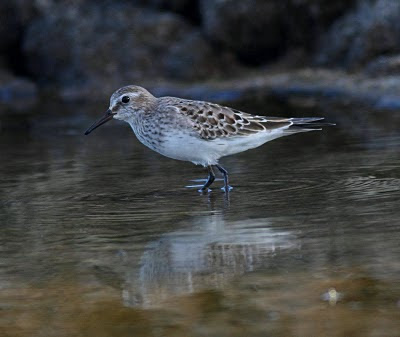 Note the wing tips projecting beyond the tail

Body size is somewhat smaller than the two Sanderlings shown above, and much more elongated in appearance. 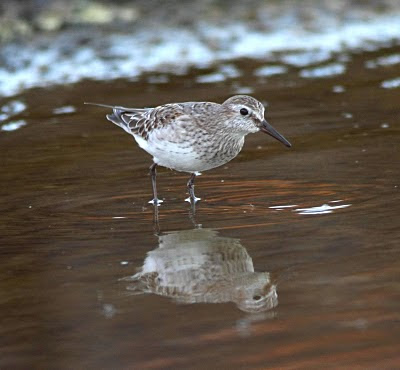 The pale brown colouring on the underside of the bill, and the white rump which gives the species its name, can be clearly appreciated above and below, respectively. 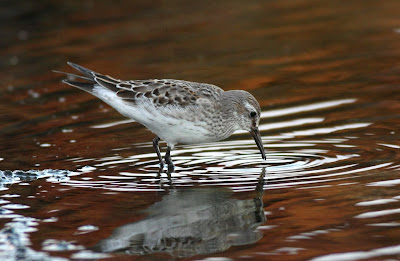 This record will be submitted to the Spanish Rarities Committee in due course.

PLEASE NOTE: If you wish to publish a comment, and expect a reply, don't forget to include your email address! Alternatively, you can write to grajaland@gmail.com 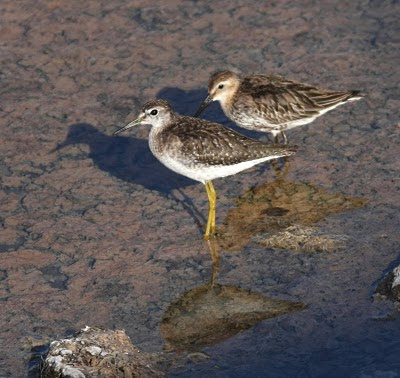 The Wood Sandpiper (Tringa glareola), shown above accompanied by a Dunlin (Calidris alpina), has been sighted several times in Las Martelas in recent weeks; in fact, there might actually be two birds in the area at present. This passage migrant is a much less frequent visitor than both the Green Sandpiper (Tringa ochropus) and the Common Sandpiper (Actitis hypoleucos). 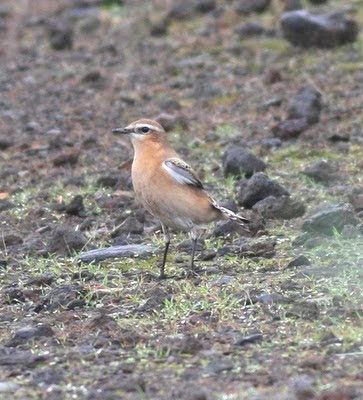 Solitary examples of Northern Wheatear (Oenanthe oenanthe) are recorded on the island of La Palma almost every year, and are considered "regular passage migrants" by T. Clarke (2006, "Birds of the Atlantic Islands"). 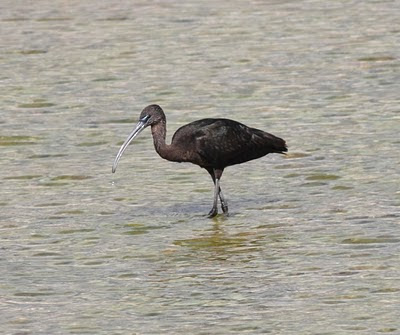 The Glossy Ibis (Plegadis falcinellus) featured in two previous posts, was still on the island on Oct 12, but had moved from the Tazacorte area to a group of irrigation basins in Las Martelas, where the above photograph was taken. 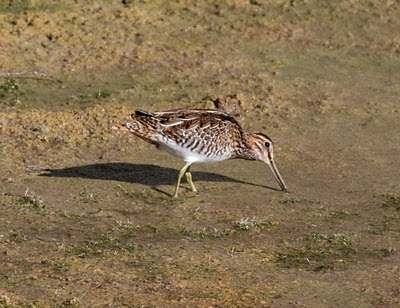 The Common Snipe (Gallinago gallinago) often winters in small groups on La Palma. So far this year numbers have been low, since hardly any suitable habitat is available for a species which forages in basins with muddy or soft sandy bottoms. The bird's diagonal probing, rather than vertical stitching, can be appreciated in the photo above. 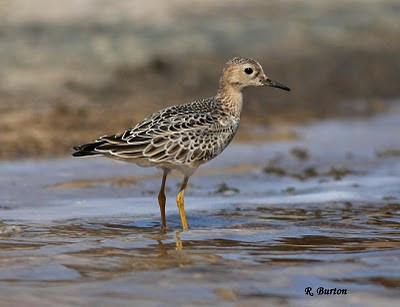 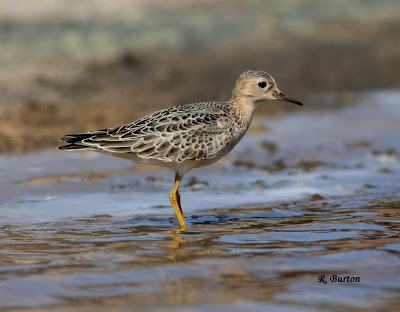 Above: two images of the juvenile Buff-breasted Sandpiper (Tryngites subruficollis), which was still at the Fuencaliente saltpans on Oct 3. 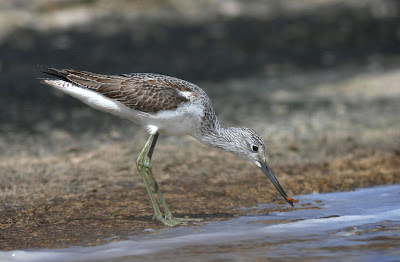 Common Greenshank (Tringa nebularia), also at the saltpans on the same date 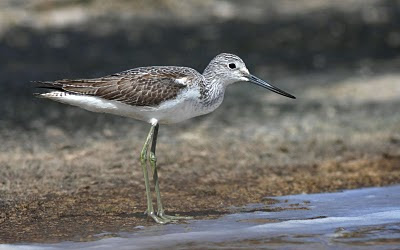 2 North American vagrants at the saltpans 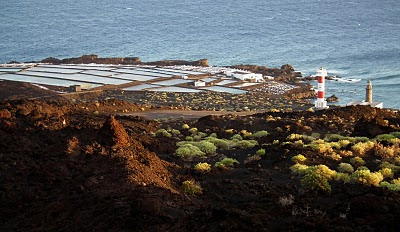 The saltpans at Fuencaliente attracted two rare North American vagrants in September: a Semipalmated Sandpiper (Calidris pusilla) on 24/09, and a Buff-breasted Sandpiper (Tryngites subruficollis), first detected on 29/09 but still present at the same location on 03/10.

The Semipalmated Sandpiper "breeds in the arctic and subartic tundra from far-eastern Siberia, Alaska to Baffin Island and Labrador, and winters in Pacific Central America, West Indies and northern and central South America. It is a vagrant to Galápagos, the Azores, and Europe east to Hungary" (Shorebirds of the Northern Hemisphere, R. Chandler, 2009). 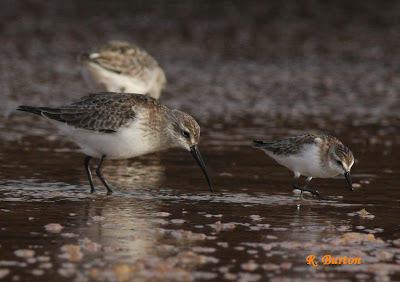 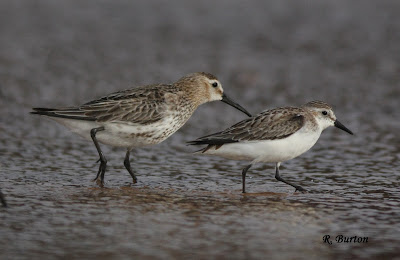 Apart from the short, straight, blunt-tipped bill, and the very short primary projection beyond the tertials, the critical identification feature, which gives the species its name, can be seen in the next two images - the partially-webbed toes: 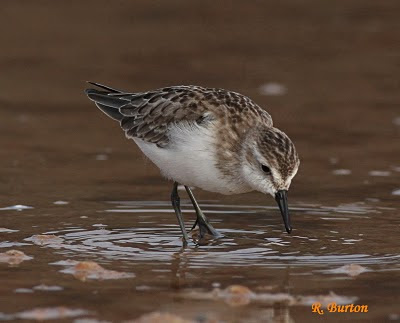 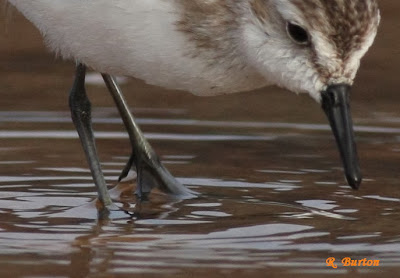 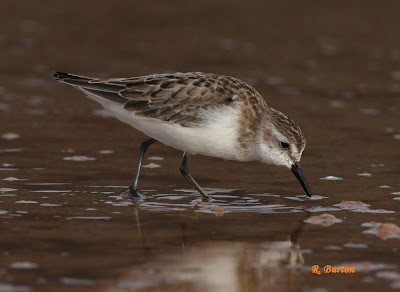 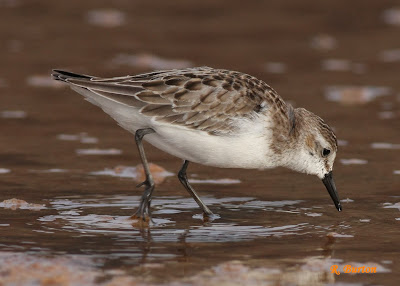 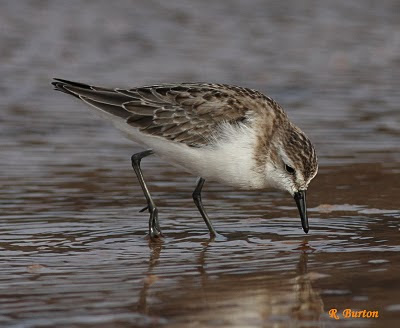 There have been 14 officially-accepted records of this species in Spain to date, mostly in the autumn, including 3 from the Canary Islands. Two of the Canary Island sightings are from Tenerife (Oct 1996 and May 1997) and the third is from Lanzarote (Nov 1998). The present bird could therefore be the first for La Palma, the 4th at regional level and the 15th for Spain as a whole, pending homologation by the Spanish Rarities Committee.

The second nearctic vagrant discovered at the saltpans is shown below. This juvenile Buff-breasted Sandpiper (Tryngites subruficollis) is also a long way from home! The species breeds "on well-drained grassy tundra, locally in north-east Siberia, northern Alaska and northern Canada east to King William Island" and spends the non-breeding season "on sparsely vegetated wet grasslands primarily in Argentina" (Shorebirds of the Northern Hemisphere, R. Chandler, 2009).

It is a much commoner visitor on this side of the Atlantic than the previous species, with 40 records from Spain, including 7 from the Canaries. This sighting is also the first for La Palma and will be submitted to the Spanish Rarities Committee in due course. 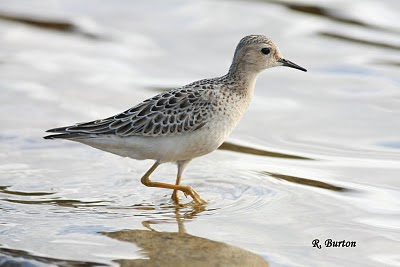 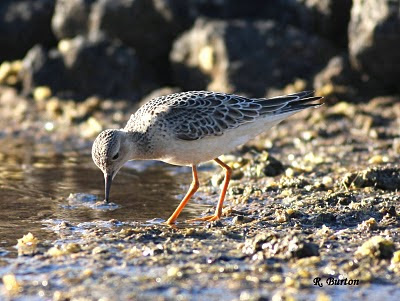 Further information regarding the status of the above species can be found on avescanarias.blogspot.com, the Canary Islands Bird News blog.
Publicado por Robert Burton en 22:10 No hay comentarios: