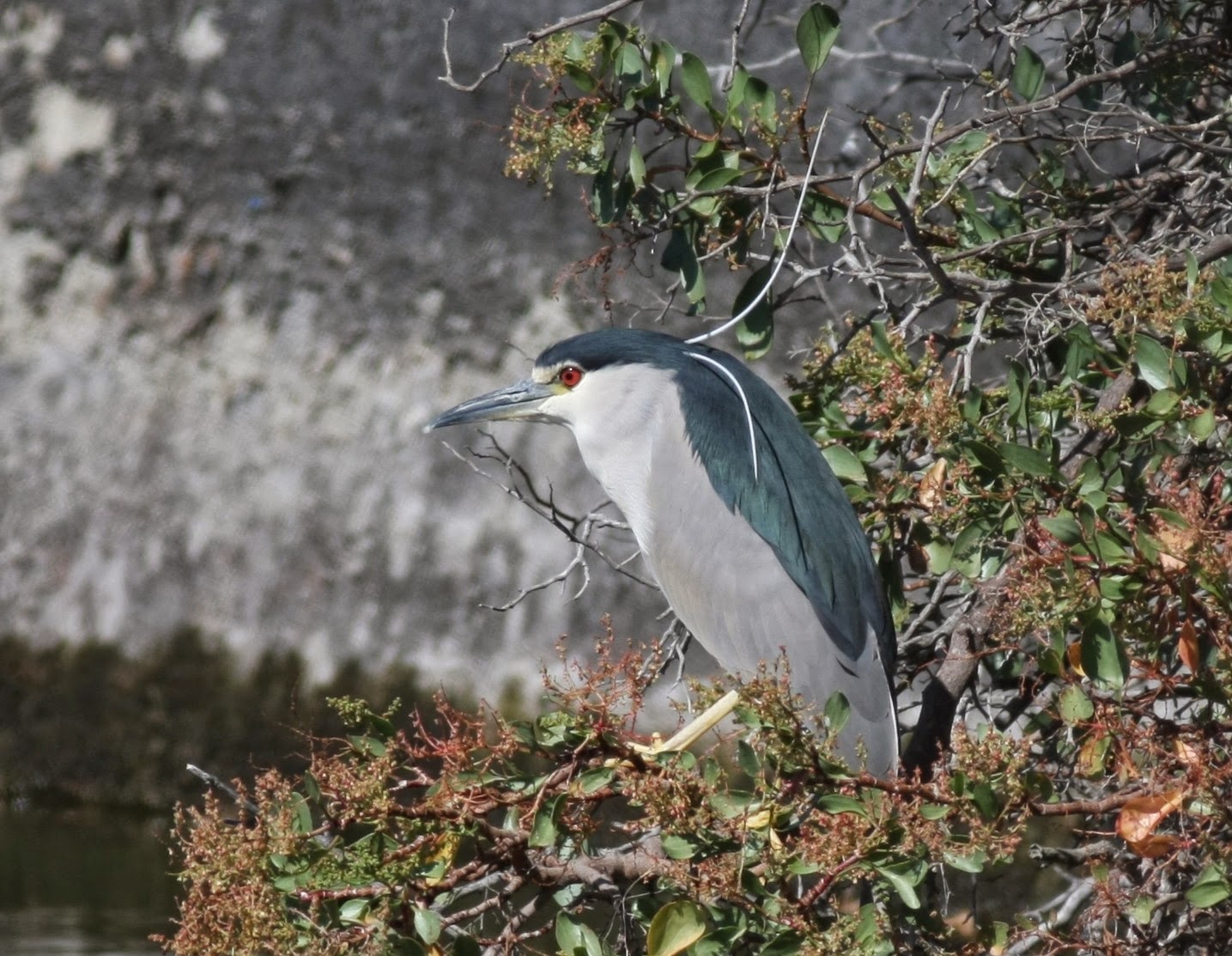 This is the second time this April that the the Black-crowned Night Heron (Nycticorax nycticorax) has appeared in "La Palma Birds". In the previous April Migrants 1 post, two individuals were shown in flight, one of them an adult, the other an immature. There are now at least two adult birds at various irrigation ponds in Tazacorte, whereas the immature bird seems to have disappeared from the area.

I found the adult above quietly perched in a well-illuminated Rumex lunaria bush, and the resulting images reveal the attractive greenish tones of the bird's plumage, and also show the conspicuous breeding plumes sprouting from the back of its head. 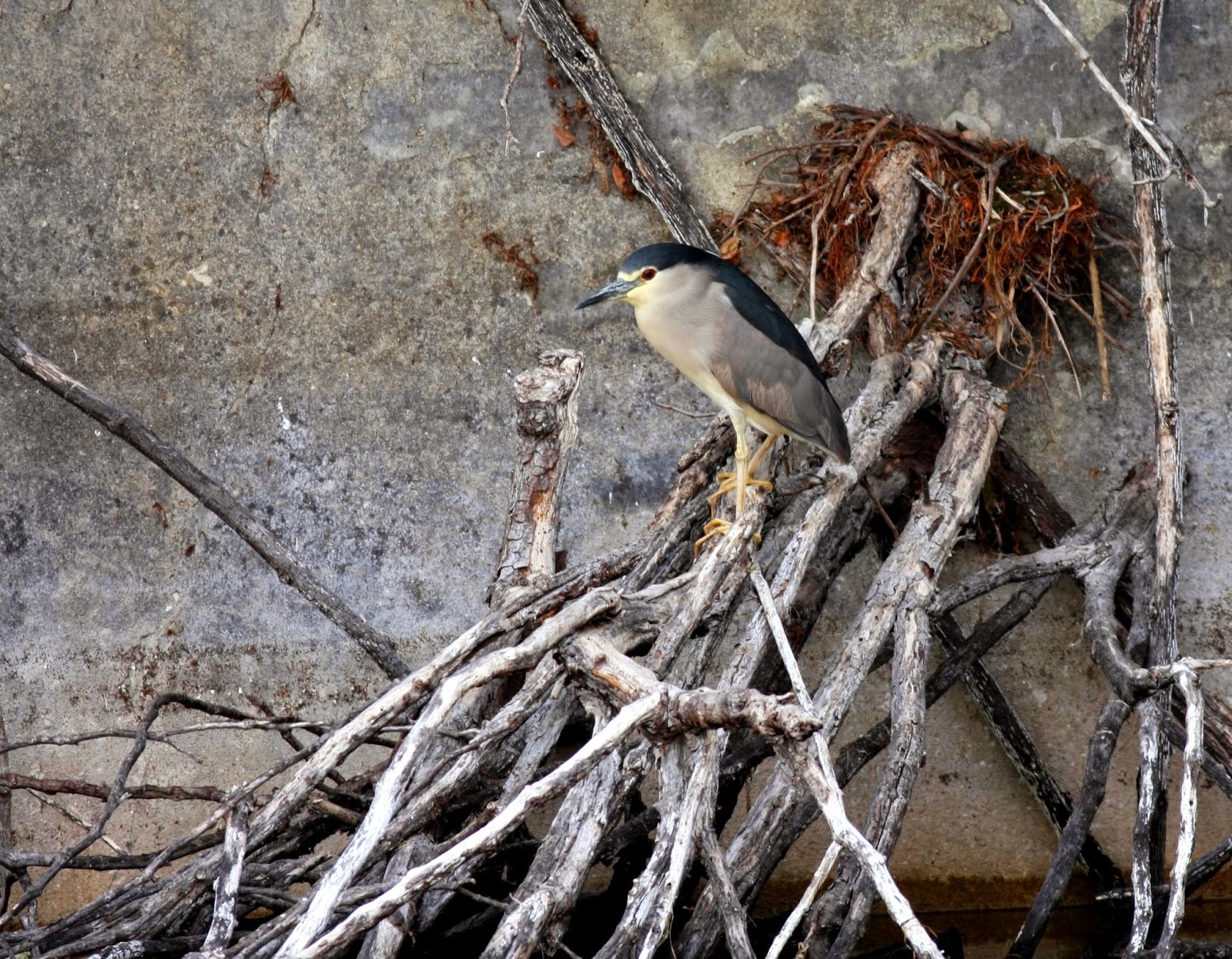 Above, is a shot of the second of the two adult birds, with less of the surroundings cropped out. As the water level in the pond has dropped significantly, a recently-occupied Moorhen (Gallinula chloropus) nest can be seen stranded above the perched heron. There are presently 4 Moorhen chicks in the pond and the parent birds have constructed another refuge closer to the water surface.

As mentioned in April Migrants 1, the Black-crowned Night Heron is regarded as a regular passage migrant to the Canaries, and has successfully bred on Tenerife in recent years. These cute little herons certainly make obliging subjects for photography... 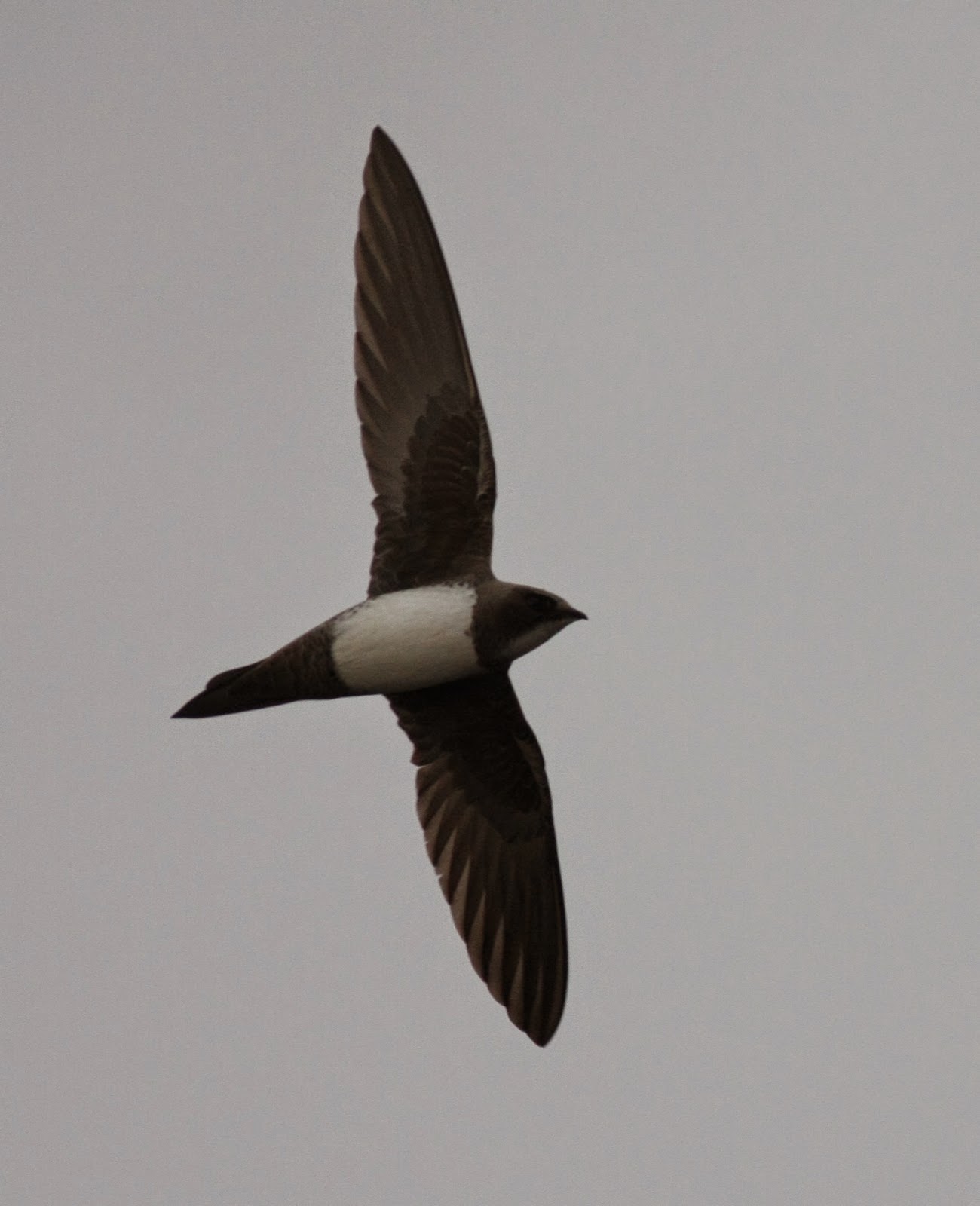 Another fairly regular passage migrant to the Canaries, with records from all islands, is the unmistakable Alpine Swift (Tachymarptis melba). There were two birds foraging over irrigation ponds in Tazacorte yesterday evening (April 16), with a flock of Plain Swifts (Apus unicolor) and about 12 Barn Swallows (Hirundo rustica) nearby.

According to the Field Guide to the Birds of Macaronesia (E. García-del-Rey, Lynx Edicions), this species occurs "in a wide array of habitats during passage in Macaronesia, and is sometimes associated with hirundines".

Alpine Swifts breed in mountains from Southern Europe to the Himalaya, and, like Common Swifts (Apus apus), are strongly migratory. They apparently wander widely while on migration... widely enough, in fact, to reach banana-growing areas on La Palma. 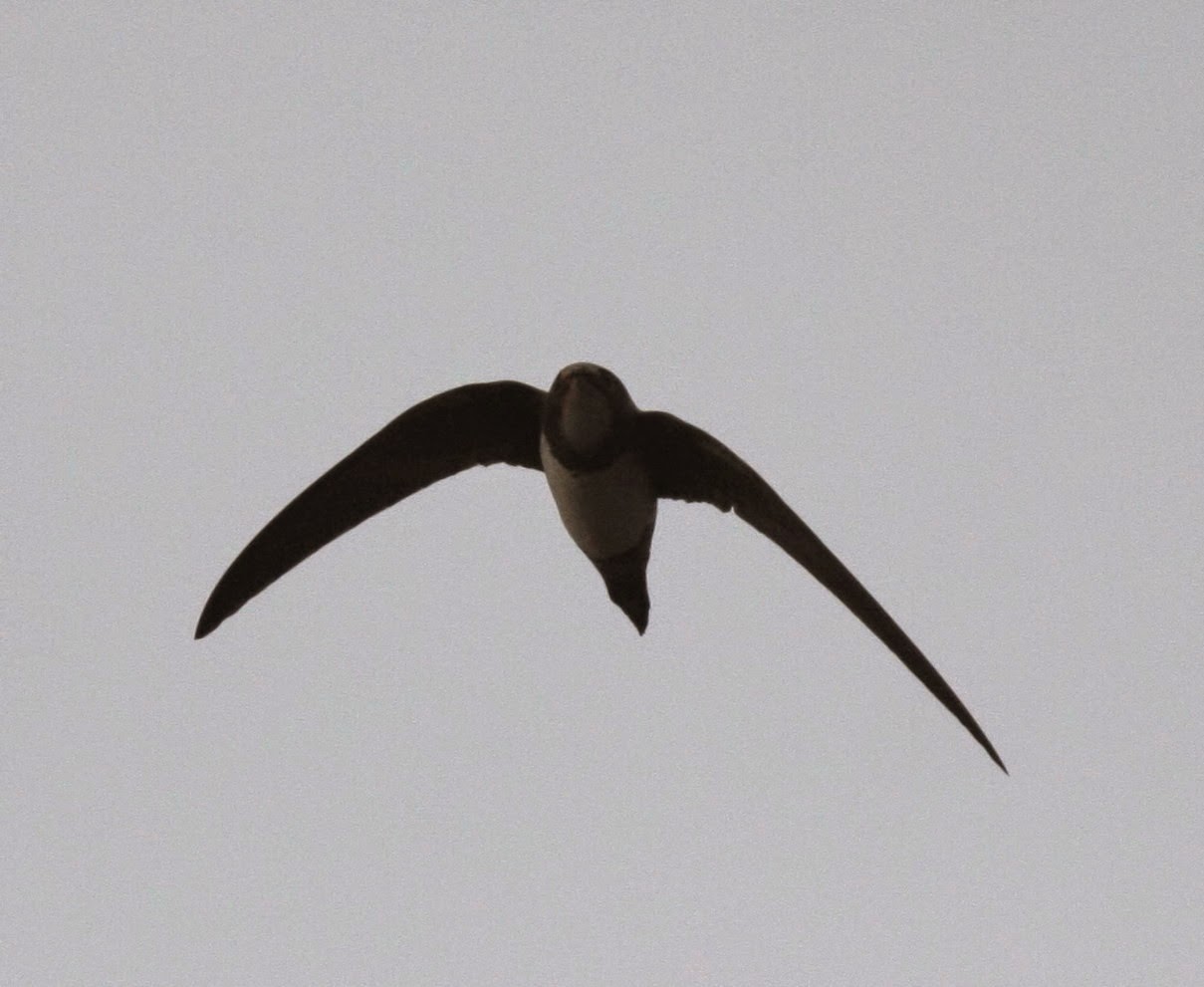 April has been a productive month - by island standards - for migratory birds so far.
Publicado por Robert Burton en 17:05 No hay comentarios: 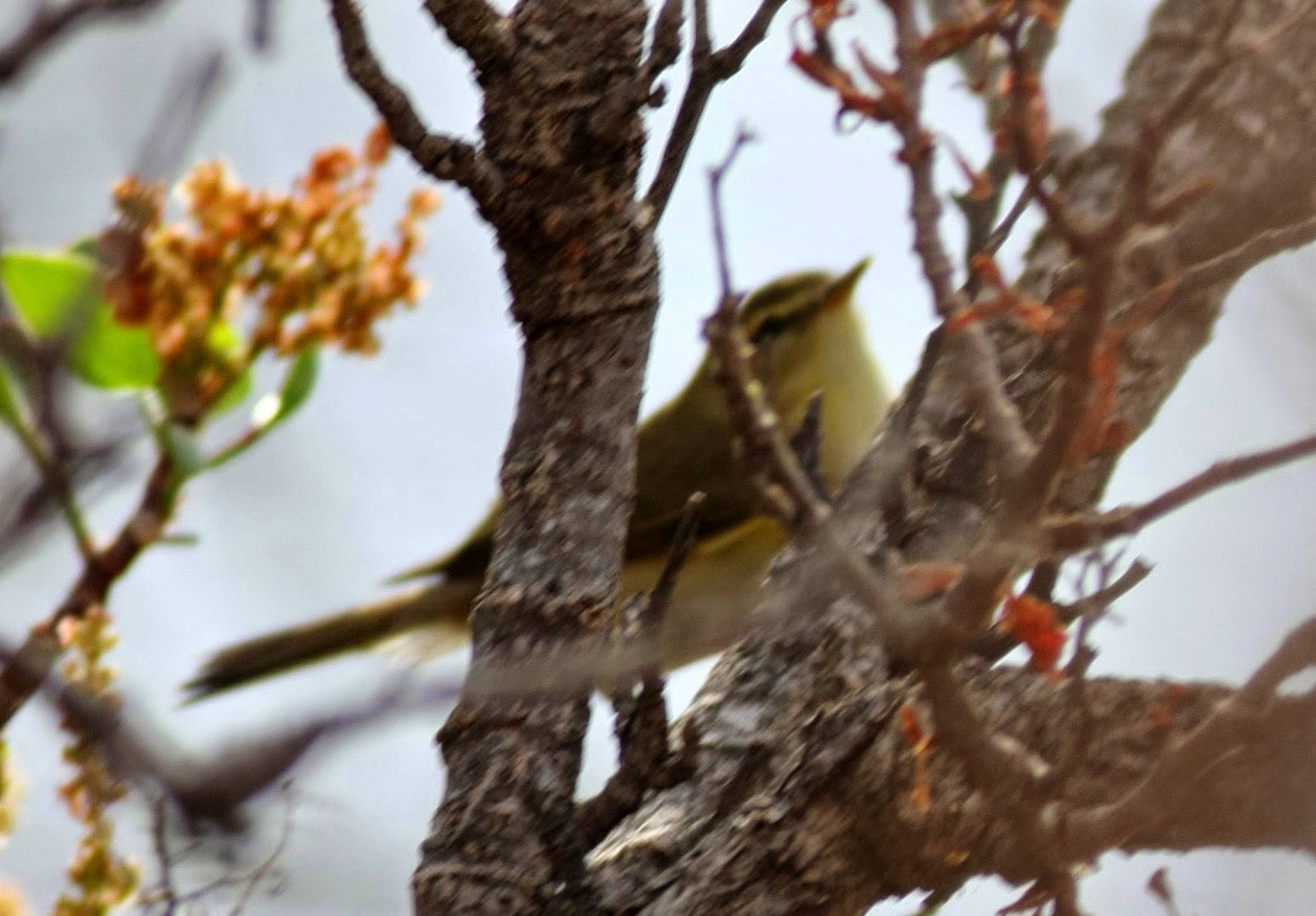 The persistent calling gave away the presence of this Willow Warbler (Phylloscopus trochilus),  as it flitted among the Rumex lunaria bushes surrounding irrigation ponds in Las Martelas (Los Llanos de Aridane). The soft, disyllabic sound stood out against the background twittering of resident species...for this warbler is a migrant to the Canaries. 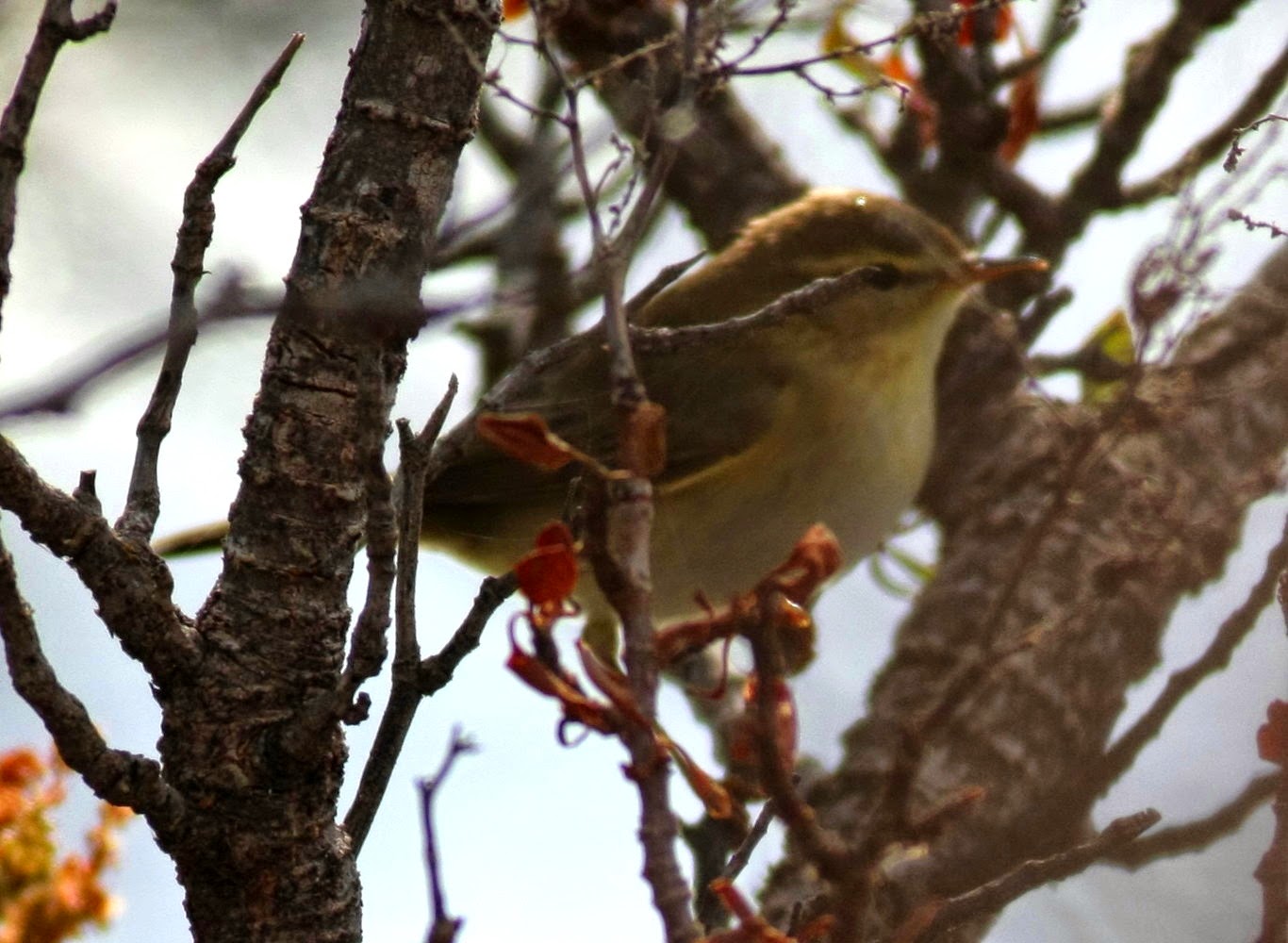 The only photos I managed to get are of poor quality, but allow many of the differences between the Willow Warbler and the locally-abundant Canary Islands Chiffchaff (P. canariensis) to be appreciated; the former species has an overall longer shape, generally brighter plumage, paler bill and legs, a more conspicuous supercilium, and whiter underparts. Unfortunately, the longer primary projection of trochilus cannot be appreciated in these images. 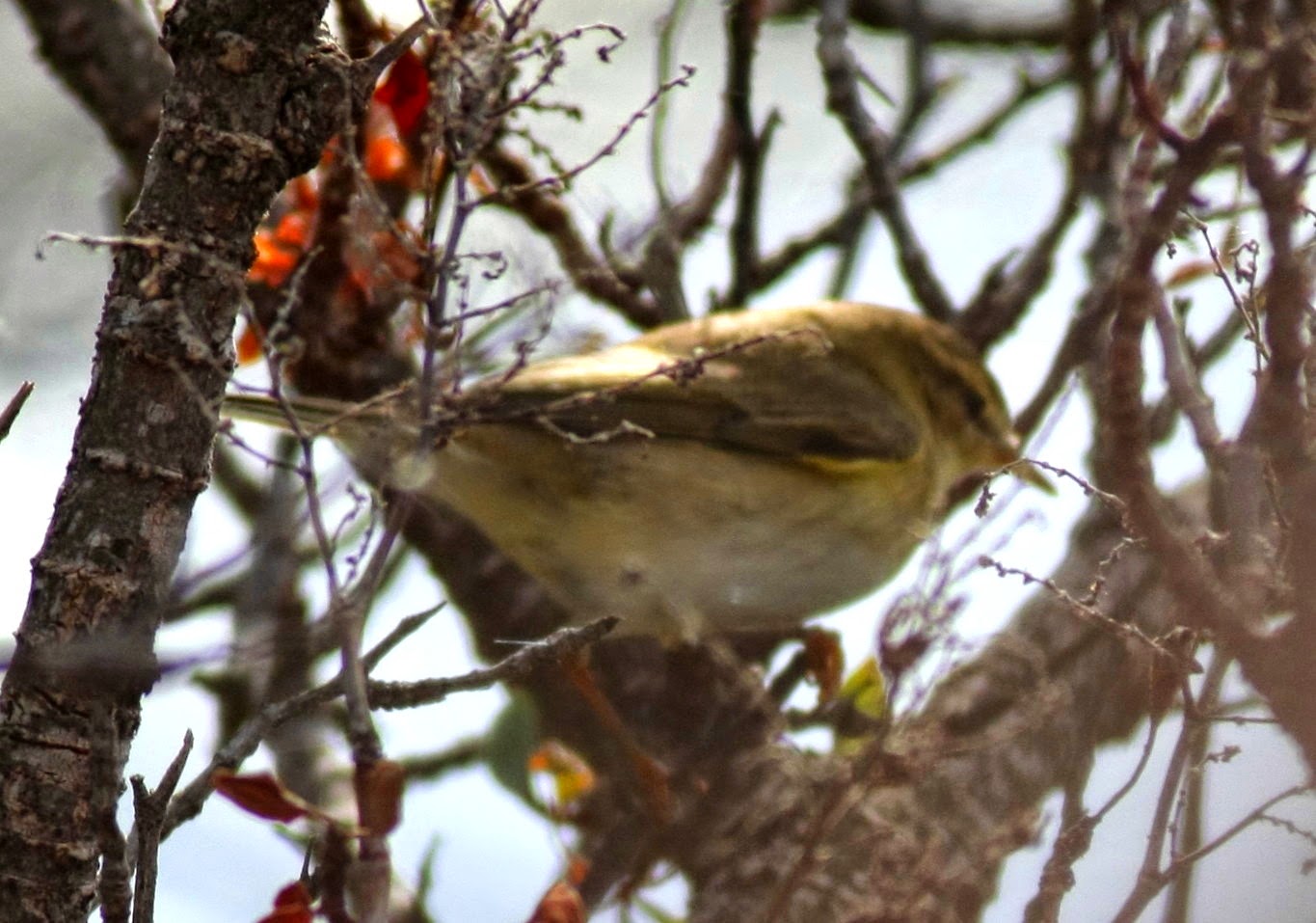 According to the Field Guide to the Birds of Macaronesia (E. García-del-Rey, Lynx Edicions), the Willow Warbler is a P1 migrant, with a "high" probability of being observed during migratory periods, and with records from all the Canary Islands. The present bird is one of a handful of sightings of the species on La Palma, but how many migrant Willow Warblers are overlooked every year?. 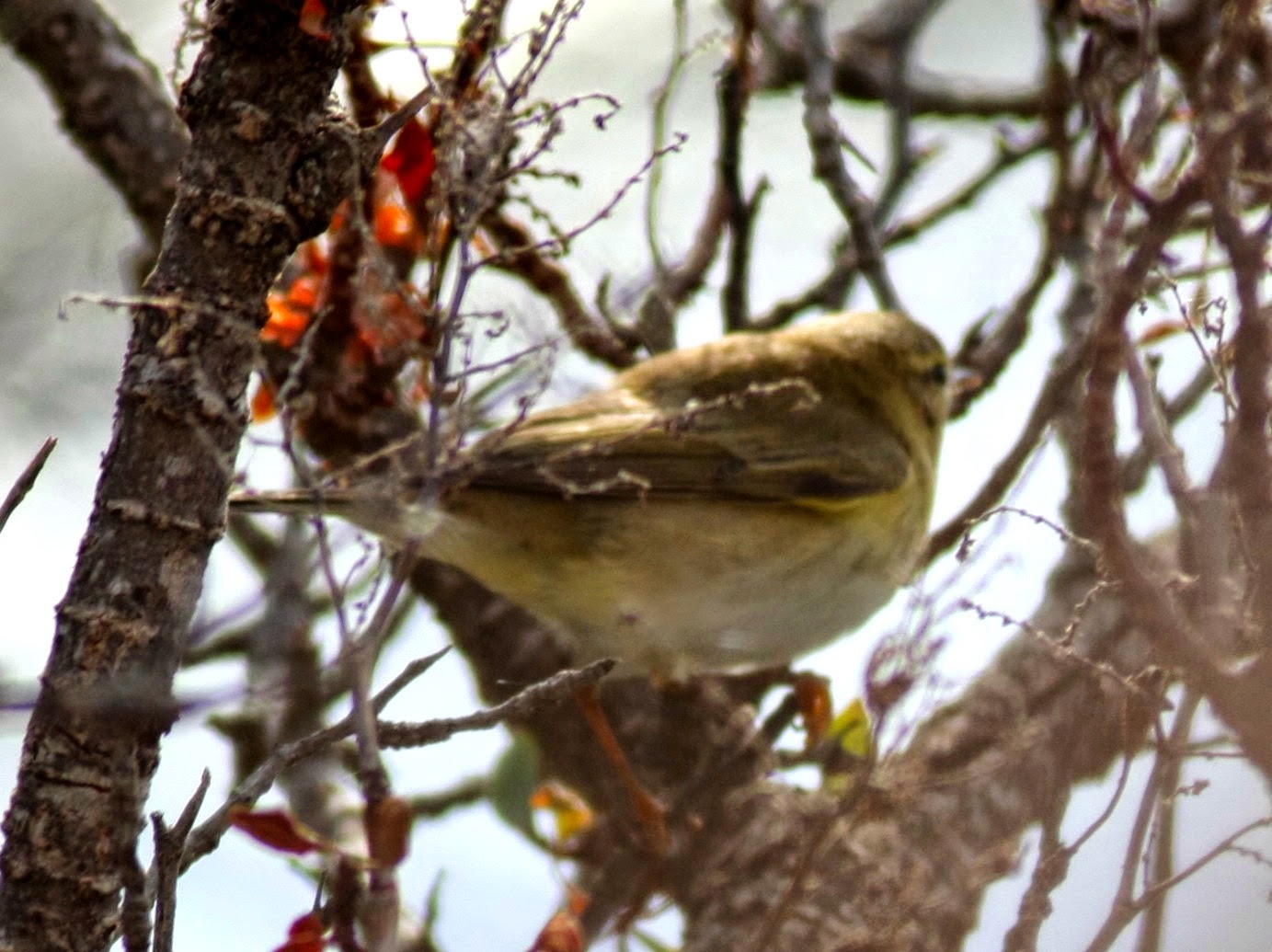 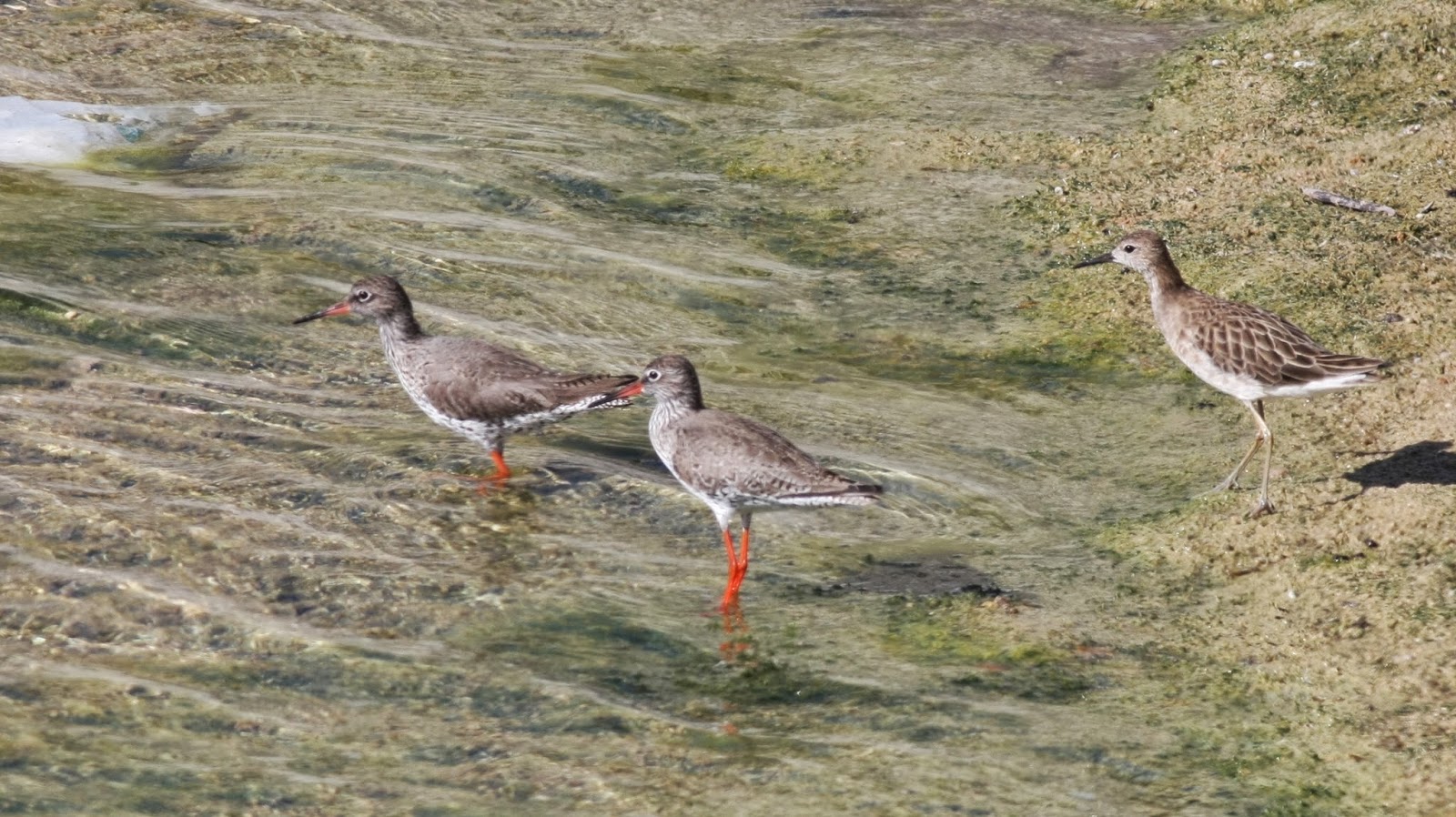 It doesn't get much busier than this on La Palma! At various irrigation ponds in Las Martelas this evening I found the following migrants: 2 x Common Redshank (Tringa totanus), 1 x Wood Sandpiper (Tringa glareola),  1 x  Ruff (Philomachus pugnax), 1 x Dunlin (Calidris alpina), 3 x Common Sandpiper (Actitis hypoleucos), and 2 x Greenshank (Tringa nebularia). None of these waders is considered a rarity, although the Wood Sandpiper is rated as a P3, a species with a relatively "low" probability of being observed during migratory periods. (See checklist in Fieldguide to the Birds of Macaronesia mentioned in previous post). 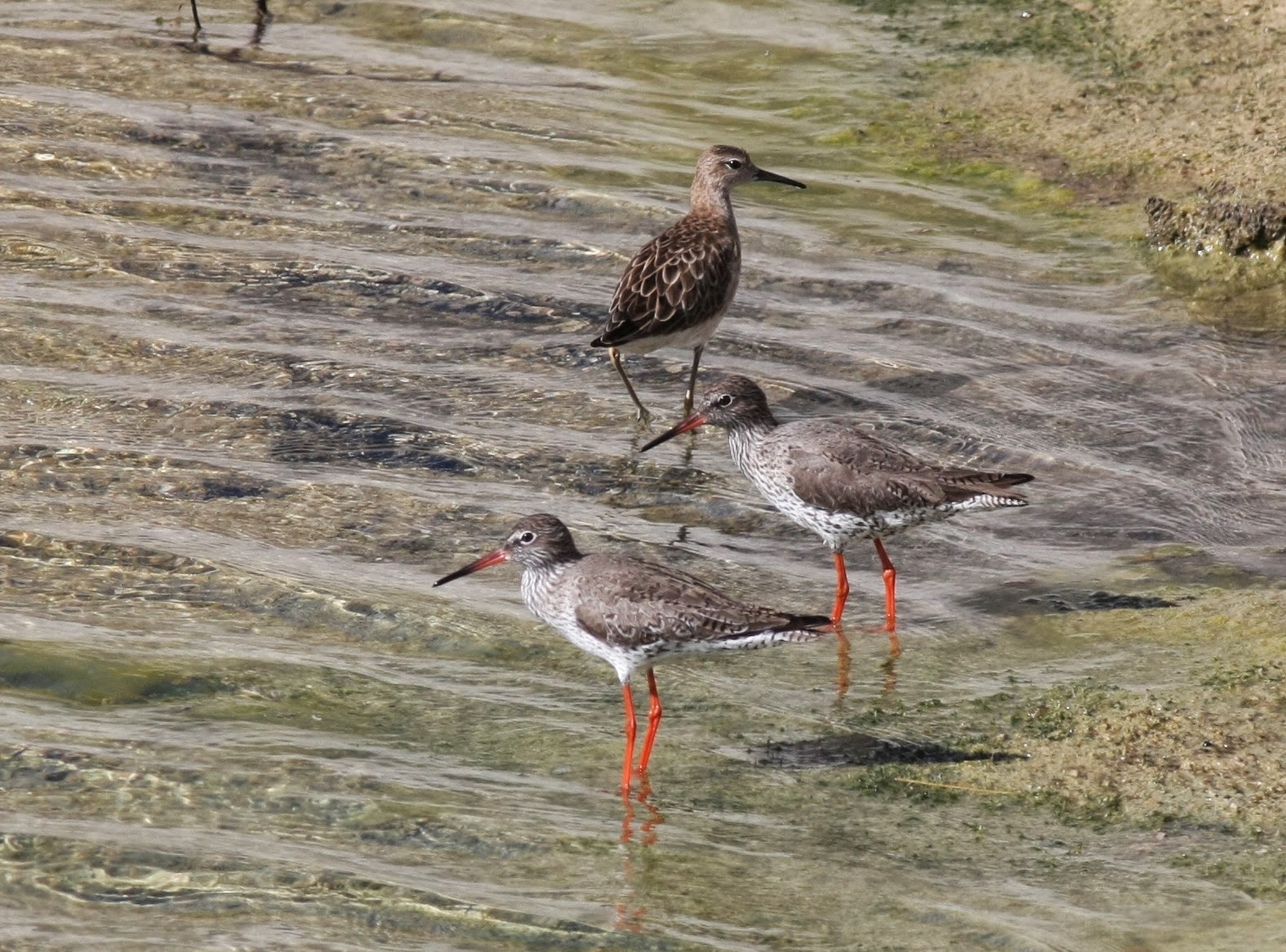 The next bird is a much less frequent visitor to the island. My last sighting of a Gull-billed Tern (Gelochelidon nilotica) on La Palma was back in September 2011, when a 1st year bird was observed flying over irrigation ponds in Las Martelas (Los Llanos de Aridane). The present adult was discovered in the same area this evening. 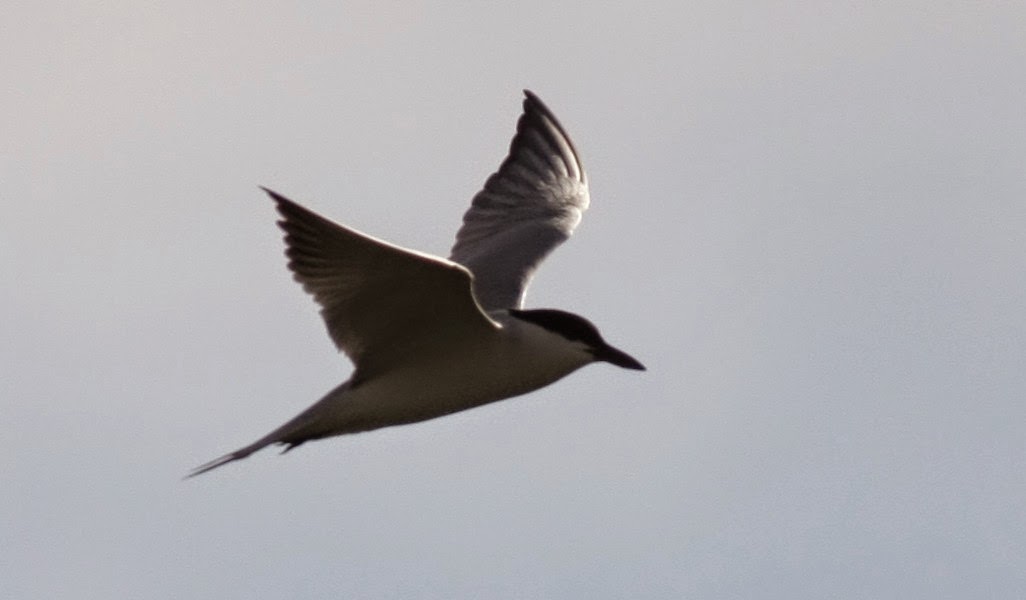 According to Rare Birds of the Canary Islands (E. García-del-Rey and F. J. García Vargas, Lynx Edicions), and without counting the present sighting, there have only been 16 records of this species to date on the Canaries: La Palma, n=1; El Hierro, n=2; La Gomera, n=1; Tenerife, n=5; Fuerteventura, n=3; Lanzarote, n=4. Most previous records were in spring and summer, but three were in autumn and one in winter.

The Gull-billed Tern is long-distance migrant which breeds in Europe to China, and also in the Americas; it winters in Africa and South America. 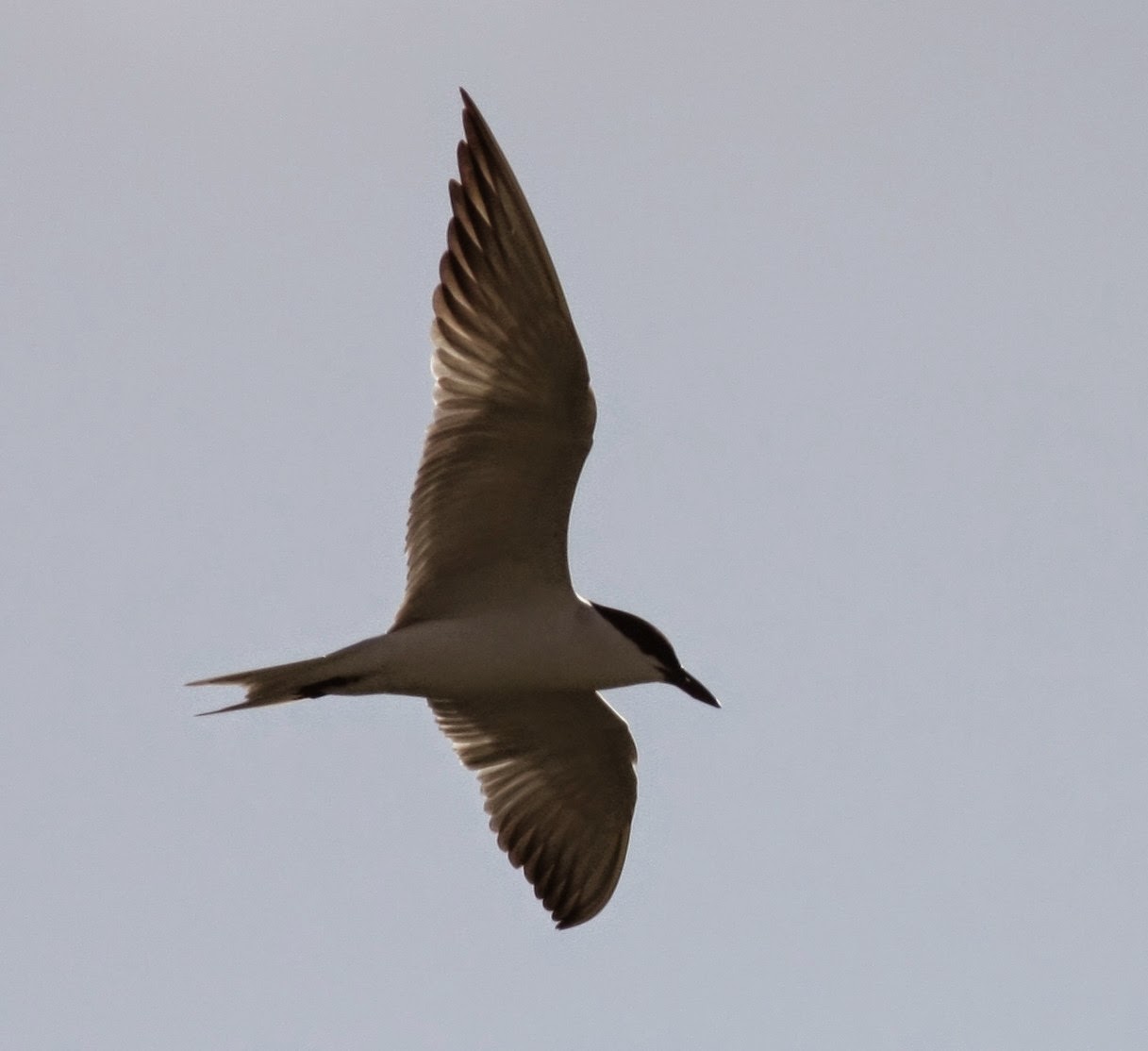 Moving from the irrigation ponds in Las Martelas to those in Tazacorte, I began by accidentally flushing the hyper-alert Purple Heron (Ardea purpurea) first discovered on March 31. In the same area, two Black-crowned Night Herons (Nycticorax nycticorax) were flying around searching for a secluded pond at which to land. 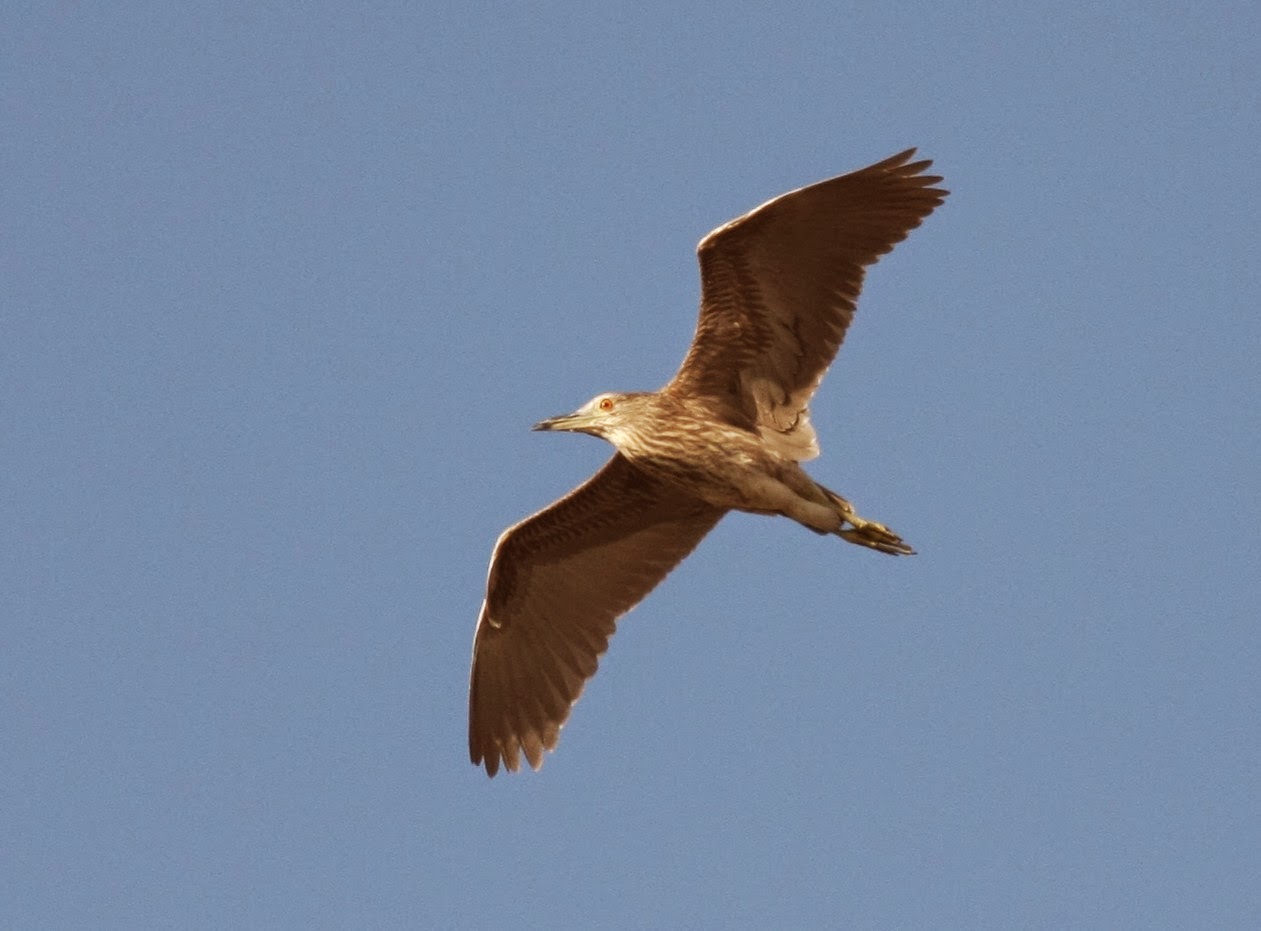 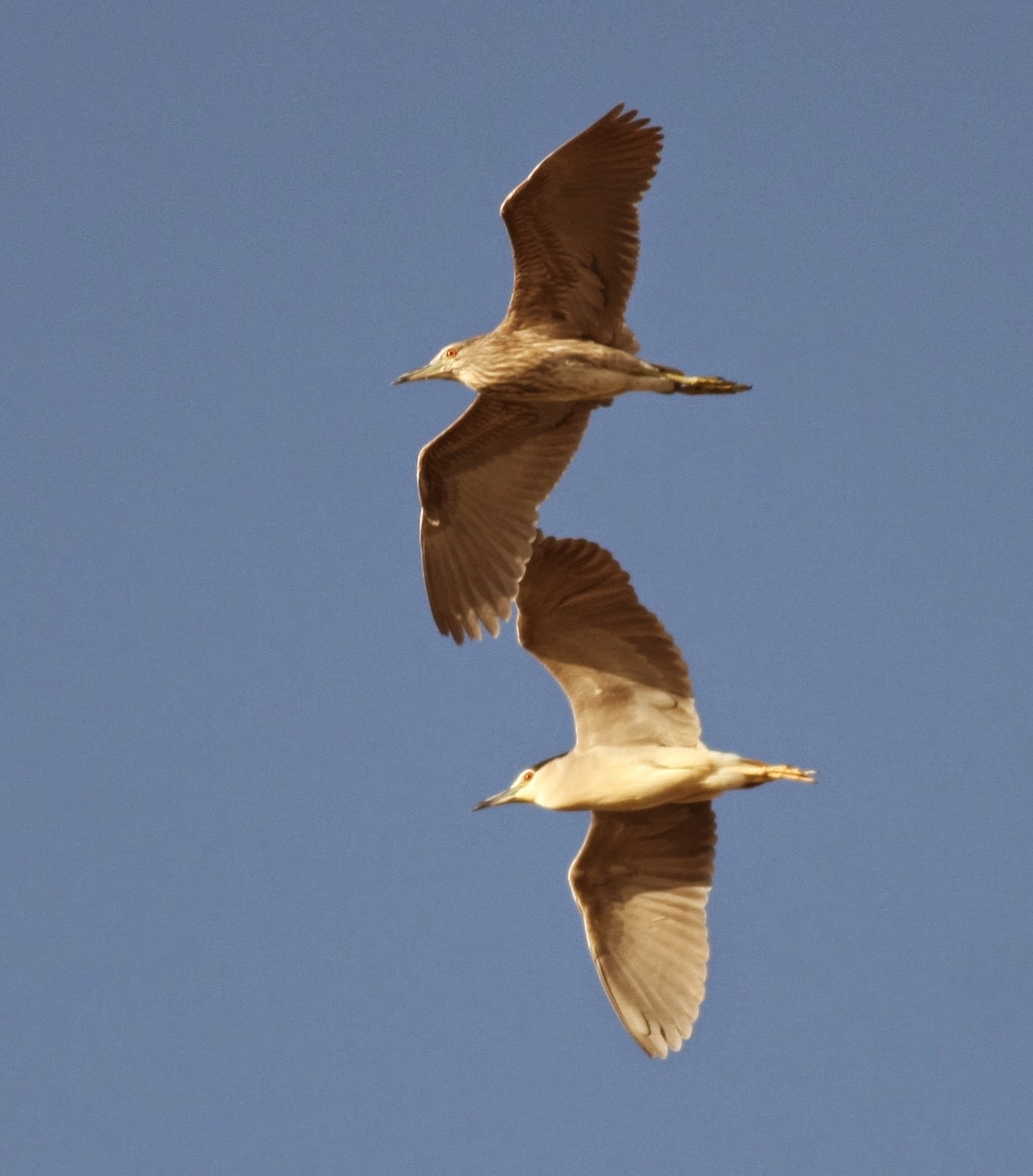 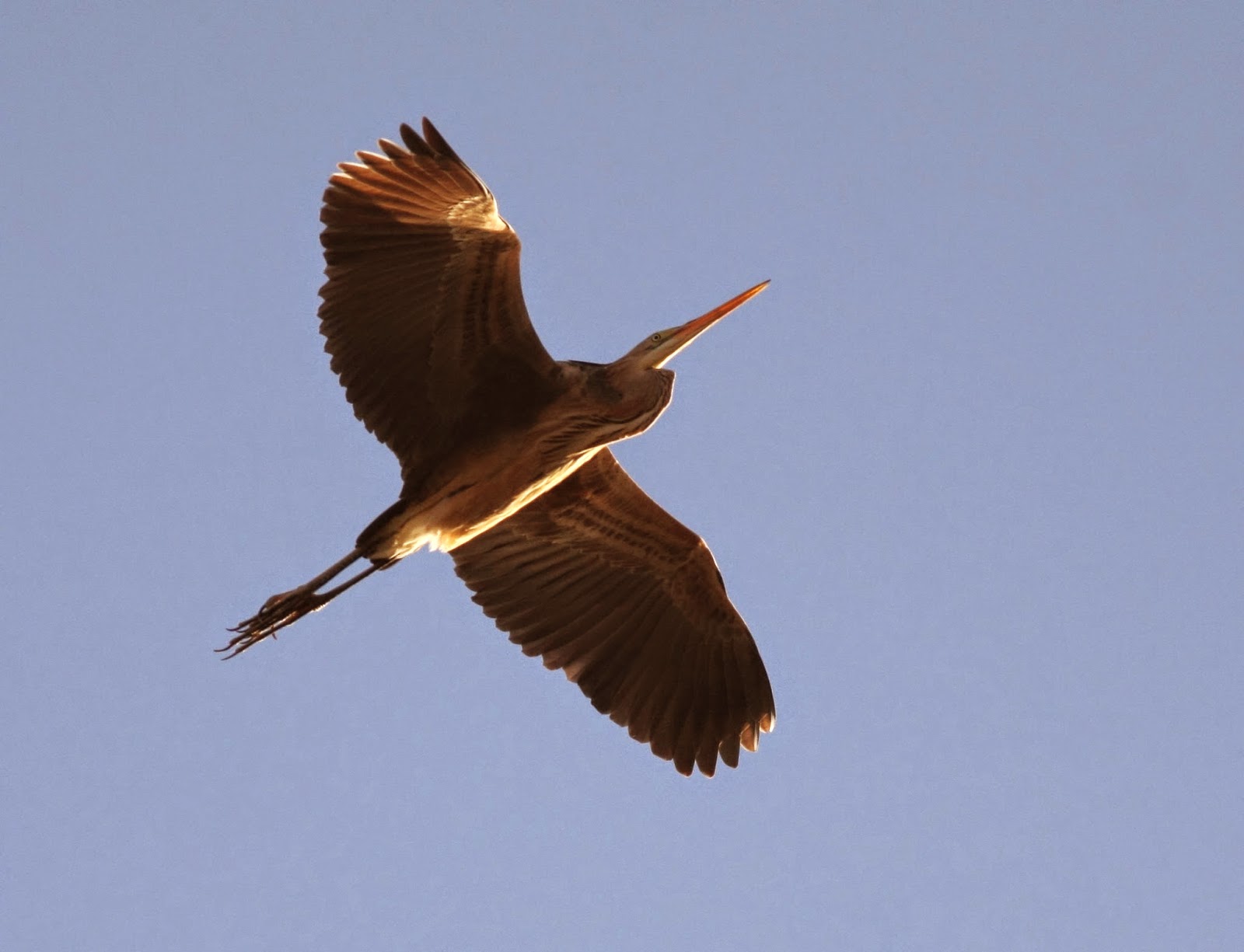 The Purple Heron (Ardea purpurea) is a passage migrant to the Canaries, with records from all islands except El Hierro. It is classed as a P2 migrant in the checklist of the Field Guide to the Birds of Macaronesia (Eduardo García-del-Rey, Lynx Edicions), meaning that the estimate of probability of observing this species during migratory periods is "medium", in a grading system where P1 indicates "high", and P3 "low" probability. 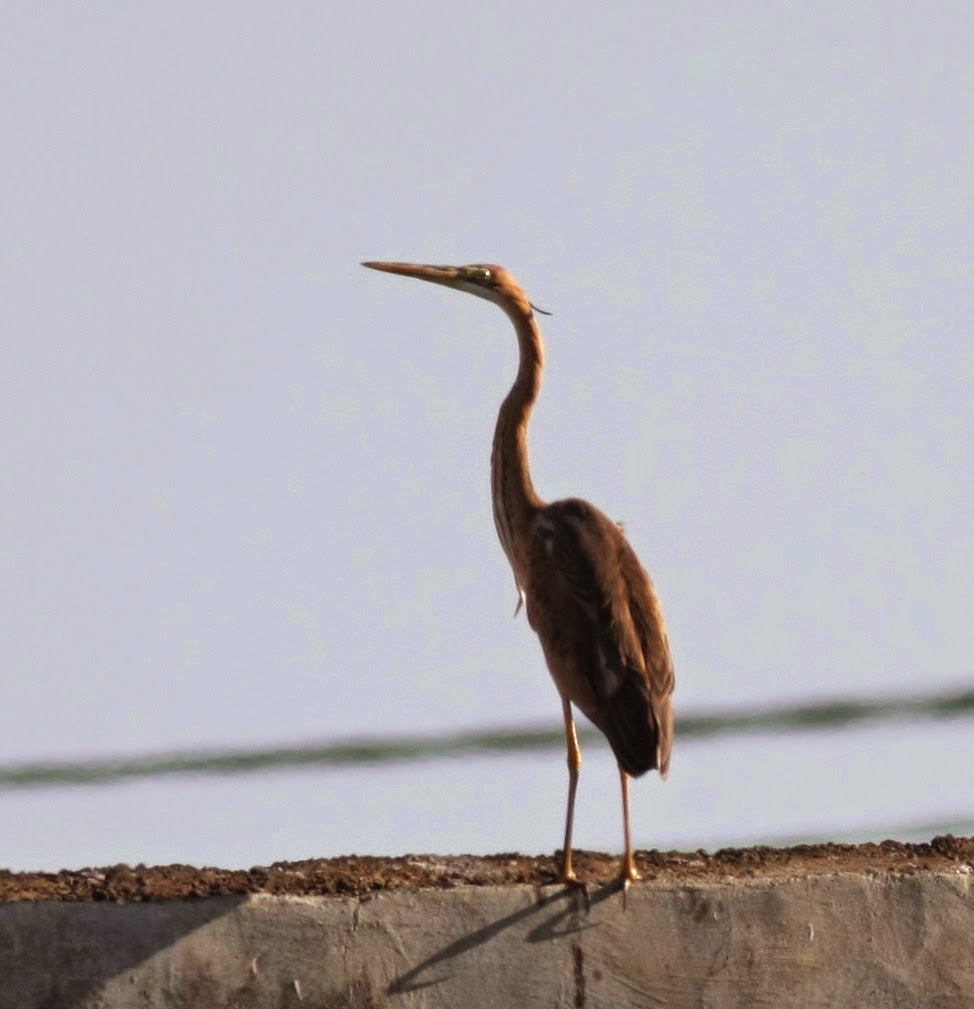 From my own experience on La Palma, I would tend more towards a P3 rating ("low probability"), since this is only my third sighting of Ardea purpurea on the island, the first being back in April 2011, the second in April 2014. On the first occasion two birds were seen at irrigation ponds in Las Martelas (Los Llanos de Aridane), and photographs of one of the herons appeared in the April 20 blog post. The 2014 record was at an irrigation pond in Tazacorte. 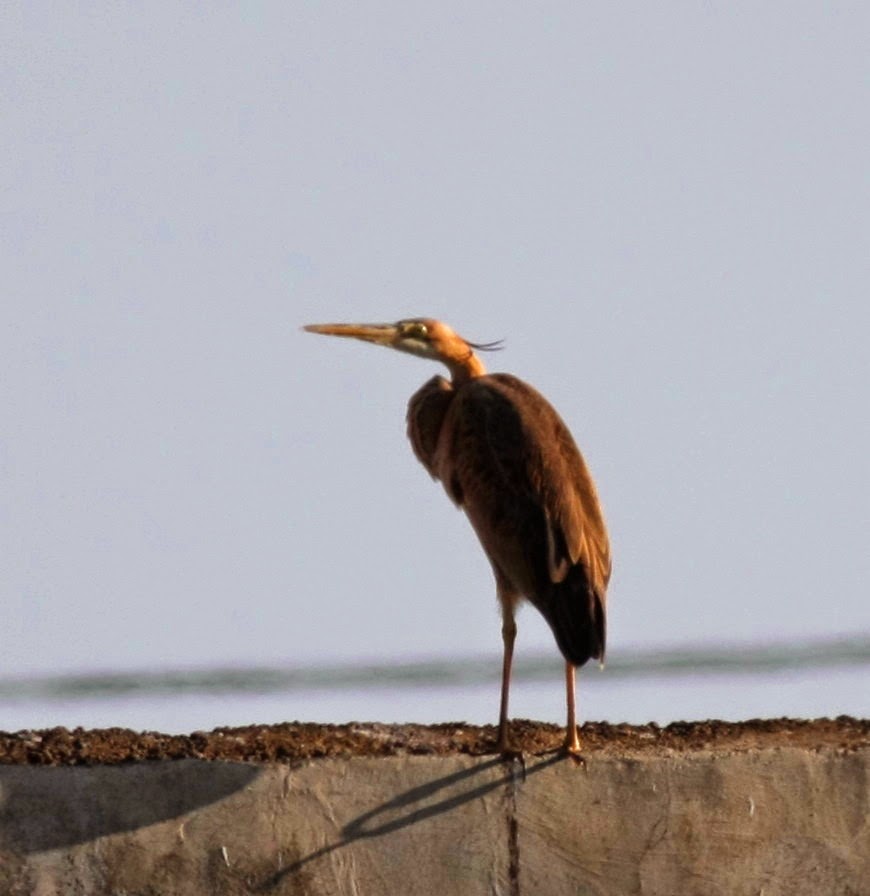 The present individual was first encountered at an irrigation pond in Tazacorte on March 31, when the second and third photos in the present post were taken.

After checking the area again on April 1 and 3, the Purple Heron was eventually relocated this evening, April 4. On this occasion, various images of the bird in flight were captured, including the one above.

Also present on the island at the moment is a Black-crowned Night Heron (Nycticorax nycticorax), which I accidentally flushed on April 3. The Night Heron and the Squacco Heron (Ardeola ralloides) are also classed as P2 migrants to the Canaries in the above-mentioned field guide, but in contrast to the Purple Heron, I have recorded around 8 of the former species and 14 of the latter on La Palma in the same period (2009-2015). Almost all sightings have been in the period April-July.
Publicado por Robert Burton en 21:44 No hay comentarios: