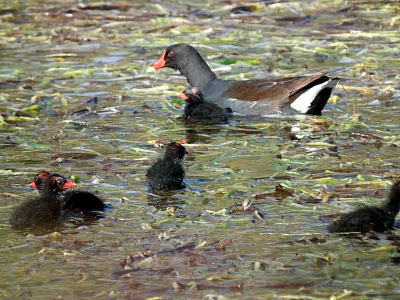 Parent with five of the six chicks

The Moorhen (Gallinula chloropus) breeding season is already underway: the first brood of the year, consisting of 6 chicks, appeared in one of several regularly-monitored irrigation basins in Tazacorte on Feb 13.

Information on this species has appeared previously in this blog, but here is a brief summary of the figures:

In 2009, 5 irrigation basins were monitored and a total of 13 broods detected, with 49 chicks hatching altogether, of which 10 were observed to survive until they eventually left their respective ponds as fully-independent young birds.

In 2010, the same 5 basins were monitored plus 3 others. Altogether, 18 broods were detected with a total of 67 chicks, of which 14 survived until they finally abandoned their ponds as independent juveniles.

As a matter of curiosity, the first brood of 2010 was discovered slightly later in February, at a different location, and also consisted of 6 chicks, of which 2 survived. 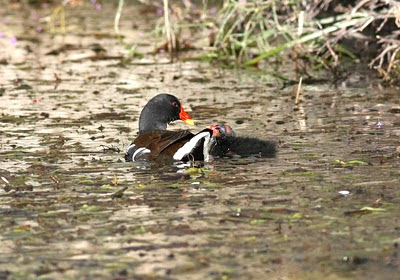 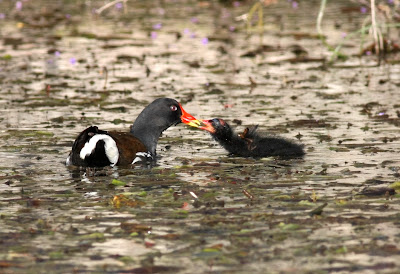 Both parents feed the recently-hatched chicks, most of which fail to survive, due to factors outlined in previous posts.
(see 28 Jul 2010 and 16 Dec 2009)
Publicado por Robert Burton en 21:37 No hay comentarios: 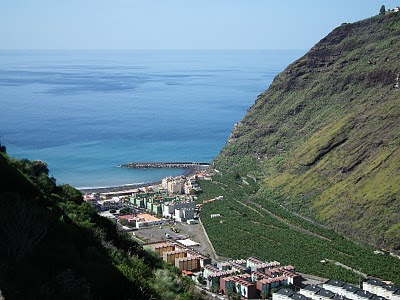 Mouth of the Angustias Ravine on the west coast of the island
The results of the Annual Ardeidae Census were better than expected on the west side of the island: at least three communal roosts have been identified, and smaller numbers of Little Egret (Egretta garzetta) and Grey Heron (Ardea cinerea) were also counted at other sites.

As suspected, some birds of both species fly past the mouth of the Angustias Ravine from early evening onwards, and then head up the coast towards Tijarafe. The precise location of the roost remains unknown, but is probably somewhere on the cliffs opposite the offshore fish-farm (see previous post). One of our observers positioned on the old quay at Puerto de Tazacorte, on the evening of Jan 28, counted 51 Little Egret and 5 Grey Heron flying northwards over the sea at low altitude. 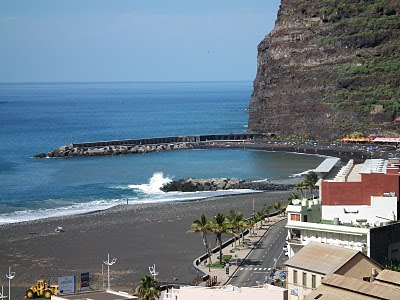 Another member of the our team visited the Dos Pinos reservoir, shown below. Although up to 35 Grey Heron have been recorded around the inner rim of this large irrigation basin in the past, on Jan 28 only 9 birds turned up. Prospections carried out a few days earlier revealed similarly reduced numbers. Perhaps higher counts have included contingents of birds on passage, and not only overwintering individuals. 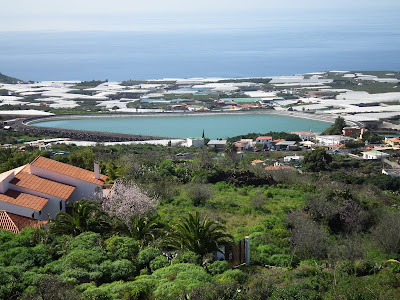 The recently-discovered roost in Tazacorte, featured in the previous post, yielded a total of 52 Little Egret and 1 Grey Heron, from 18:00h to about 19:25h, when light conditions made further counting impossible. The solitary Cattle Egret spotted on Jan 19 was not recorded on the evening of the census. 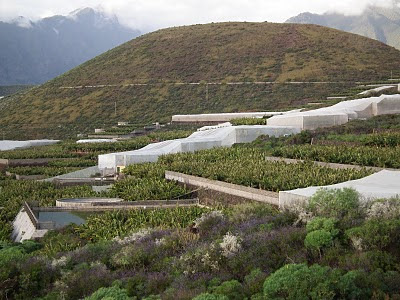 The Little Egret roost in Tazacorte. Birds spend the night in the tops of the banana plants located above and to the right of the irrigation basin. The photograph was taken on the evening of the census, from my chosen vantage point.

Other sites where significant figures were obtained:

Los Barros, a mainly avocado-growing and residential area above Los Llanos, yielded a total of 12 Little Egret and 3 Grey Heron in the vicinity of the numerous irrigation tanks.

The floating cages of the fish-farm in Tijarafe added a further 14 Little Egret and 12 Grey Heron.

TOTAL FIGURES FOR THE ISLAND: