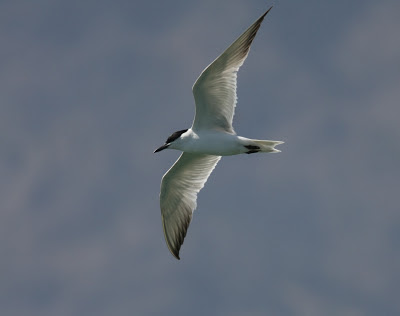 A welcome observation after a quiet spell in Las Martelas, this Gull-billed Tern (Gelochelidon nilotica) was discovered on the evening of June 21. I managed to get a couple of acceptable pictures on that occasion, but have posted the slightly better quality ones taken today, June 22. 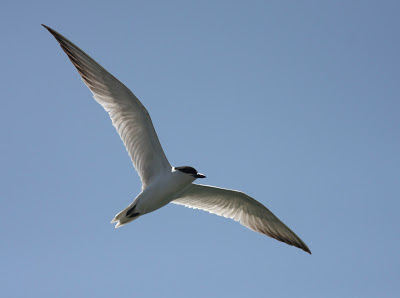 This is my second record of this species on La Palma, the first being in September 2011 (see Sep 12 2011 post). However, both currently available field guides to the birds of the Atlantic Islands/Macaronesia, by Tony Clarke and Eduardo García-del-Rey, refer to the Gull-billed Tern as a "passage migrant with records from all main islands except La Palma". 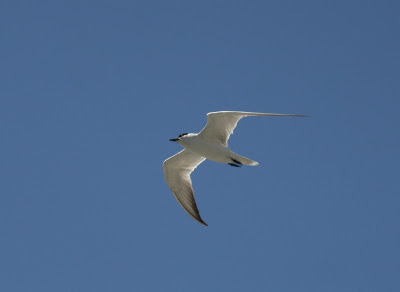 What a spectacular bird to observe, as it glided and leisurely circled above this artificial wetland! The wings gave the impression of being much longer than the 76-86 cm quoted in the guides. The dark trailing edge on the outer primaries is clearly visible in the three photos above, and also the short, thick, all-black bill. 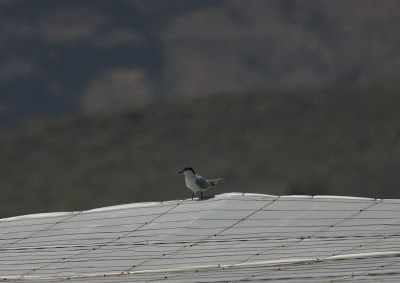 The tern was attempting to pluck insects from the surface and edges of some of the irrigation ponds, and only perched briefly once, on top of a plastic greenhouse, some distance from where I was standing. The next two shots, unfortunately rather blurred, illustrate the foraging techniques: 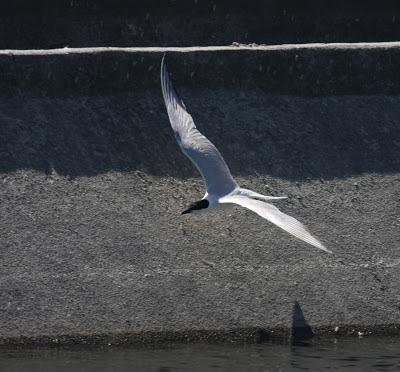 Above, the bird is seen scouting the banks of an irrigation pond, and below, a captured prey item, probably a recently-emerged dragonfly, is visible.