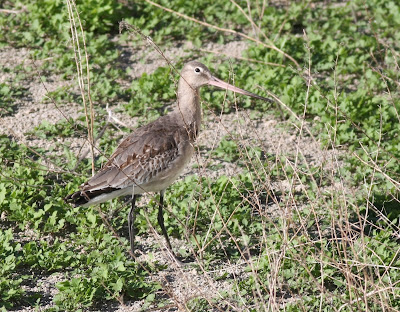 The present post is an overview of bird sightings in December 2017.

The solitary Black-tailed Godwit (Limosa limosa) shown in the first photograph was observed in an area of irrigation ponds (Las Martelas, Los Llanos de Aridane) on Dec 19 and 20. The bird was foraging in two different ponds, one of which was completely dry. 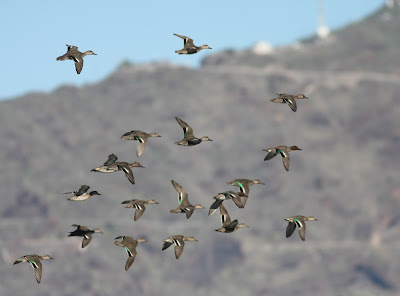 Part of a flock of 20 Eurasian Teal (Anas crecca) photographed in Tazacorte, Dec 23

Varying numbers of Eurasian Teal (Anas crecca) are regular annual migrants to La Palma. There are presently about 20 birds in the Tazacorte area, 11 in the Laguna de Barlovento, plus another 2 individuals at irrigation ponds in Las Martelas (Los Llanos de Aridane). 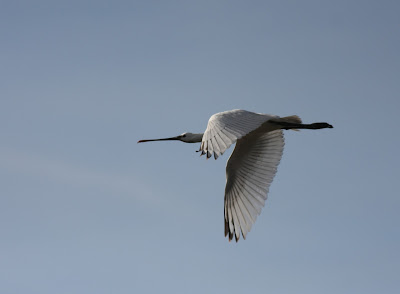 A juvenile Spoonbill (Platalea leucorodia) was seen at the saltpans in Fuencaliente on Oct 16 and featured in a previous post. The bird shown above, possibly the same individual, was photographed at the same location on Nov 30 in rather unusual circumstances.

The Spoonbill was approaching the saltpans from the northeast, and was just about to land, when a helicopter appeared out of the blue and scared it off! It is rather odd for a chopper to be flying around the southern tip of the island; in fact, I can't recall ever seeing one there. Anyway, the bird flew back in the direction it had come from, so I never actually got to see the spoonbill on the ground. 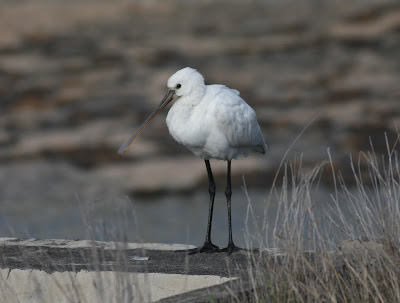 Other interesting records from the end of 2017 include a Squacco Heron (Ardeola ralloides) seen in flight, but unfortunately not photographed, above irrigation ponds in Las Martelas on Dec 17. 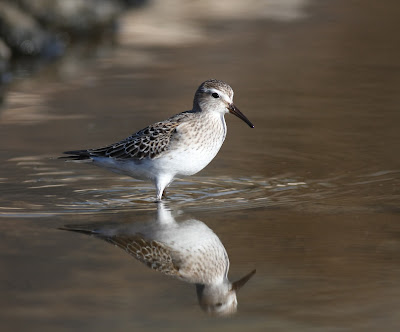 The White-rumped Sandpiper (Calidris fuscicollis) shown above was observed at the saltpans (Fuencaliente) on Nov 30, from about 09:15 onwards.

The next bird, also a White-rumped Sandpiper (C. fuscicollis) was observed on the same morning in an irrigation pond in Las Martelas (Los Llanos de Aridane), from about 11:50 onwards. 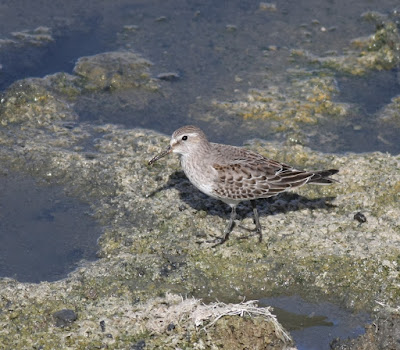 Readers may recall from my previous post that on Nov 28, there were two of these Nearctic vagrants in Las Martelas, precisely in the same pond where the above bird was photographed.

Did one of the two sandpipers fly to an unknown location (possibly leaving the island altogether), or did it just move to the saltpans?

You would imagine that close examination of the various photos I took would settle the doubt. But, distinct light conditions, different angle of view, and varying distance from my subject make comparison tricky. I hope to find time to devote to the matter over the next few days.

Both the freshwater ponds and the saltpans provide suitable stopover habitat for this Transatlantic migrant, and my previous records of this species have been split more or less equally between the two sites.

So, nothing strange if one of the birds decided to switch location. But neither is there anything strange for there to be more than two birds on the island at the same time. There was an influx of about 50 birds on the Canary Islands in October 2005, with nine individuals recorded together on La Palma.
Publicado por Robert Burton en 22:03 No hay comentarios: