Osprey KL9 was observed fishing at the Dos Pinos reservoir this morning, Oct 28.

The bird circled high over the water for  about 7 minutes, carefully searching for suitable fish, before it eventually dived in to make a successful catch at the first attempt. Practice makes perfect.

It then flew off to a nearby telephone post to devour its prey.

Anyone interested in the plight of the Osprey (Pandion haliaetus) on the Canary Islands, and the conservation challenges posed here, might like to check the Youtube link below. The talk is a summary of a Canary Island Government project co-financed by the European Union. It is in Spanish, but contains plenty of graphic material and photographs.

The juvenile Osprey marked KL9, first detected on Sep 20, has now been on the island of  La Palma for 4 weeks. During this time, I have been regularly checking its movements and have also received regular updates from a local family who observe the Dos Pinos reservoir from their terrace (thanks Íñigo!).

The regional delegation of SEO/Birdlife on Tenerife, and La Palma's environmental authorities have been informed of the bird's presence. It appears there has been at least one previous case of an Osprey (Pandion haliaetus) overwintering on Gran Canaria, rather than continuing its migration to Senegal and Gambia. So, perhaps KL9 will be here for a while!

I found KL9 (whose sex is unknown) resting on a utility pole near the Dos Pinos reservoir this morning, Oct 17. 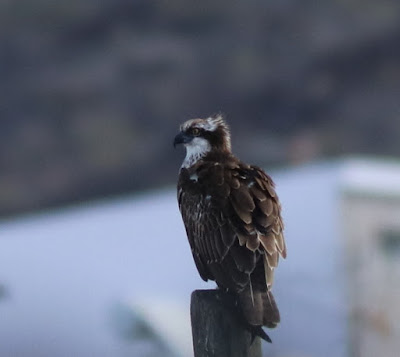 The above photograph was taken from a distance, and I was careful not to disturb the bird by trying to get a better shot. Instead, I headed for the reservoir to await arrival of the young Osprey. The bird soon appeared as expected, beginning its activity with an exploratory flight over the water. 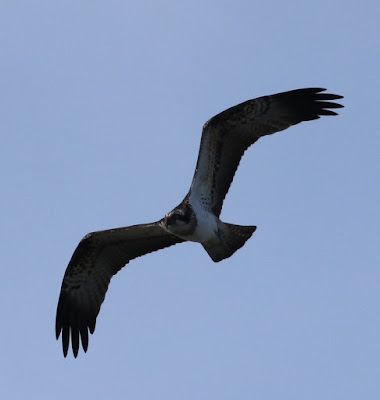 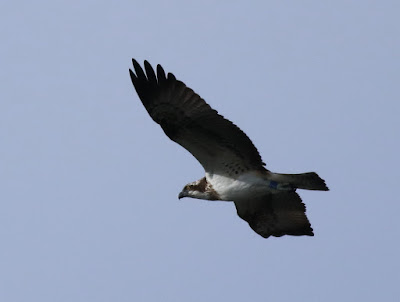 Without attempting to fish it then spent a few minutes resting on the bank of the reservoir. I had my tripod set up this time, hoping to improve on my previous photographs. The Osprey took flight again, and after briefly surveying the water, dived towards its prey: 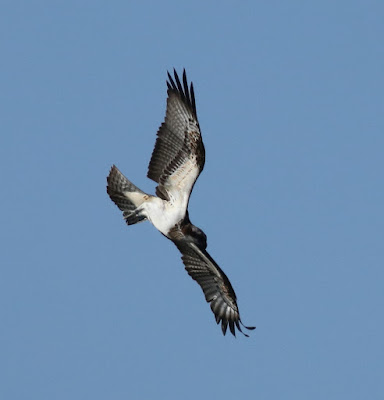 The following shots were all taken with a 400mm lens and a fairly high ISO 400, to get a fast shutter speed. The pictures are all heavily cropped, but are probably at the limit of what my gear can achieve, given the distance from the subject (c 200m). 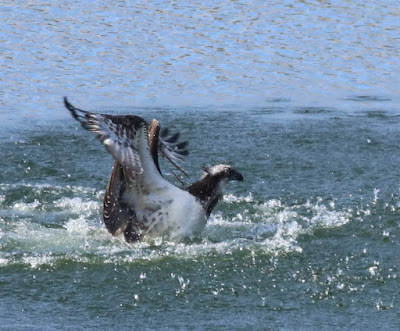 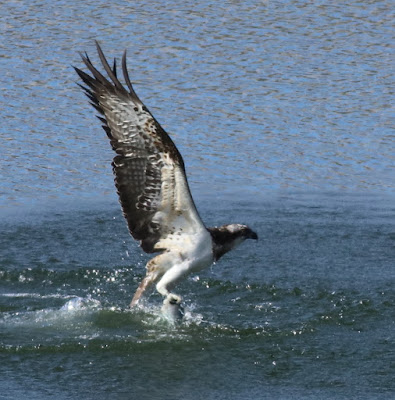 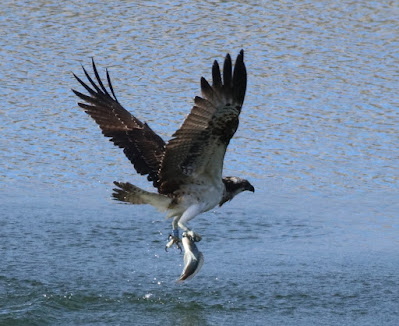 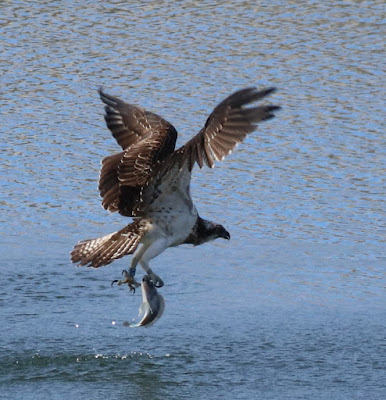 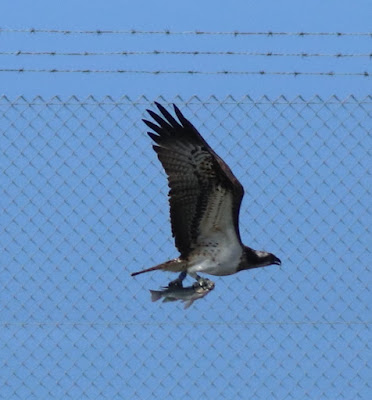 Osprey KL9 making off with its catch

It took the bird less than 2 minutes to catch its first meal of the day, after only one dive...a 100% success rate.

The ringed Osprey KL9 was at the Dos Pinos reservoir this morning, where I watched it fishing. The bird dived towards prey on three occasions, with complete immersion the second two attempts. The last of the three attempts brought success in the form of a sizeable catch, the whole process having taken just over two minutes. Thus, a 1-out-of-3 success rate after a couple of minutes of strenuous activity...not bad for an inexperienced, first-time migrant!

So, contrary to my earlier comments (see previous posts), to the effect that the reservoir basically functions as a safe refuge for birds, it is now clear that the site is also providing the juvenile Osprey (Pandion haliaetus) with an abundant, easy-to-catch food supply.

The following action photos are all heavily cropped, but are certainly an improvement on my previous ones. 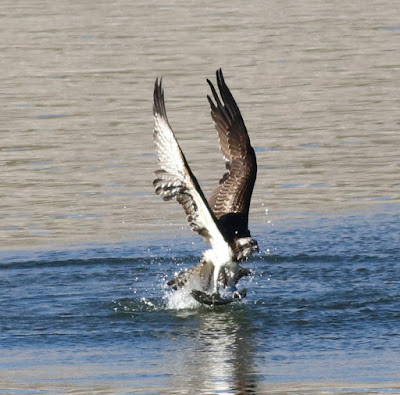 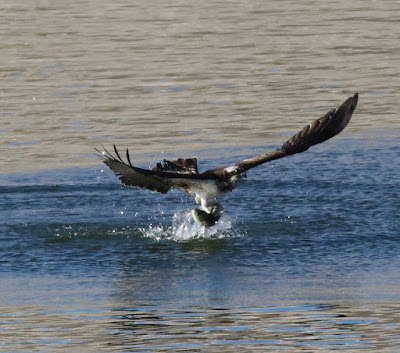 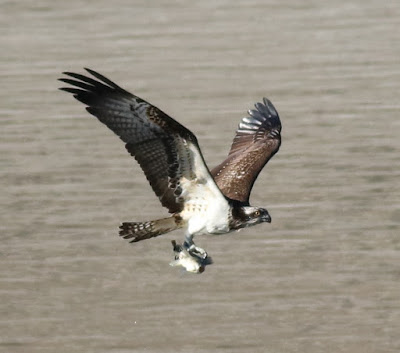 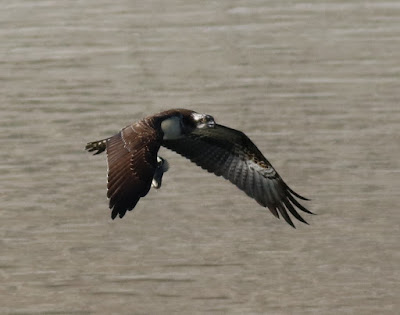 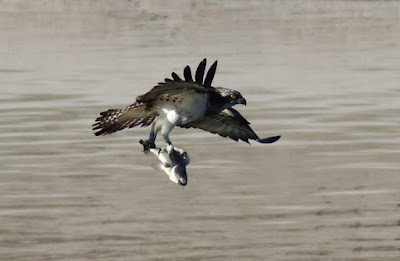 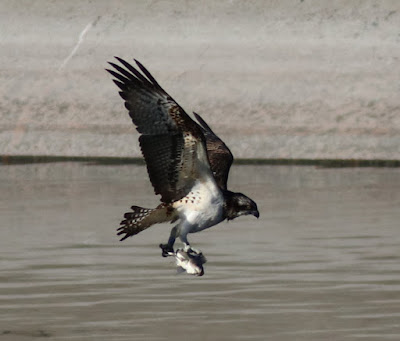 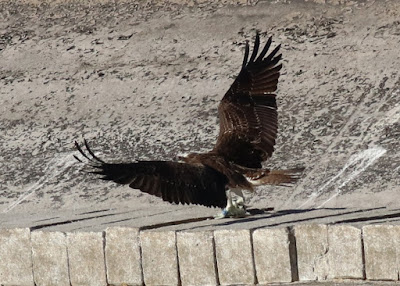 Osprey (Pandion haliaetus) landing with catch
The fish themselves (Tilapia sp.) got there as a result of an unsuccessful fish-farming project. It is not clear whether they were deliberately introduced into this particular reservoir, or were accidentally transferred from other ponds involved in the aquacultural experiment.
Publicado por Robert Burton en 12:31 No hay comentarios:

The 1w Citrine Wagtail (Motacilla citreola) was still present at the saltpans in Fuencaliente this morning, Oct 2. The bird was making short runs to snatch insects off the ground, and springing to catch flying ones. 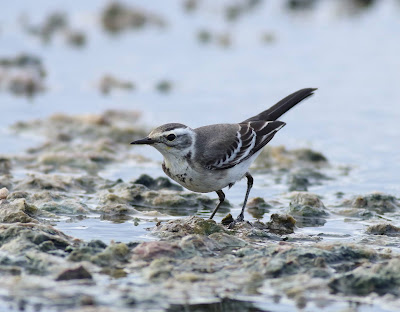 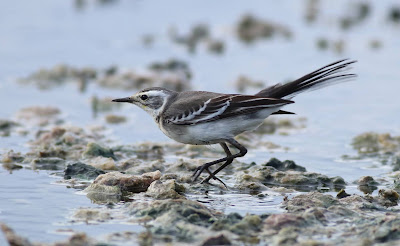 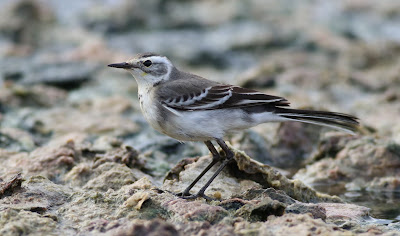 I particularly like the impression of movement in the middle image above, which was shot at 1/400s  ISO 400  f5.6.