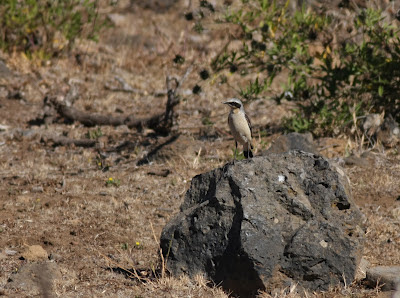 A passage migrant with records from all the main Canary Islands - as well as from La Graciosa, Alegranza and Lobos - the Northern Wheatear (Oenanthe oenanthe) has been sighted on La Palma several times in recent years. For example, in September 2007, I discovered 3 birds (a male, a female and an immature) only a few hundred metres from the location shown in the present post, an area known as Llano de las Cuevas (El Paso). 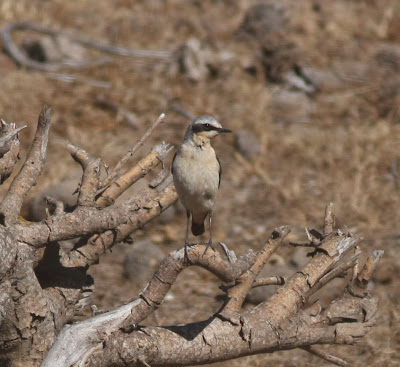 In general, autumn sightings are more frequent on the Canaries than spring ones, and another was featured in http.//avescanarias.blogspot.com on Oct 22 2010, with a photo by I. Brito. On that occasion, the solitary bird was discovered in an area of irrigation tanks in Las Martelas (Los Llanos de Aridane). 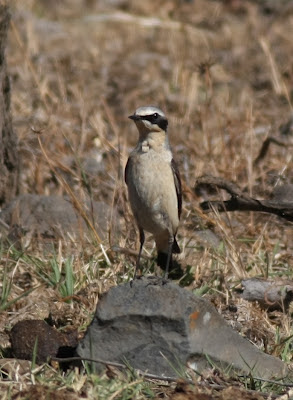 As can be appreciated in the present images, on this occasion the individual was a male, found foraging on the evening of June 5 in a group of stony fields containing tagasaste bushes (Chamaecytisus proliferus), in which small numbers of horses graze. The photos shown here were taken on the morning of June 6. 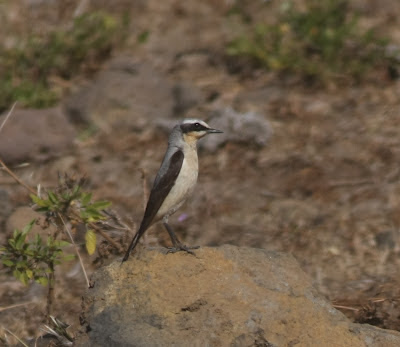 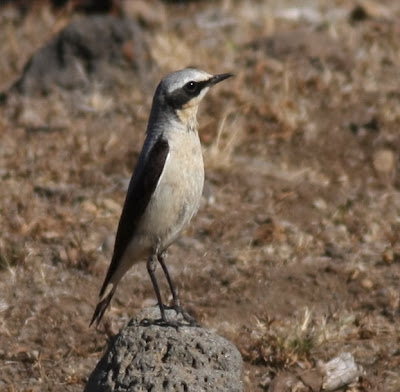 Llano de las Cuevas is situated in the high part of El Paso, just north of the National Park Visitor Centre, and has attracted a number of interesting migratory birds in recent years, including Short-eared Owl (Asio flammeus), Montagu's Harrier (Circus pygargus), Northern Lapwing (Vanellus vanellus), and Red-footed Falcon (Falco vespertinus). It is also a classic location for residents like the Red-billed Chough (Pyrrhocorax pyrrhocorax) and the Stone-Curlew (Burhinus oedicnemus). 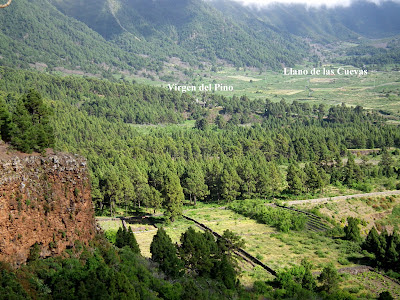 Distant view of Llano de las Cuevas looking south from Valencia. The asphalted lane running from left to right at the foot of the rocky outcrop is the access road to the Cumbrecita viewpoint.
Publicado por Robert Burton en 22:47 No hay comentarios: 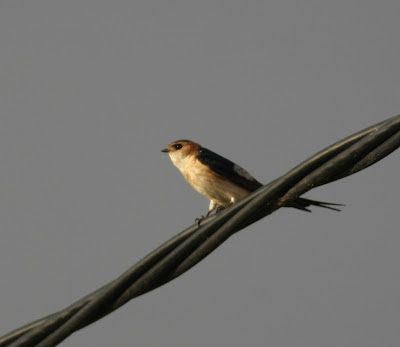 As mentioned in the previous post, the Red-rumped Swallow (Cecropis daurica) is a fairly scarce passage migrant to the Canaries, with records from all islands. The present individual was found foraging with a flock of 12 Barn Swallows (Hirundo rustica) and 2 House Martins (Delichon urbica) at an irrigation pond in Tazacorte on June 4. 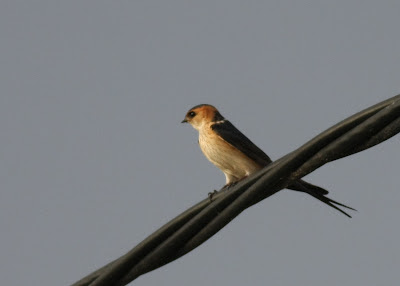 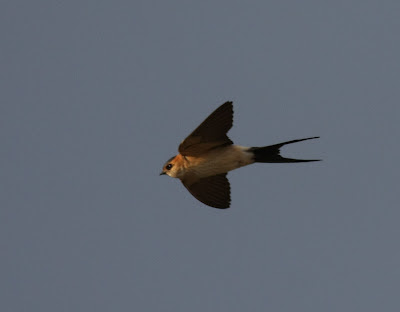 In flight, the species appears to be approximately the same size as the Barn Swallow, but glides more frequently and for longer periods. From below, the pale underside of the head, and the black ventral area are other conspicuous aids to identification. The "red rump" of the bird's name is only visible when light and angle of view are appropriate, as in the following image: 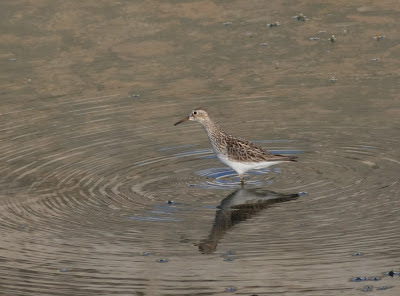 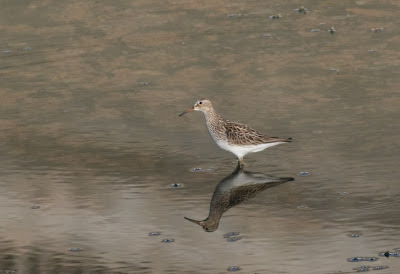 The bird shown in the present post was foraging together with a solitary Greenshank (Tringa nebularia), and was photographed on June 3. A visit to the same pond on June 4 revealed only the Greenshank to be still present, so perhaps the American wader has already flown on. 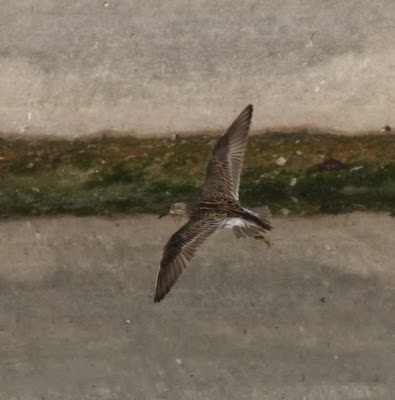 The above image allows plumage details on the bird's back to be appreciated, including the narrow, indistinct central wing bar, the dark-centred rump, and the absence of contrasting tail bands characteristic of similar-sized, visiting waders such as the Wood, Green and Common Sandpiper (Tringa glareola, T. ochropus and Actitis hypoleucos).

While photographing the above species, I spotted the following raptor perched on the roof of a greenhouse about a hundred metres away. Unfortunately, the bird took flight almost immediately and I was unable to get closer to improve on the pictures. Swifts were foraging in the area at the same time - one of the prey items the Hobby (Falco subbuteo) is apparently able to catch in the air - and abundant dragon flies, another potential source of food, were also present at the nearby irrigation ponds. 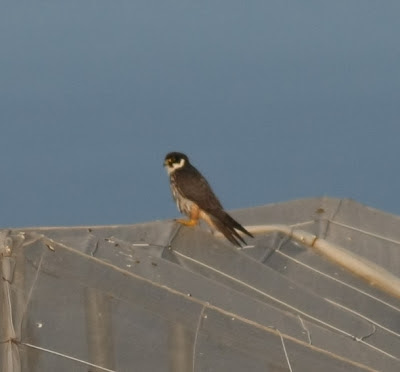 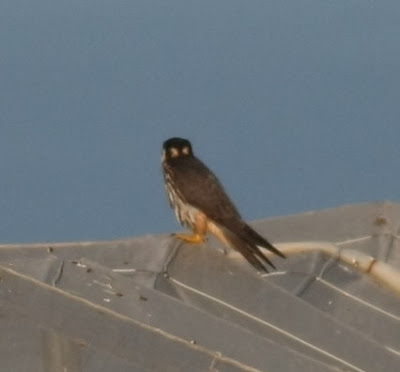 According to the "Field Guide to the Birds of Macaronesia" (Eduardo García-del-Rey, Lynx Edicions 2011), this medium-sized raptor is a passage migrant to the Canary Islands, with previous records from La Palma, Tenerife, Gran Canaria, Fuerteventura, Lanzarote and Alegranza.
Publicado por Robert Burton en 10:15 No hay comentarios: