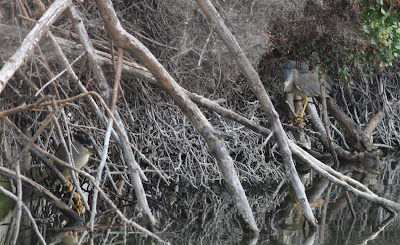 In recent years, the Black-crowned Night Heron (Nycticorax nycticorax) seems to have become a regular spring visitor to La Palma.  Up to four individuals have been seen on the island at the same time, but the two birds shown above came as a surprise, due to their earlier-than-usual arrival date. They were discovered at an irrigation pond in Tazacorte, where fading light, excessive distance and dense undergrowth made photography difficult. 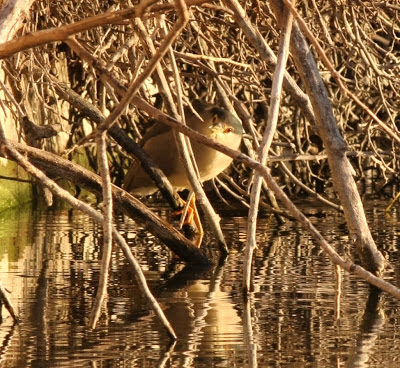 Just as the sun was setting, warmer light gave a glint to one of the bird's eyes, adding interest to the heavily-cropped photo above. Closer approach at this particular location is not feasible, unfortunately. 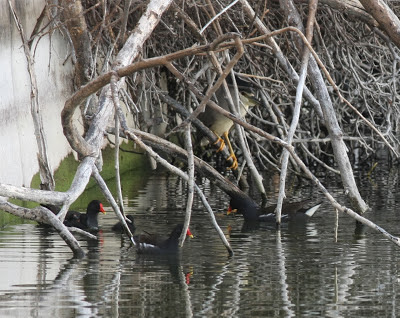 The second surprise at the same pond was the discovery of the first Moorhen (Gallinula chloropus) brood of 2013. The group consisted of three adult birds feeding three recently-born chicks. Care of younger siblings by juveniles from earlier, same-year broods is common in many rail species, and I have often observed such behaviour among Moorhens on La Palma. However, this is the first time I have seen fully-grown birds from one breeding season providing sibling care to their parent's offspring the following year.
Publicado por Robert Burton en 21:33 No hay comentarios: