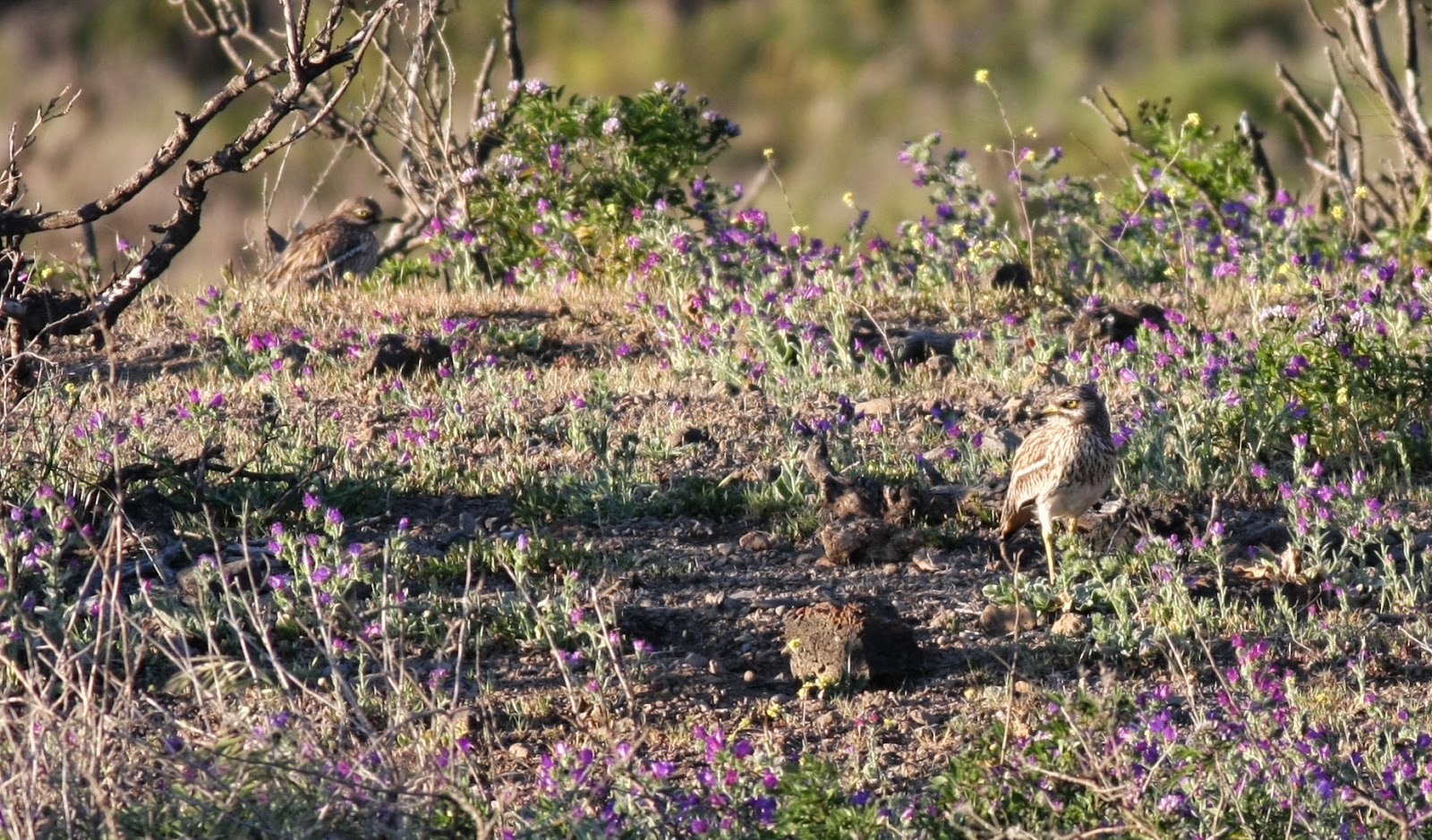 A difficult species to observe on La Palma, the Stone Curlew (Burhinus oedicnemus distinctus) was last featured in this blog back in March and April 2010. On that occasion, I was lucky to find a breeding pair closer to the edges of the fields, and the photos were therefore considerably better. In the first and third pictures of the present post, two birds can also be seen. 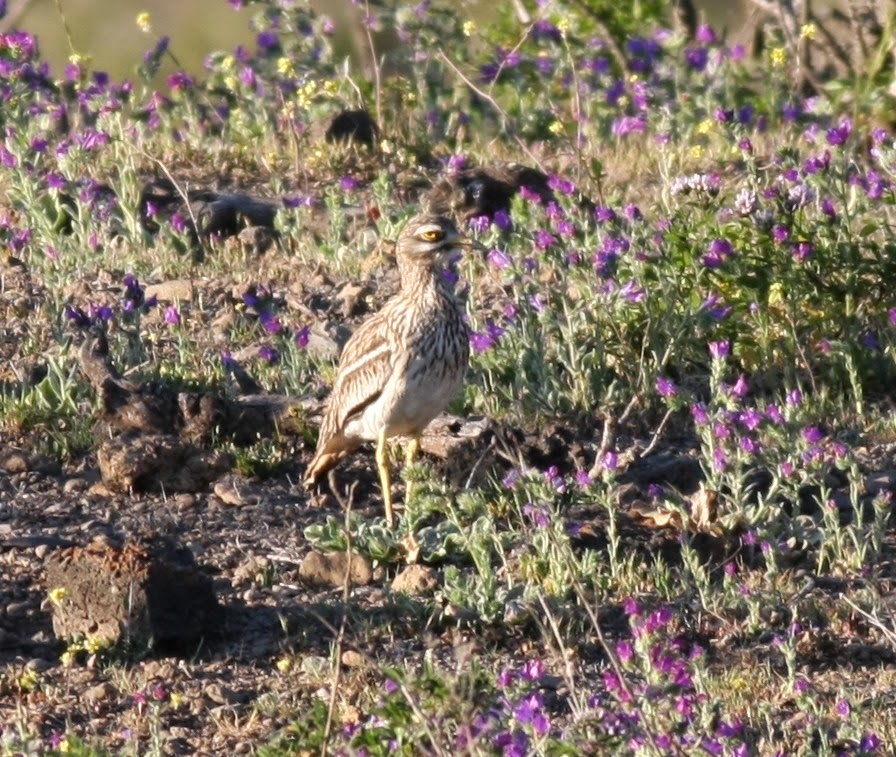 Two subspecies are found in the Canaries: B. o. insularum on Alegranza, La Graciosa, Lanzarote, Lobos and Fuerteventura, and B. o. distinctus on the central and western islands. In the case of distinctus, population figures vary considerably from island to island: Tenerife could have 50-60 breeding pairs, La Gomera 20 pairs, El Hierro as many as 100 pairs...whereas the estimated figure may be as low as a dozen pairs for La Palma. Such low numbers are attributed to loss of habitat, and human disturbance in what little suitable habitat remains (Atlas de las Aves Nidificantes en el Archipiélago Canario 1997-2003, Ed. J. A. Lorenzo, Madrid 2007). A potential breeding pair is currently occupying a field in Llano de las Cuevas (El Paso), in which the species has successfully bred in the past. The birds can be observed through binoculars at distances of 50-100 metres. Dog-walkers, joggers, and horse riders all use the path around the field, but their movements are partly screened by a stone wall. Stray dogs and cats occasionally cross the field itself. 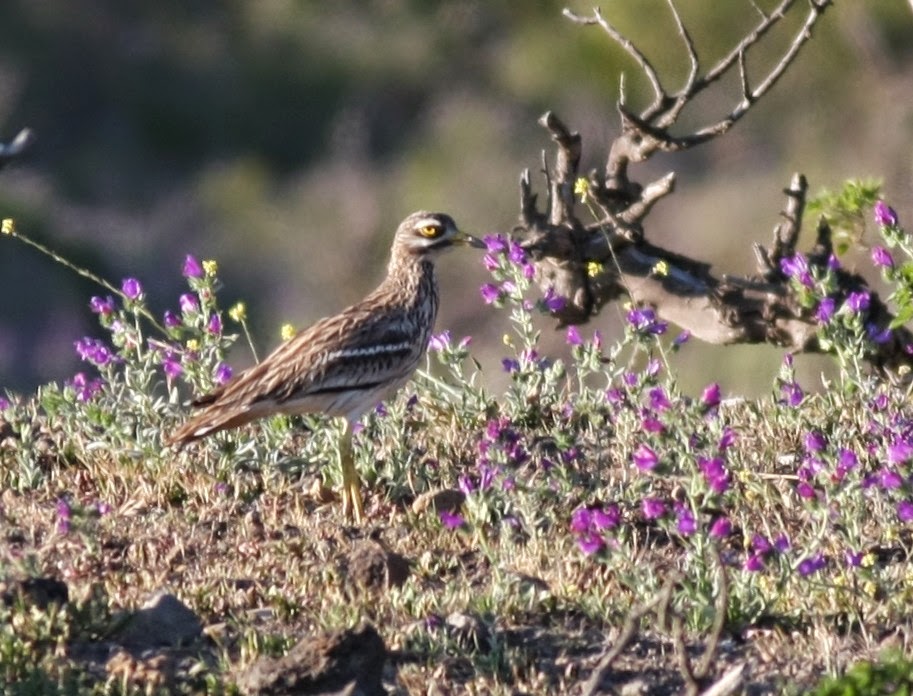 Provided the habitual level of disturbance does not increase dramatically, there is a good chance of reproductive success for the species at this location. 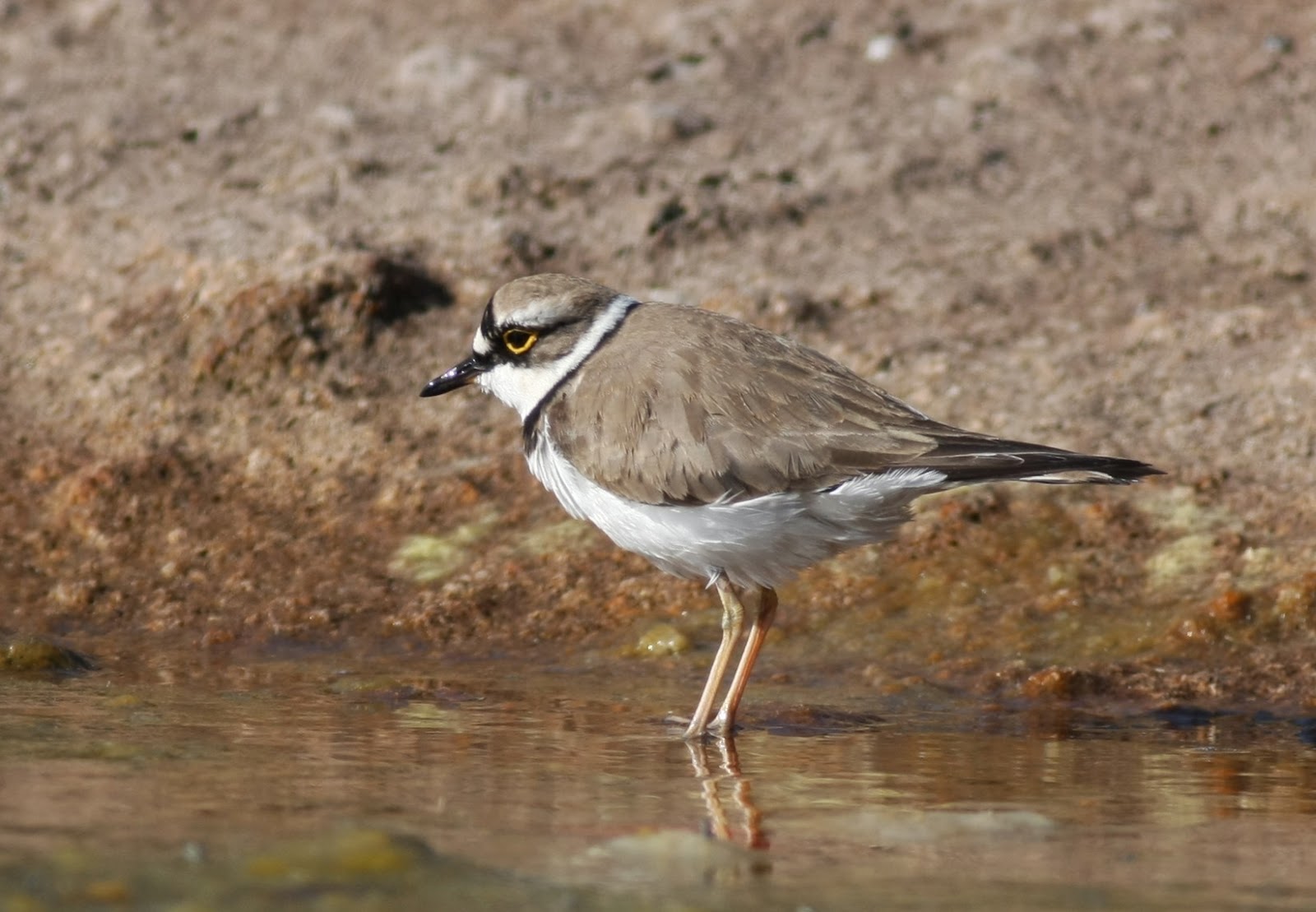 There were a number of British birders on the island at the beginning of March, some of whom contacted me directly and/or posted reports in BirdForum. One of the visiting observers (T.R.) discovered a Little Ringed Plover (Charadrius dubius) at the saltpans in Fuencaliente on March 5, presumably the same bird I photographed this evening at the same location. 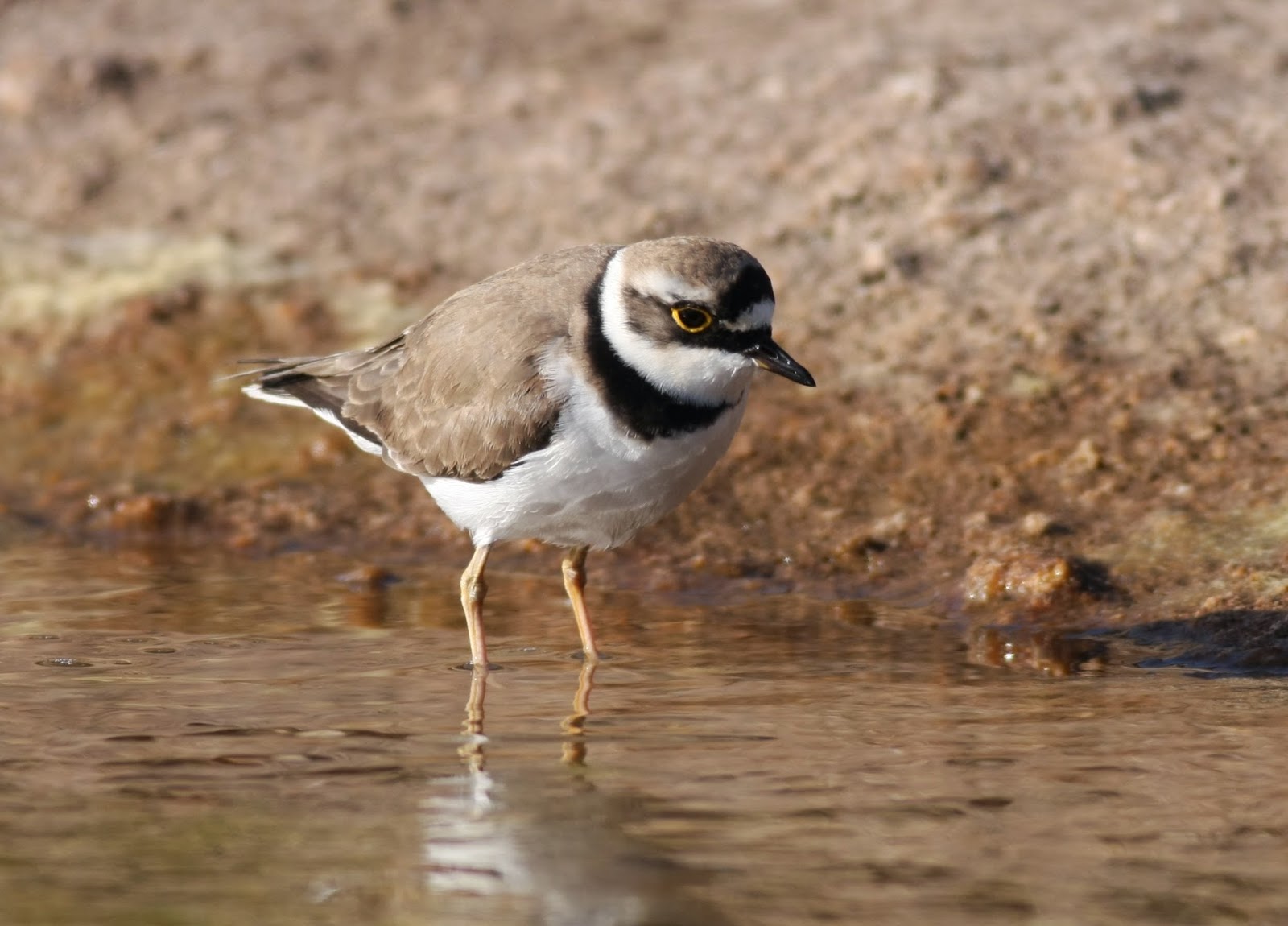 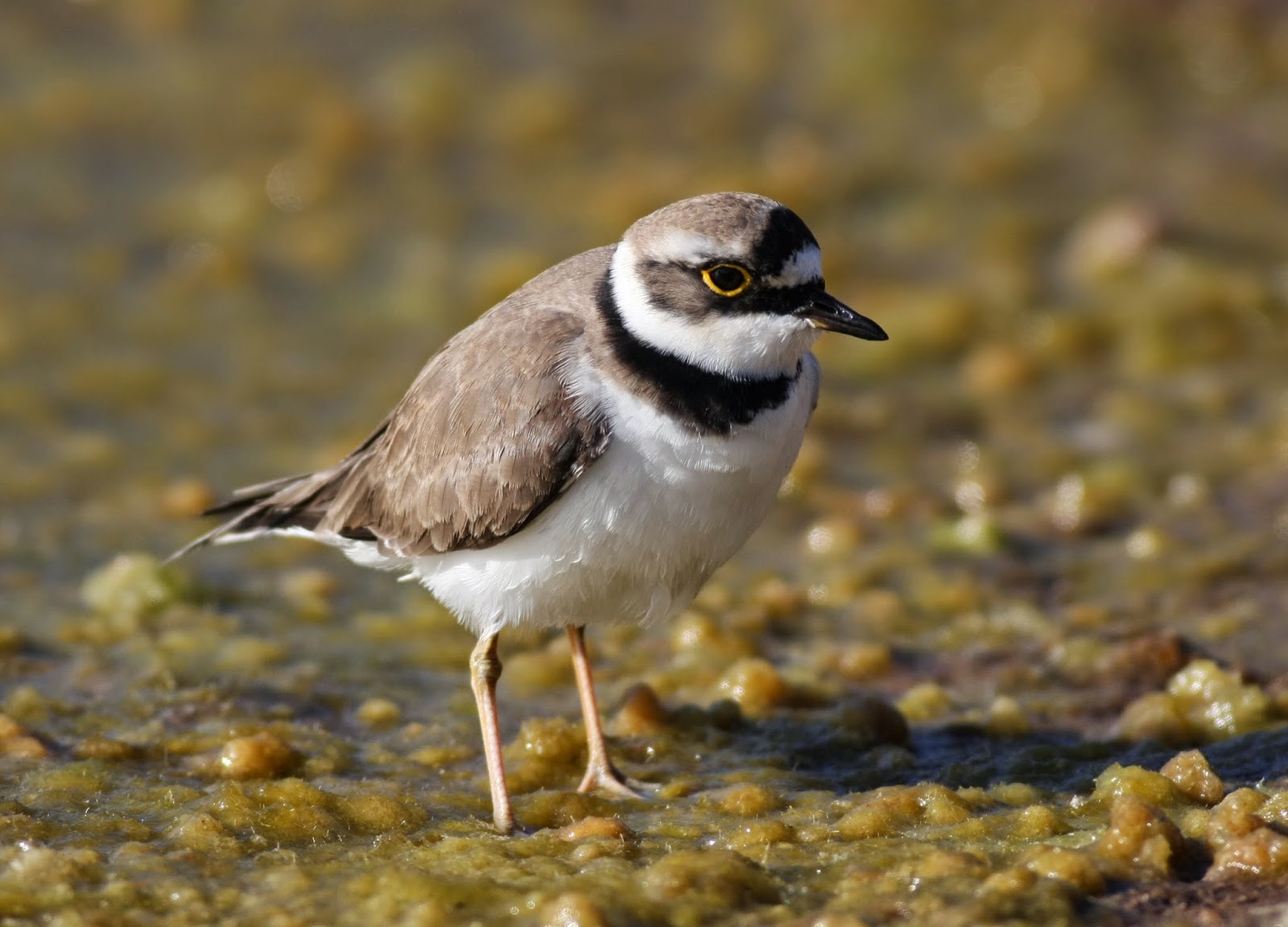 The Little Ringed Plover is resident on Tenerife, Gran Canaria and Fuerteventura, and is a passage migrant to all the other Canary Islands. I have seen several on La Palma in recent years, more frequently at the irrigation basins in Las Martelas (Los Llanos de Aridane).

Visisting observers are requested to send their sightings of migratory birds on the Canaries to the Regional Recorder, Juan Antonio Lorenzo: jalorenzo@seo.org Alternatively, you can send your records to me, and I will forward them. Sightings of interest are published in Ardeola, the SEO/Birdlife magazine.
Publicado por Robert Burton en 21:11 No hay comentarios: