The two White-rumped Sandpipers (Calidris fuscicollis) were still present at the saltpans (Las Salinas) in Fuencaliente this afternoon, Nov 27.

The Common Shelduck (Tadorna tadorna) was also still at the site. 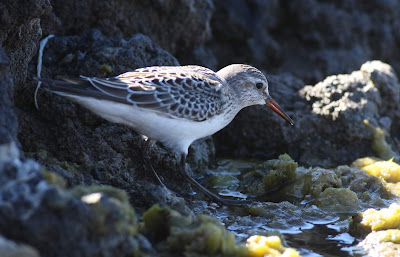 I returned to the saltpans in Fuencaliente at about 11 this morning. The Common Shelduck (Tadorna tadorna) was no longer to be seen, but the 2 x White-rumped Sandpipers (Calidris fuscicollis) were still present at the site.

This post shows more images of one of the two sandpipers. The second bird was foraging by itself, along the far side of one of the pools, and the two stayed away from each other during the hour I spent observing. 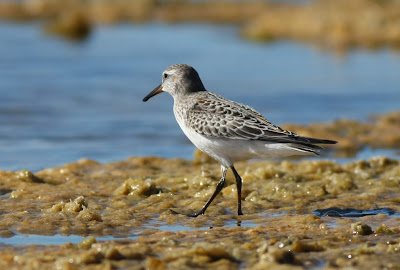 As commented in my previous post, there is a striking amount of brown on the bird's bill. In my experience of this species to date, the brown had always been restricted to a small area at the base of the lower mandible. 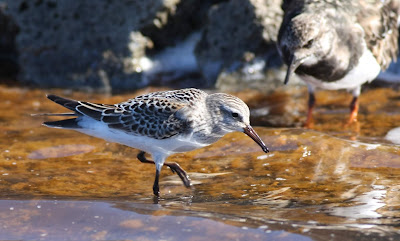 The extremely long primary projection can be appreciated in the image above, and the white rump is also discernible. For size comparison, note the Ruddy Turnstone (Arenaria interpres) top right. 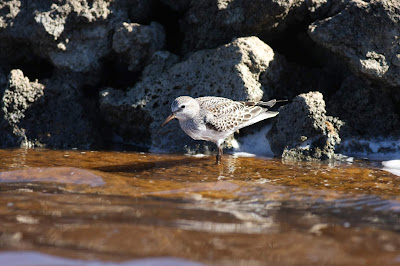 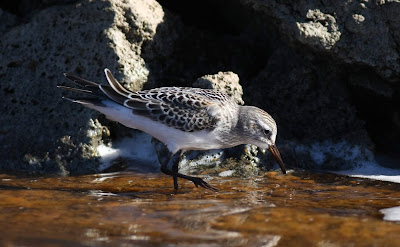 I will probably make another trip to the saltpans this week, in the hope of being able to photograph the two Nearctic waders together. An Atlantic depression is forecast to hit the island by tomorrow, with rain for the next three days. The bad weather could possibly influence the length of the birds' stopover.

In addition to the species featured in the last 3 posts, the following migrants can also be expected at the saltpans, at the time of writing: 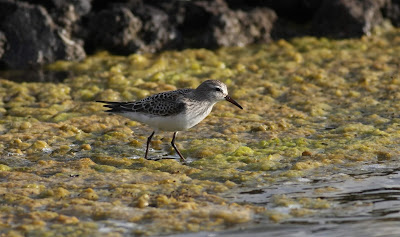 As briefly mentioned in my previous post, two Nearctic waders were present at the saltpans yesterday afternoon (Nov 19), in addition to the Common Shelduck (Tadorna tadorna).

In recent years, the White-rumped Sandpiper (Calidris fuscicollis) has almost become a regular visitor to the island, with birds often arriving in pairs. According to the latest 2018 SOC (Sociedad Ornitológica Canaria) checklist, 12 of the 57 Canary Islands records have been on La Palma, either at the saltpans in Fuencaliente, or at the irrigation ponds in Las Martelas (Los Llanos de Aridane). The present sighting now brings the figure to 13, from a total of 58 records. 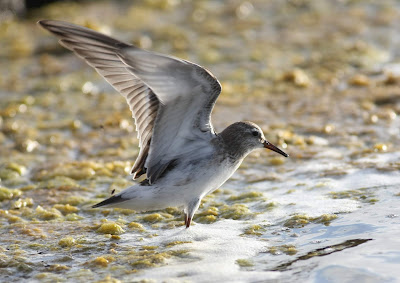 The bird shown in the first 3 images was easy to photograph and obligingly raised its wings at regular intervals to reveal its distinctive white rump. 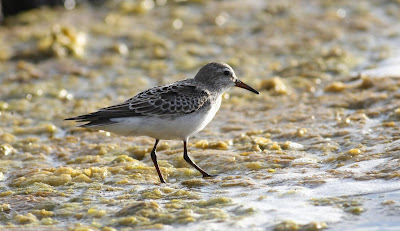 The second bird, shown in the last image below, remained at a greater distance from the pool edges. The extent of pale brown on its bill is partly due to translucence caused by late-afternoon sunlight, but the impression is remarkable nevertheless. Its apparently warmer plumage tones can also be attributed to the effect of lighting. 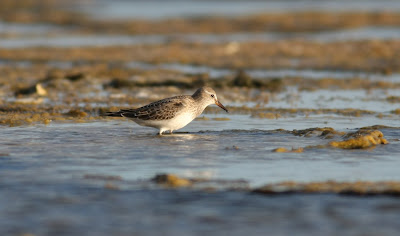 This record will be submitted to the Spanish Rarities Committee in due course. 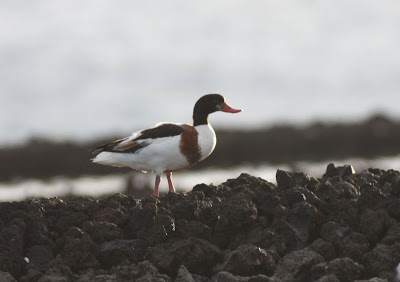 This morning, I was alerted by Eduardo García-del-Rey that a Common Shelduck (Tadorna tadorna) had recently been reported on La Palma. The author of this interesting sighting is unknown to me, and the bird's precise location on the island was not given either. 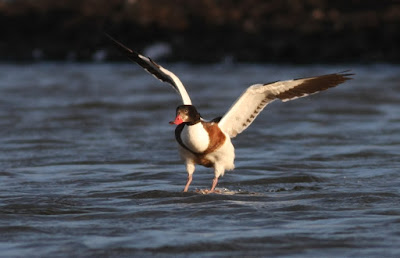 The logical place to search was at the saltpans in Fuencaliente. Mainly, because the habitat is suitable, and there had been a previous sighting of 5 Common Shelducks (Tadorna tadorna) way back in 2004, but also because it is a popular spot for visiting birders. 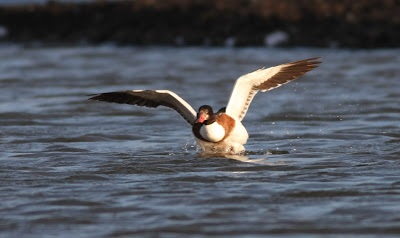 I arrived at the saltpans at about 5pm this afternoon, and found the Shelduck there, resting on one of the stone embankments in the middle of the complex. The bird was difficult to approach, and the light was from the wrong angle for satisfactory photos. I managed to take several of similar quality to the first picture above.

I then moved to another position to observe some Nearctic waders (see forthcoming post), and was rather surprised to see a tourist with a camera moving around the saltpan complex, calmly entering the no-access areas and evidently about to flush the Shelduck. Sure enough, the bird took flight, but promptly landed in one of the pools, allowing me to capture the last three pictures in this post.

The Common Shelduck (Tadorna tadorna) is a rare visitor to the Canary Islands, with only 13 records, mainly from Gran Canaria. All records are from October-January, but predominantly in November-December. (Note that there may have been a few more since this information was published in "Rare Birds of the Canary Islands" by Lynx Edicions in 2013).

There has apparently been a very recent record on Tenerife, so with the present one on La Palma (possibly the same bird as on Tenerife), the total number of records now stands at 17.