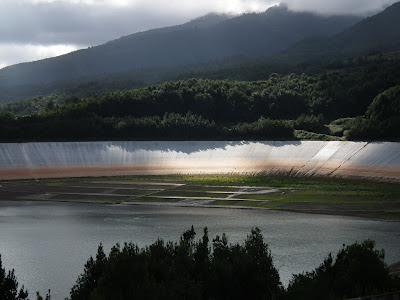 The present post provides information on one of La Palma's birding sites, and is intended to be of use to birders planning a trip to the island...

The reservoir known as the Laguna de Barlovento is considered a likely spot at which to find migratory species, and is mentioned in Tony Clarke's "Birds of the Atlantic Islands" (Helm, 2006). It is located up in the far northeast corner of La Palma and could be combined with a visit to the laurel forests of Los Tilos and/or Cubo de la Galga, if you're birding on the island.

The reservoir is completely fenced-off and only distant views of the water surface are possible. A telescope is highly recommended, but don't expect too much even then! When water levels are high, all you usually see are bare concrete banks and a few Yellow-legged Gulls (Larus michahellis) bathing far out in the middle. Not very inspiring stuff at all, and at that point you may well find yourself wondering if it was worth the long drive to get there. However, before leaving the area, it's worth checking the nearby duck-pond with its surrounding parkland, located close to the bar-restaurant and leisure facilities.

In April 2011, the reservoir burst its banks at one point, and most of its valuable content gushed down a nearby gulley into the Atlantic. Fortunately, no serious damage to property or personal injuries resulted, but the basin has remained partly empty ever since : 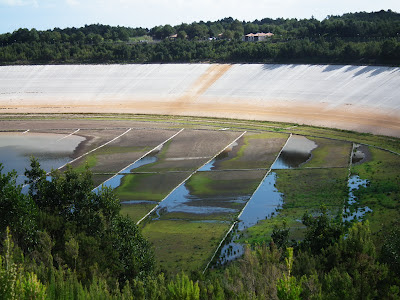 Still pending repairs, an attractive wetland habitat has developed in the bottom, and today (Feb 7) I decided to investigate. Apart from the inevitable Yellow-legged Gulls, I saw 3 male Teal (Anas crecca), 3 Snipe (Gallinago gallinago), 1 male Shoveler (Anas clypeata), 12 wintering Coot (Fulica atra), and what looked like a Bar-tailed Godwit (Limosa lapponica). Weather conditions were far from ideal, and my telescope was vibrating in the blustery wind: I only had about 20 minutes observing before a cloud swept in and it started raining.

The best places to set up a telescope are the two viewpoints located near the point where the reservoir fence is first reached. One is above the road on the left, at the top of a short flight of steps. There is a sign saying Mirador de La Laguna but, strangely, no proper parking space other than a small area in front of the gate on the right. The other, quieter viewpoint is reached via the steps on the right.

If you are birding on the island this winter or  spring, the Laguna de Barlovento is well worth a visit...
Publicado por Robert Burton en 22:12 No hay comentarios: