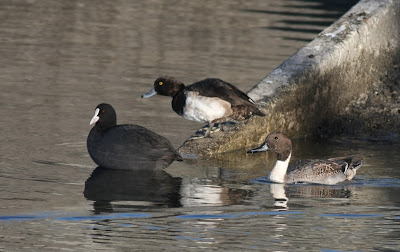 Above is a shot of the main irrigation pond in Las Martelas, where, on December 20, there were 4 Coots (Fulica atra), one Tufted Duck (Aythya fuligula) and one Pintail drake (Anas acuta) - interestingly, not the same eclipse male shown in a recent post (see 16/11/2013). Hardly an overwhelming abundance of waterbirds, but fairly typical of La Palma's winter season. 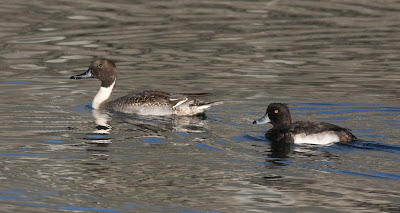 In another one of the ponds there are 43 wintering Coots, but so far, I have only discovered 4 Teal (Anas crecca). In a good year, the total can reach the thirty mark. Below, a couple more pictures of the handsome male Pintail: 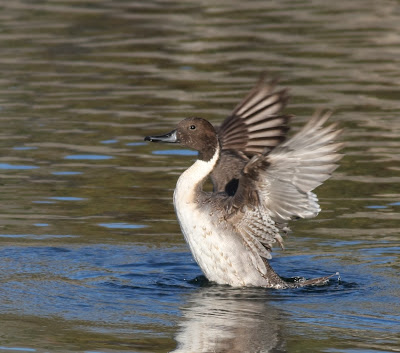 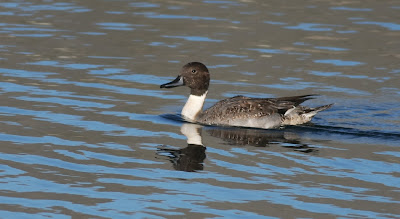 Elsewhere on the island, the pale morph Booted Eagle (Hieraaetus pennatus)  has been seen regularly over the last few days on the east side, and a pair of Barbary Falcon (Falco pelegrinoides) have begun their mid-air courtship displays.

A trip to the saltpans in Fuencaliente  is pending, and also a check on the Semipalmated Plover (Charadrius semipalmatus) at the airport pools. Stay tuned. 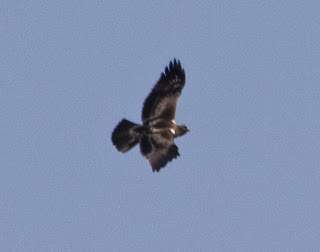 The Booted Eagle (Hieraaetus pennatus) is a regular but scarce passage migrant in winter on the Canary Islands. On La Palma, solitary birds are reported almost every year, with as many as five individuals on the island simultaneously in 2007. Not much larger than the resident Common Buzzard (Buteo buteo), and often flying at considerable altitudes, their presence is easily ignored. 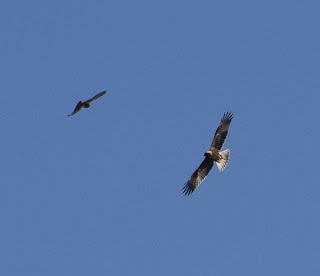 The same bird, being harassed by a kestrel. Photo: Antonio Camacho Lorenzo

The first two photographs in the present post were kindly sent to me by Antonio Camacho Lorenzo, who observed this dark morph bird in Los Barros (Los Llanos de Aridane) on Dec 14.

However, the first notification of Booted Eagle received this year came from a visiting birder (John Perry) who saw a pale morph specimen above the Parador in Breña Baja on Oct 24. I made a couple of unsuccessful attempts to find his bird, but it wasn't until Dec 13 that I spotted a pale morph eagle soaring above the Risco de la Concepción viewpoint near Santa Cruz: possibly the bird observed by John Perry? As usual, the migrant raptor was being persistently harassed by kestrels and a small flock of Red-billed Chough.

Returning to the viewpoint today (Dec 15), I had distant views of the same pale morph bird, and managed to get the two pictures below...proof that there are at least two Booted Eagles on the island at the moment. 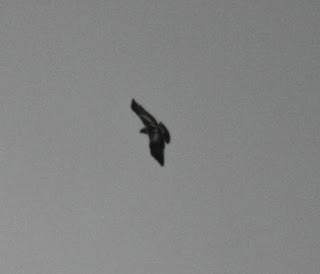 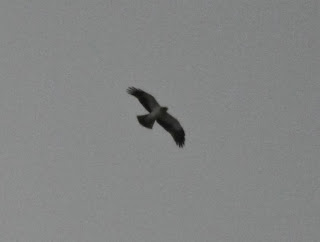 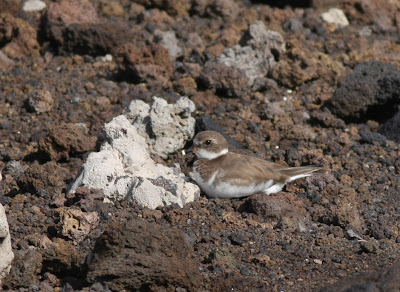 The present post is an update on the Semipalmated Plover (Charadrius semipalmatus), which has appeared a number of times in this blog to date. This extremely rare Transatlantic migrant - only the fifth sighting of the species for Spain - was first discovered at the beginning of October by two visiting birders, and has subsequently been seen by several other observers at the same location.

I have been checking the airport pools at regular intervals in recent weeks, to see if the bird is still there, and this morning I had no intention of photographing it. However, conditions were favourable, there were initially no disturbances, and my subject was in a convenient spot. In the shot above, it can be seen resting amid chunks of broken lava.

Unfortunately, its rest period was destined to be brief... 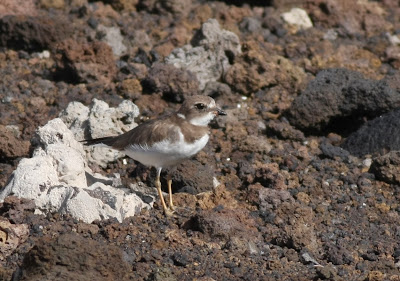 Shortly after the bird had settled down, a noisy family arrived on the scene with two dogs, one of which came sniffing towards the plover, followed by its owner. The bird logically took flight, together with its companions, three Ringed Plover (C. hiaticula).

It is surprising that this migrant has remained for so long in what is an extremely popular, totally unprotected area.

There are also several other waders present at the pools: