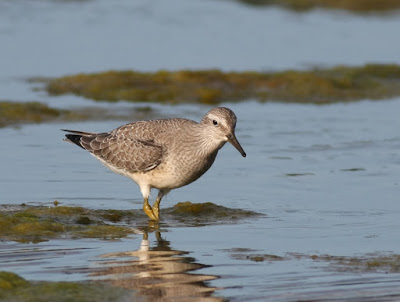 The first evidence of the 2015 post-breeding migration has already appeared on the island in the form of various Palearctic shorebirds. At the saltpans in Fuencaliente this morning, I discovered 2 x Red Knot (Calidris canutus), 2 x Sanderling (C. alba), 1 x Dunlin (C. alpina) and 1 x Ringed Plover (Charadrius hiaticula)...plus about 10 x Turnstones (Arenaria interpres).

Of the bunch, the two Red Knot (C. canutus) were of greatest interest. The species is classed as a passage migrant to all the Canary Islands (except La Gomera), but is not recorded every year on La Palma. According to my own notes, Red Knots tend to reach the island in late August-early September, ahead of most other waders. 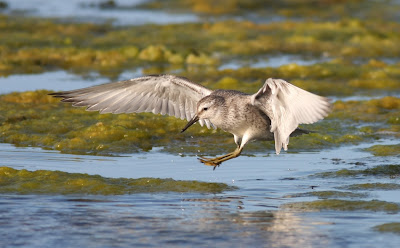 All the shorebirds observed at the saltpans this morning were foraging intensely in the main pool which was in the process of being emptied. One of the Red Knots is shown above "jumping" from one patch of algae to the next, as the water-level descends. 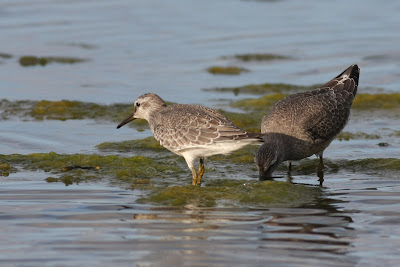 Neither of the two Knots displays a creamy-buff or peach tinge on the breast, yet the leg colour, and the neat upperparts and wing coverts (with pale fringes and dark sub-marginal lines) seem to indicate juvenile birds. 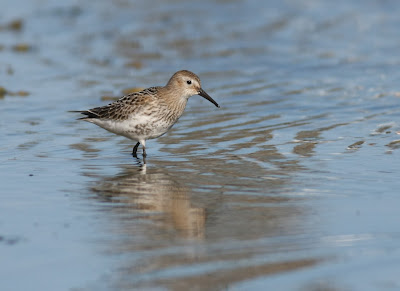 Elsewhere on the island, a visit to the irrigation ponds in Las Martelas (Los Llanos de Aridane) yesterday evening produced one Ruff (Philomachus pugnax), and two Green Sandpipers (Tringa ochropus), but there was only one Common Sandpiper (Actitis hypoleucos) at the airport pools this morning.
Publicado por Robert Burton en 17:50 No hay comentarios: