This is the final part of my account of the second breeding attempt of Little Ringed Plover (Charadrius dubius) on La Palma. In a forthcoming post I will attempt to draw conclusions from this prolonged period of monitoring.

Territorial behaviour by the male plover, July 11. Here, a pair of European Turtle Doves (Streptopelia turtur) are expelled from the feeding area.
Both male and female plovers defended their territory against avian intruders, which included Berthelot's Pipit (Anthus berthelotti) and Grey Wagtail (Motacilla cinerea), in addition to the European Turtle Dove (Streptopelia turtur) shown above.

The three chicks plus parent foraging in the wet sand, July 11
The weekly water delivery evaporated after about 5 days, with damp sand remaining until the next tankerload arrived. 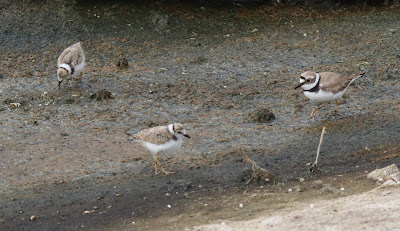 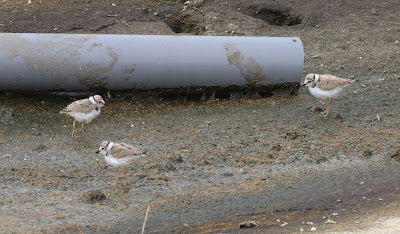 All three chicks together, with the larger, first-born on the right. At this point in time (July 11) they are 14-15 days old.
Flight development
I was particularly interested in monitoring flight development, as it seemed inevitable that the brood of three chicks would eventually disperse. Backtracking a little, the chick shown raising its wings in the following image was just over one week old: 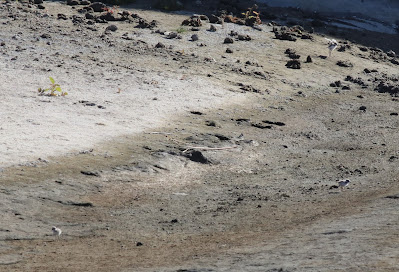 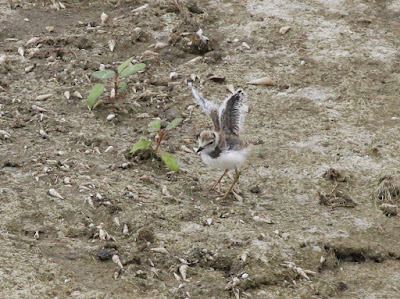 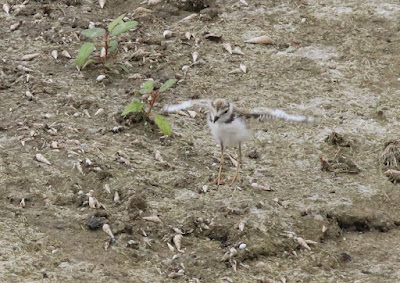 After wing raising, the next stage was jumping upwards, July 11. 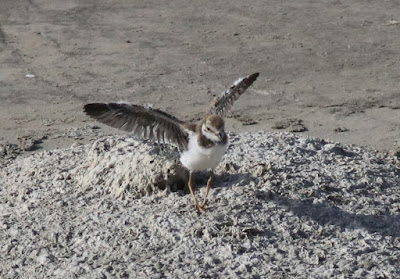 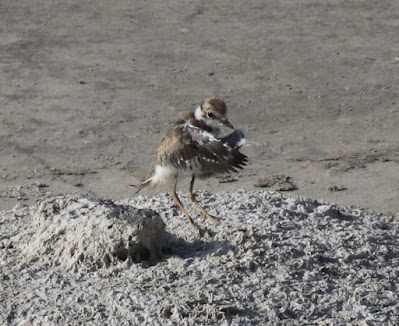 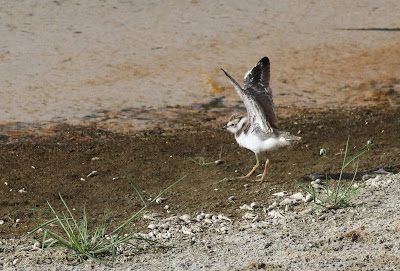 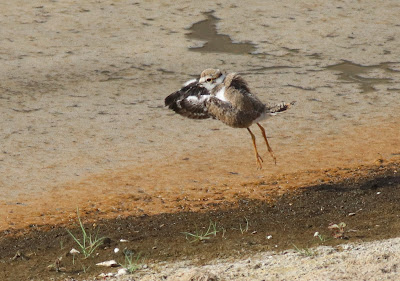 More flight practice from July 16
Just when everything seemed to be going smoothly, an unexpected turn of events occurred. On the morning of July 17 I found only two chicks, plus the two adult plovers. Predation could have taken place either during the night, or early the same morning, prior to my arrival at the site at about 09:30. The two adult birds were both present, and the male seemed to be distressed, suggesting that the attack was recent.
I returned in the evening and stayed until 21:40, partly to confirm that one of the chicks was indeed missing, partly to rule out daytime predation by kestrels.
At 07:30 on the following morning, July 18, only a single chick remained. Predation by cats or some other nocturnal predator seems the only explanation for this second disappearance. The matter will be dealt with in an upcoming epilogue.
The last time I saw all three chicks together was July 16. I did not photograph them on that date, but below is a picture from July 15:

All three chicks together in their rest area on July 15.
From roughly mid-July I observed Common Kestrels (Falco tinnunculus) in the vicinity with increasing frequency. The raptors would perch on the upper rim of the reservoir, or in the branches of tall Agave plants overlooking the plovers' feeding area. The kestrels' low, swooping flights usually ended with the adult plovers driving out the unwanted visitors. But how successful the raptors' hunting was during my absence is not known. 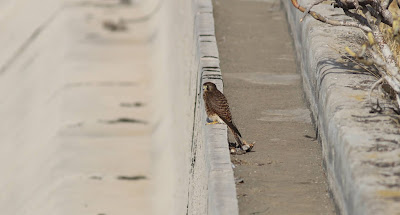 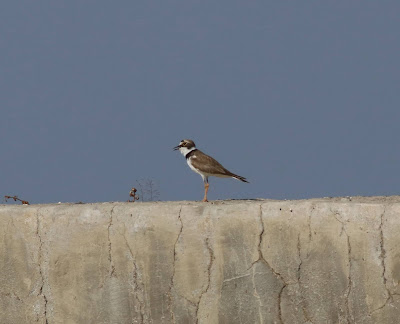 The adult plovers kept a close lookout for Kestrels (Falco tinnunculus), sounding the alarm from their vantage point on the highest part of the reservoir rim whenever danger threatened. 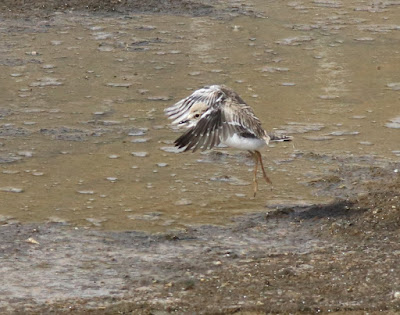 One of the two remaining chicks getting slightly higher above the ground on July 17. 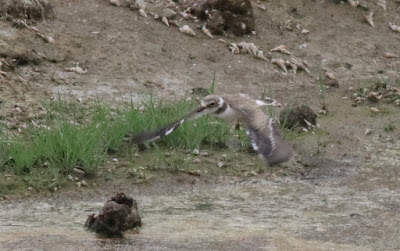 Finally, I witnessed true flight on July 21. In the images above and below, the single surviving chick is captured flying about half a metre above ground-level over a distance of not more than 10 metres. 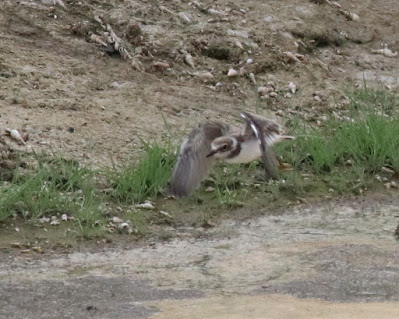 Low flight of the surviving chick on July 21. Here, the bird was 25-26 days old.
I last observed this immature bird at about 20:15 on July 23, by which time it was 26-27 days old. The following morning, July 24, it had gone. The adult female plover was still present and was seen intermittently for another few days, but by July 30 she had also left.
Thus, the second breeding attempt of Little Ringed Plover (Charadrius dubius) on La Palma came to an inconclusive end.
None of the newborn plovers have been seen at the breeding site or elsewhere in the vicinity since July 23. It is not clear whether the last-surviving chick became fully independent and successfully dispersed, or whether it unfortunately fell victim to daytime or nocturnal predators.
Publicado por Robert Burton en 15:22